The election of Donald Trump as US President in November 2016 sent a signal to investors that the Obama government sabotage of business was coming to an end.

Following 4 straight quarters of decreasing investment, investors poured a record-breaking $5 billion dollars into enterprise technology startups in the first quarter of 2017 alone – a nearly 80% increase from the previous quarter – across a record number of 237 deals. __ https://techcrunch.com/2017/04/17/breaking-records-enterprise-fundings-are-up-nearly-80-in-q1-2017/

Venture capitalists expect to obtain returns equivalent to 10X their investment, over the first five years of a successful startup. To that end, they typically take an active role in how startups are run and how funding is disbursed.

Some nations and cities are friendlier to businesses, and encourage startups. Venture capital is drawn to such nations and cities. The map above and the table below provide a general overview of the most business-friendly places. 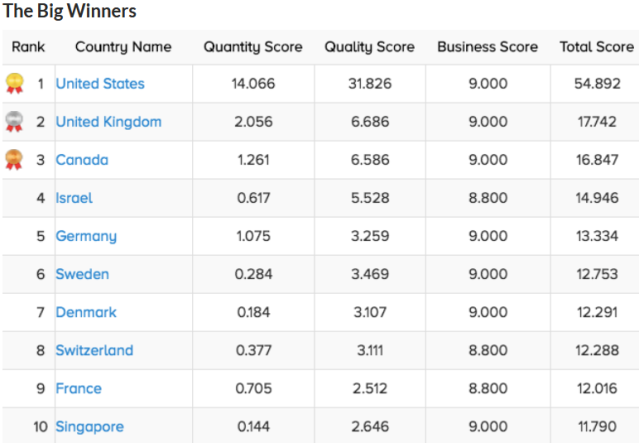 The map below shows the world’s leading centers for venture-capital investment globally. The largest dots, indicating the largest levels of venture capital investment, are located in the East and West Coasts of the United States, Western Europe, and around the mega-cities of China and India. The U.S. is the world’s dominant center for venture capital, accounting for nearly 70 percent (68.6 percent) of total global venture capital, followed by Asia and Europe with roughly 14 percent each (14.4 percent for Asia and 13.5 percent for Europe). __ https://www.theatlantic.com/technology/archive/2016/01/global-startup-cities-venture-capital/429255/ 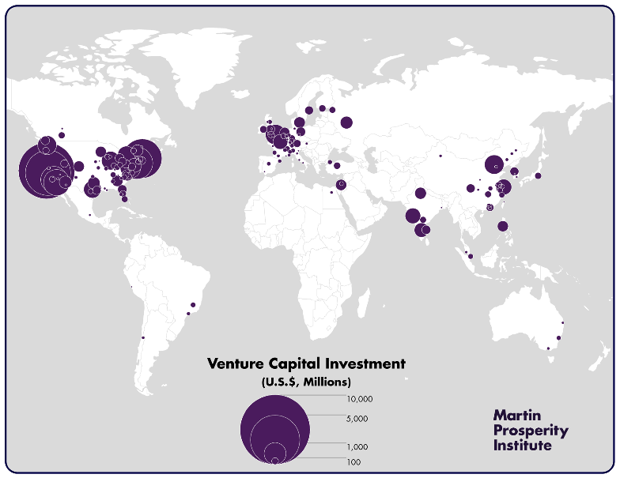 The 2016 table below shows the top 20 global cities by venture capital investment.

Source for table below: https://www.theatlantic.com/technology/archive/2016/01/global-startup-cities-venture-capital/429255/
Venture-Capital Investment by City

It is no accident that much innovation originates in North America, including the shale revolution. Encouraging today’s venture startups is the best way of setting the stage for future innovations.

Tech billionaires such as Elon Musk, Jeff Bezos, Paul Allen, Peter Thiel, Bill Gates, and the founders of Google, are driving innovations in space launch and development, advanced nuclear fission and fusion, artificial intelligence, robotics, and other potentially disruptive innovations. By re-investing their profits from past successes, they push the boundaries of what is possible in the quest for even greater successes.

This doesn’t just happen anywhere in the world, against heavy odds and in such a relatively short time. It happened here, demonstrating that freedom, hard work, innovation, and courage — quintessential American values — are perhaps the most important resources of all.

Perhaps the most disruptive innovation that could be achieved is to optimise each person’s ability to set purposeful goals and to achieve them, starting from a very early age onward throughout their lives. To give each person rational and productive purpose. Few high-profile billionaires have expressed a serious interest in pursuing such human innovations.

The closest I have seen to that is Jordan Peterson’s self-authoring and self-testing products, along with the ideas sketched out in his 12 Rules for Life. Peterson has also expressed an interest in creating an online system of learning based upon principles of genuine education and growth — as opposed to the current university systems that are built upon indoctrination and brainwashing.

Jordan Peterson is not a billionaire, of course. He is only a clinical psychologist, research scientist, professor, author, public speaker, corporate consultant, software developer, and family man. Imagine, though, if he could obtain the backing of an actual billionaire to pursue the goal of building a positive system of education and purpose-building.

Most Billionaires Would Rather Build Intelligent Robots

No matter. It will only take a relatively small investment to create a groundswell of purposeful individuals willing to break away from the mainstream in the pursuit of a more expansive and abundant human future.

Hope for the best. Prepare for the worst. It is never too late for a Dangerous Childhood © .