Student loan debt has grown to overwhelm all other categories of non-housing consumer debt in this nation. __ Source

The general public is slowly becoming aware that colleges and universities are destroying young lives. Corrupt university officials are raking in high salaries while providing youth and young adults with mostly worthless degrees, and putting them into perpetual debt slavery. What should be done?

If the quality of a college education cannot be improved, we should concentrate on encouraging at least half of those who now go to college not to go, adjusting requirements for jobs and professional schools accordingly, and make provisions for an orderly shutdown or shrinking of most of our colleges and universities.

Check out this list of college presidents making seven figure (and high six figure) salaries. Consider how many lives of youth are being destroyed via debt slavery and a disgusting academic indoctrination that leaves young people without useful skills and virtually lobotomised. Meanwhile, administrative salaries and staff sizes are ballooning to outrageous and inexcusable levels.

What Do Americans Think About the Academic Value of Higher Ed Today?

The more that concerned citizens learn about the situation, the less they like it. 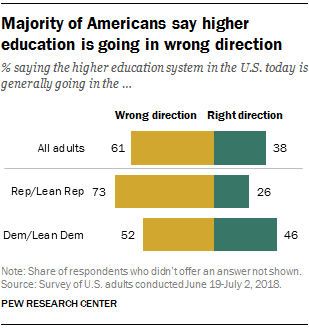 A solid majority of all adults (61 percent) believe that higher education is headed in the wrong direction, according to a survey by the Pew Research Center.

… When Pew analyzed why those who believe higher education is headed in the wrong direction hold that view, the answers were different (generally) for Democrats and Republicans. For both groups, concerns were evident about tuition and about whether students are being trained with the skills they need for the workplace, with Democrats more concerned about the former and Republicans about the latter. __ https://www.insidehighered.com/news/2018/07/27/survey-most-americans-think-higher-ed-headed-wrong-direction 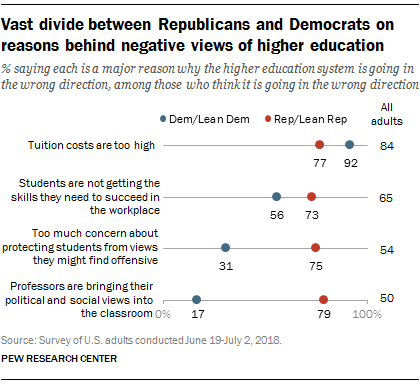 Student loan debt has passed $1.5 trillion and is easily outpacing most other forms of consumer debt.

… While the amount of money spent on American education is obviously too high, concentrating on cutting costs seems questionable when the product is of such minimal value for so many students. For instance, what is the point of having professors teach a larger number of courses from which students learn little or nothing? Even if the average price for a public college education could be cut by a third, $50,000 is still far too much to pay for students not to learn anything. If all students want is to enjoy themselves on a break from studying and working, and the rest of us for some reason consider this desirable, they should be able to enjoy themselves for much less money, perhaps for a year at a pleasant place where they can live in comfortable dormitories and party, sunbathe, or ski with no classes to feel guilty about skipping.

If the quality of a college education cannot be improved, we should concentrate on encouraging at least half of those who now go to college not to go, adjusting requirements for jobs and professional schools accordingly, and make provisions for an orderly shutdown or shrinking of most of our colleges and universities. __ https://www.mindingthecampus.org/2018/07/26/the-sad-state-of-higher-education/

Higher Education: The cesspit that is becoming a graveyard

College Campuses are Propaganda Machines for the Left, According to this Professor

Purging universities of free speech advocates in the faculty

As a wise man said: Burn them to the ground! Figuratively speaking, of course.

Or otherwise put them out of our misery.

Note: Higher ed’s destruction of the young comes not only from exorbitantly expensive administrative bloat and ideological fanaticism. The deepest and most damnable rot emanates from the classrooms, where professors actively indoctrinate young minds in failed ideologies — instead of helping students to grow and prosper in their minds and in the world around them. Instead of learning to think for themselves and solve real world problems, they leave college as drone-like hive minds. From all appearances, many of them never grow beyond that stage.

This entry was posted in Education, University and tagged university. Bookmark the permalink.

1 Response to Universities: Destroying Lives for Ideology and Profit