Before Europeans arrived in the Americas, tribal warfare and human torture/sacrifice was widespread. 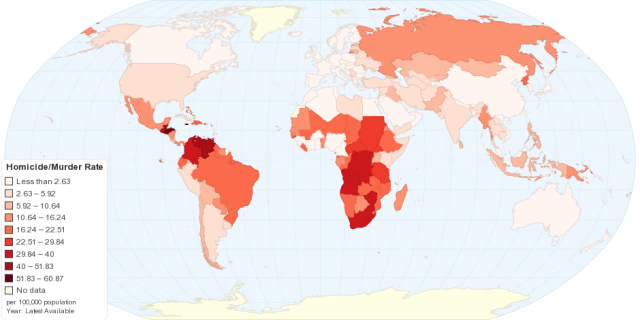 A World of Crime
http://chartsbin.com/view/1454

The high rates of homicide in Latin American nations can seem shocking to observers, until they consider that before Columbus opened the door to Europeans, the Americas were even more murderous and violent.

On a per capita basis the pre-Columbian Americas displayed a greater level of violence than did the bloody 20th century with its European and Asian world wars, genocides, and communist purges.

In ancient Mesoamerica, many cultures practiced sacrifice for various reasons. Evidence has shown of this tradition to have existed in the Maya and Aztec, as well as the Moche civilizations.__ http://incamayanaztec.com/inca-human-sacrifice.html

Human sacrifice has existed throughout human history, but seems to have been quite prevalent among native Americans, Pacific islanders, and Austronesian aboriginals.

One does not see the grand native imperial structures in North American regions that typified Mesoamerican empires. Pre-Columbian native Americans in North America lived in smaller tribal societies and generally cultivated a “warrior culture” in order to protect themselves from raids by neighboring tribes, and to facilitate the tribe’s own raiding on its neighbors. Tribal coalitions of extended clan relations were sometimes called upon as allies if the tribe was threatened by a large outside warring group that threatened to displace the tribe off its tribal lands.

Genocide and ethnic cleansing were particularly common in times of resource scarcity due to extended changes in climate. Mergers of already diminished clans were also likely to take place after any severe pruning of numbers for whatever reason. Below a certain number of warriors and fertile women, a tribe would not be viable.

There are no likely modern native populations that share the genetic makeup of Native Americans of a thousand or ten thousand years ago. Not only the genetic makeup but the cultural or spiritual foundations of the evolving tribes will have changed significantly over the millennia along with tribal names and languages.

PreColumbian America Was a Roiling Mass of Hatred and Vendetta

The Spanish were welcomed by many tribes of Central and South America, because they were seen as potential allies against the hated Aztecs and Incas. Without the aid of these non-imperial tribes, Cortes and Pizarro would not have had the ability to roll up the defending war formations so readily.

The human-sacrificing empires and tribes of pre Columbian America were simply behaving in the same way that preceding native empires had behaved. Similarly, any outside confederation of tribes capable of overthrowing the current empire du jour would naturally fall into the same patterns of behaviour.

It Required European Intervention to Stop the Cycle

Only after Europeans entered the arena with their horses, cannon, and muskets, was this cycle of imperial human sacrifice and genocidal tribal warfare choked off. The widespread disease pandemics suffered by native tribes after contact with old world peoples would have further reduced inter-tribal violence due to reduced numbers of warriors.

The Aims of English Settlers Was Different from Spanish/Portuguese

In North America, settlers wanted to farm and ranch, which required the importation and distribution of large numbers of farming and ranching families — except in parts of the deep south where African slaves were depended upon. In South America, opportunistic Spanish and Portuguese mercenaries were looking to “strike it rich” by using slave labour — both African slaves and native American slaves. Land grants and franchises were given by the royal courts to specific head men, who oversaw the various money-making operations using slave labour. In this way, fewer absolute numbers of Spanish and Portuguese were imported in the early and intermediate stages of colonial settlement, compared to the English in North America.

Today in North America, natives are a small minority of total populations and live peacefully in separate tribal homelands, receiving several types of preferential treatment and monetary tribute from the national headquarters at Ottawa and Washington DC. Special tax treatment, healthcare, legal casinos, mineral rights, direct cash payments, and many other special preferences are afforded to these tribal entities.

In Central and South America, natives are accepted into the mainstream nation — often according to the degree of interbreeding that has taken place. Natives and mestizos tend to form a plurality of populations in most countries of Latin America except Argentina, Costa Rica, and Uruguay.

Violent crime rates are quite high in Latin American nations where mestizos and natives predominate, resembling — and sometimes surpassing — the rates of violence one sees in sub Saharan African nations.

But imagine how violent things would be if Columbus had not come on the scene when he did!

This entry was posted in anthropology and tagged violence. Bookmark the permalink.

5 Responses to Columbus Brought Peace to the Violent Americas