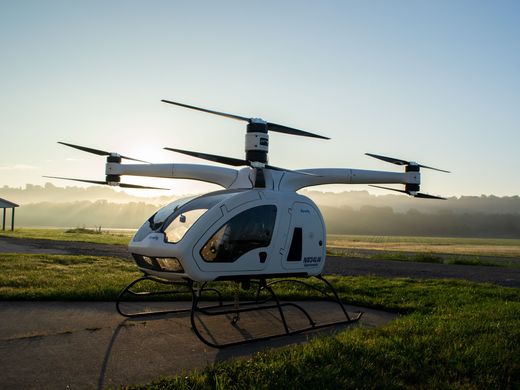 Escaping the City When TSHTF in TEOTWAWKI

The Surefly copter by Workhorse Group Inc. is an 8-propellor hybrid-electric personal VTOL that you can keep at home, in case of emergencies. Safety features include a ballistic parachute, a 5 minute dedicated reserve battery pack in case of main power failure, a dual generator power supply to props, generators powered by gasoline piston engine to allow flexible range (using optional reserve fuel tank).

The SureFly is being designed as unique among helicopters. It would be able to cruise at up to 70 mph for more than two hours using battery power combined with a small engine. It would cost about $200,000, cheaper than many helicopters.

Where it differs most dramatically is in its appearance, looking like an oversized drone rather than a conventional helicopter. SureFly has no tail boom, which makes it about the size of a sedan and compact enough to fit on a residential landing pad. It levitates with eight small rotors mounted on four pods. __ USAT

Will TEOTWAWKI come from a zombie apocalypse? It doesn’t seem likely, but if you read the lock-step puppet news or have followed the mind-drone indoctrination taking place on college campuses, a zombie apocalypse seems more possible.

No matter. Any form of large-scale infrastructure failure would turn most large cities into zombie hives, swarming with violent, brainless automatons. Good luck trying to escape something like that using ground transportation.

Air escape from the zombie horde is a long-time theme for Al Fin blogs. But with the Workhorse Surefly 1, a safe, readily available flying bugout vehicle seems to be almost ready for the consumer market.

Depending upon the winds and weather, flying can be a tricky past-time. But the makers of the Surefly seem to taken steps to make their copter reasonably safe and easy to fly. The limited payload (400 lbs) makes it necessary to carry out a great deal of pre-planning and advanced placement of supplies and family members outside the immediate danger zone, in anticipation of the collapse of order.

Better yet, take steps now to move your main location outside of large cities and suburbs. If you need to maintain a city location for work, with the Surefly you should be able to rejoin your family quickly. Then you can plan your next steps from a safer location, depending upon the nature of the crisis that is likely to evolve.

Zombies and the Dangerous Child

Dangerous Children are the opposite of zombies, and far more lethal. If a Dangerous Child is caught unexpectedly “behind the lines” of a zombie takeover, he may engage in the sport of zombie baiting and killing. But such an activity would needs be subservient to smart exfiltration from the zombie zone. Dangerous Children never sally forth into danger zones without having thoroughly scouted the territory beforehand.

If there is one thing that ordinary people should learn from Dangerous Children, it is this: “Don’t Panic.” Keep thinking, keep moving if possible, pay attention to what is happening around you — and as far out as you can monitor. Never fight when you can run, never run when you can walk, never walk when you can ride, and never ride when you can fly.

Hope for the best, prepare for the worst. It is never too late to have a Dangerous Childhood.