Global Automation Will be a Brave New World Only for Some

Over the next two decades, there is a chance that employing more artificial intelligence and robots will incidentally create twice as many jobs as they take away. But there is a catch: Those who are able to learn, grow, and adapt to new concepts and technologies will be able to do the new jobs — but those who cannot adapt are likely to be left to their own devices.

The new age of artificial intelligence plus robots will provide companies with a tremendous boost in productivity. But as old jobs are lost and new jobs are created, the concept of “employability” may change.

Most immigrants from the third world will be unable to fill the requirements for these new kinds of work — and so the already overloaded welfare state will be expanded for the many newcomers who may have nothing to do but stand on the corner and make mischief. 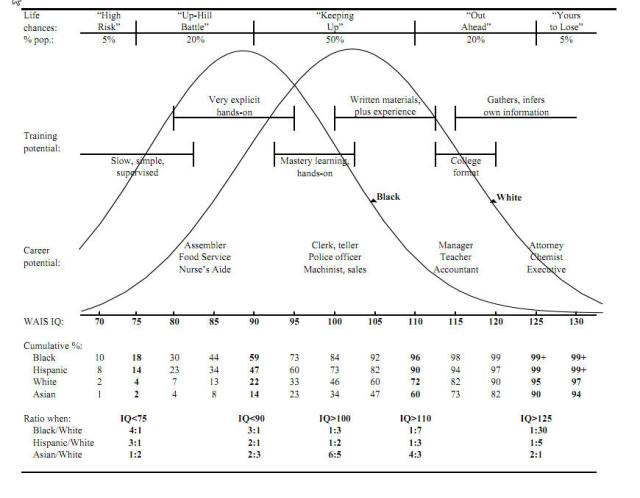 Consider the types of work in the graphic above, which correspond to different levels of IQ required. Remember that most third world immigrants have average IQs below those of the two groups displayed above. Many of the low IQ jobs will disappear in the coming automation age.

Every Sector is Up for Automation

Robots will seed, cultivate, and harvest crops 24 hours a day in light or darkness. Artificial intelligences will diagnose diseases, prepare affidavits, dispense medications, prepare lesson plans and grade exams and essays, drive taxis/trucks/trains, process loan applications, prepare meals in homes and restaurants, operate news and entertainment outlets, and function as aides to legislators and as federal bureaucrats at all levels.

This will not happen overnight. But it is happening already, just out of sight.

A recent study by the Organization for Economic Cooperation and Development said that about 46 percent of jobs have a better-than-even chance of being automated.

…automation of one sort or another has been happening for centuries — machine tools, steam shovels, word processors, street sweepers and plenty of other machines are just forms of automation.

The process of automation — replacing human workers with machines — has been happening since the middle ages and before. Well before that, humans learned to replace human labour with animal labour, for more power and efficiency.

Consider that most kitchens lack the space for all of the work-saving devices that are now available. New clothing types will practically wash and iron themselves. Drone delivery will replace most forms of shopping — they will even deliver hot gourmet meals and fine wines in less than a half hour for most urban and suburban customers.

The constant drive to improve productivity is what powers this age-old movement away from human slave labour to more efficient and productive means for outputting goods and services.

But as the class of unemployables grows in the new age of automation, there will be a new use for home and personal servants … and slaves.

Return of Servants and Slaves

For the winners in this game of thrones, there will be prestige in having a personal chauffeur, masseuse, chef, housekeeper, and so on. But the most demanded personal employee may be the “technology manager.” The economic advantage of technology mastery will cause a rapid bidding up of salaries for those clever technologists who are willing to hire themselves out to that portion of the elites who have no good personal understanding of new technology.

Many attractive young “unemployables” are likely to be kept as pets by the wealthy, for as long as these pets remain attractive. This is already common inside Russia, and is likely to become more common in other nations as societal mores change in the face of a growing “unemployability” problem.

The arts and skilled trades will also be impacted by the coming age of AI/automation. Homes and apartments will be increasingly designed and built by automated processes, probably in a manner that will make it necessary to use proprietary automation to effect preventive maintenance and repairs.

Still, many people will value human architects, builders, and tradesmen. Human artists will acquire wealthy patrons, while the mass market for art will be supplied by specialty AI/robots. Human artists may imitate novel machine art, while machines will imitate novel human art.

The Changing Faces of Crime

As the elites separate physically from the unemployables in almost every way, and as machines perform more of the mundane work — such as bank tellers, liquor store clerks, couriers and delivery personnel — those living in the unemployability zones will have fewer soft targets for crime. Drug dealing will be common, and those who accumulate excess wealth from illicit activities will attempt to seize power over apartment blocks and towers that house the unemployables. Turf wars will be common… unless the machines anticipate this problem, and take on the role of drug dealer/distributor (and pimps) themselves. In this way the machines can dole out power and privilege to the more competent and perhaps less brutal, preventing all out warfare on the streets.

All of this Will Sneak Up on Societies

It may take a hundred years for most of these changes to affect the population. Perhaps that will be plenty of time for open-eyed and competent people to create their own zones of parallel infrastructure and technology development. It should go without saying that the higher the average competence of a population, the easier it can be to adjust to fundamental changes in economies and workforces.

There Will be Wild Humans Spread Over the World and Sky

For those humans of competence who do not wish to join a collective or serve the elites, many survival niches are likely to open up, as novel uses for the new technologies (and the old technologies) are discovered. If humans learn to prosper and multiply in harsh environments — such as outer space, the open ocean and underseas, and at the poles — then many new genetic strains of human will develop alongside new technologies and new approaches to being human.

For these things to take place, humans need to already be in the R&D phase to prove out as many of the conceptual underpinnings for these ways of life as possible.

Remember how rapidly humans developed as various memes were discovered and made available: 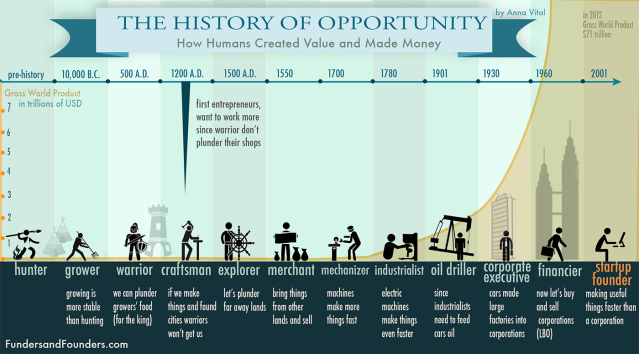 The future is likely to display equally rapid transitions, if not more rapid.

It would be best to consider how ongoing developments might affect your own family and community.

It is never too late to have a Dangerous Childhood © .

5 Responses to Human Slavery and the Coming Automation Age