Famine and pestilence go hand in hand, and the threat of famine can trigger war. Death on a large scale usually follows.

Ever since the “Little Ice Age,” the Earth has experienced a warming trend, with generally longer growing seasons. This has helped to grow a human population of over 7 billion people. And still there are large food surpluses around the world — and large swathes of arable land go untilled due to lack of need.

But such things could easily change if the climate should happen to cool for an extended time.

There is no way for seven billion people to live on a quickly cooling planet—hundreds of millions will probably perish starting in populations of grain importing nations first. Global cooling will kick us where it hurts the most, in our stomachs, which will be deprived of foods because of shorter growing seasons. With global warming we had a chance of increasing agriculture growing zones pushing further and further north but with cooling its going to be a massacre. Humans will die in mass and populations will be reduced as elite desire. __ https://coldclimatechange.com/starvation-comes-with-shorter-growing-seasons/

Globally cooling conditions would lead to shorter growing seasons, less food production, and a high likelihood of famine for the food importing nations with less income to bid up prices for relatively scarce food supplies. After famine, comes pestilence, war, and death.

As the sun goes through its variable cycles, the planets of the solar system are exposed to a variable quantity of energy. For planets like Earth and Mars, the consequent warming and cooling can be seen by viewing the ice around the poles.

Closer in to planet Earth, ground pounders must live with warming and cooling cycles — and the resulting longer and shorter growing seasons. If humans procreate to a maximum during warming trends, they are apt to starve significantly during cooling trends.

Humans have experienced the ups and downs of solar variability for hundreds of thousands of years. They have thrived and they have starved, but their numbers were always much lower than in modern times.

Something was different this time around: Technology. Technology allowed more advanced societies to develop better sanitation, vaccines, advanced medicines, better food growing technologies, and better transportation for all of those things for providing them to less advanced societies — who would have suffered much higher death rates and lower birth rates otherwise. 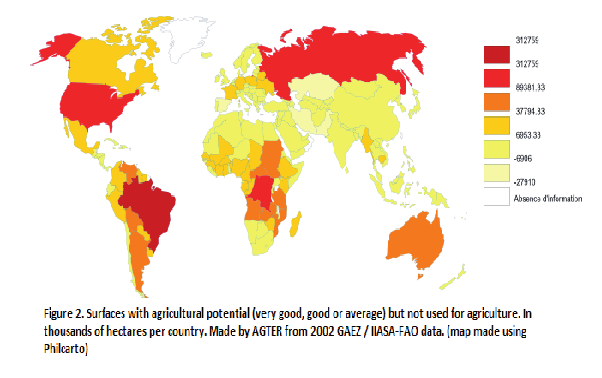 Arable Land Not Being Used
http://www.agter.org/bdf/en/corpus_chemin/fiche-chemin-231.html

Global Dysgenics Would Play a Part

Malthusian doomerism assumes that humans are stupid and uncreative. The past two hundred years have proven Malthus wrong on that score. 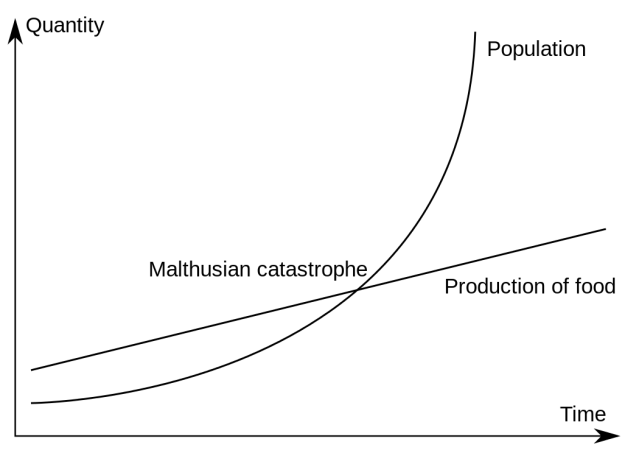 But suppose humans do become more stupid than they are, and lose that special ingenuity and resourcefulness that has helped them to thrive these past few hundred years? How would Malthus score in such an event?

It depends upon how stupid humans become, overall, and how many smart people remain who are capable of influencing the human condition. Many nations have had very low average IQ populations, but have still thrived because of a small “smart fraction” of people with high IQs and creative, bold minds.

We saw how when Uganda ejected its “smart fraction,” it descended into poverty and barbarism. Zimbabwe is similarly well down the slippery slope from having made that fateful choice. And what is to become of South Africa, which is following closely along the Zimbabwean path to a socialist paradise? How much of Venezuela’s bloody descent has to do with the loss of its “smart fraction” during the Chavista revolution?

This is not a rhetorical question to pose to the advanced world, given current immigration patterns into a Europe that has already been weakened by in-fighting, and by dirty pool played by the Germans and Swedes.

How long until the new, less orderly, less productive Europeans shift the population balance into a dysgenic dystopia? But that is the wrong question. In today’s western world, a small minority that claims victim status can bend the will of governmental agencies into pretzel shapes. Consider the smallness of “trans-sexual” populations, and how thoroughly they have muddled the minds of the governments of North America, and half their populations.

No, it only takes a relatively small number of “victims” to twist an ideologically bent population and its government into a self destructive crash and burn. In the context of a disastrous global climate cooling and impending food shortages, the takeover of the dysgenic dystopians — the grand Idiocracy (eg Ocasio-Cortez) — would serve as an ample detonator for the bomb.

The dysgenic trend is fairly well built into current political conditions and ideological temperaments of most nations of Europe and the Anglosphere. Hardship for many regions is likely to follow. But one should hope that we do not see an extended period of hard solar minimums, nor any cooling Milankovich orbital conditions of any significance.

Sooner or later, it will happen. But the current breed of human is unprepared for such a concurrence. And it is becoming less and less prepared every day.

Hope for the best. Prepare for the worst. What is that word for what you should be making yourselves? Oh, yes. Dangerous. Very Dangerous.

This entry was posted in Agriculture, Climate, Doom, food and tagged Climate. Bookmark the permalink.
%d bloggers like this: