Women Not Dying on the Job Quickly Enough? A Question of Gender Parity

The Bureau of Labor Statistics shows that, in 2015, men dominated the 20 most dangerous occupations in the United States. Logging is the most dangerous job in the U.S., followed by fishing. Mining is the 20th most dangerous profession. More men than women occupied these jobs by anywhere from 85.4 to 99.9 percent. __ WashingtionExaminer 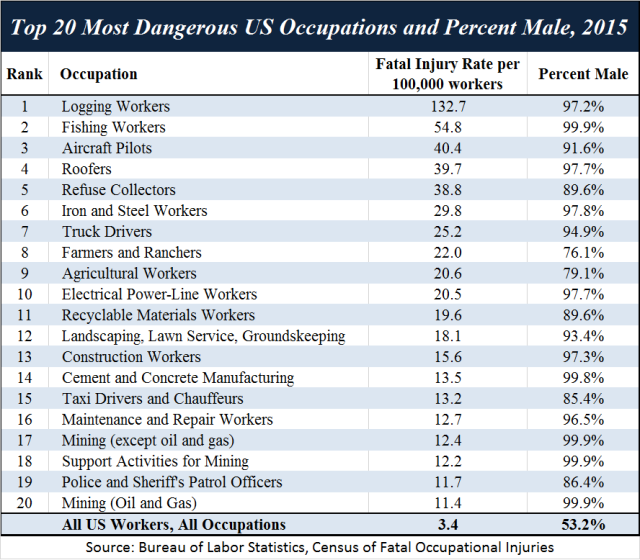 Job Deaths via BLS
via JBP

Gender Labour Parity is About More than Salary

Men dominate the dangerous jobs, because they are willing to take the risks for the pay. Modern western women are typically averse to physical risk on the job — and besides, the pay for most of these jobs is not especially high, for the average person in the particular occupation. But if a man develops his skills — and is willing to put in overtime — he can earn enough to support a small family comfortably.

Several occupations in and around the oil & gas industry can earn a person in excess of $100,000 a year — and no need for a college diploma. During boom years for oil & gas, the salary boom tends to cascade outward from the oil fields to boost the pay for many other occupations, many of them quite mundane and perfectly safe. The same salary-boosting effect is seen in the vicinity of large construction jobs — especially around multiple construction jobs.

Why the Job Choice Differences Between Men and Women?

Even when men and women are most different —in those cultures where they differ most, and along those trait dimensions where they differ most — they are more similar than different. However, the differences that do exist are large enough so that they play an importance role in determining or at least affecting important life outcomes, such as occupational choice. Here’s a paper, for example, indicating that more gender-equal countries produce comparatively fewer women in the STEM fields. Here’s another, showing that at least some of the much-vaunted gender gap in pay, which is caused by many factors, can be attributed to male/female personality differences and not to simple discrimination.

Where are the largest differences? Men are less agreeable (more competitive, harsher, tough-minded, skeptical, unsympathetic, critically-minded, independent, stubborn). This is in keeping with their proclivity, also documented cross-culturally, to manifest higher rates of violence and antisocial or criminal behavior, such that incarceration rates for men vs women approximate 15:1. Women are higher in negative emotion, or neuroticism. They experience more anxiety, emotional pain, frustration, grief, self-conscious doubt and disappointment (something in keeping with their proclivity to experience depression at twice the rate of men). These differences appear to emerge at puberty. Perhaps it’s a consequence of women’s smaller size, and the danger that poses in conflict. Perhaps it’s a consequence of their sexual vulnerability. Perhaps (and this is the explanation I favor) it’s because women have always taken primary care of infants, who are exceptionally vulnerable, and must therefore suffer from hyper-vigilance to threat.

There are other sex differences, as well, but they aren’t as large, excepting that of the aforementioned interest: men are comparatively more interested in things and women in people. This is the largest psychological difference between men and women yet identified. And these differences drive occupational choice, particularly at the extremes. __ JBP

It is not the dangerous jobs that boost the average pay for men, necessarily. It is the top executive & business jobs, the top tech jobs/careers, the fastest track/high pressure law careers, the high-achieving engineers, and the most intense medical/surgical categories tend to be dominated by men — because many men tend to be willing to work the 60 to 80 hour a week jobs that women quickly grow tired of, the jobs that women tend to quit in their mid to late 30s if they want any chance of a family.

Feminists Use Women as Cannon Fodder in Pursuit of Personal Power

Radical power feminists do not care what young women want to do with their lives. They only want to seize upon areas of “disparity” to acquire powerful contracts and positions for themselves and their associates. But here is the simple truth:

Men and women are similar. But they are importantly different. The differences matter, particularly at the extremes, particularly with regard to occupational choice and its concomitants. There are going to be more male criminals, and more male engineers, and more females with diagnoses of depression and anxiety, and more female nurses. And there are going to be differences in economic outcome associated with this variance. __ JBP

Occupational disparities arise naturally via personal choice. Men are more likely to choose jobs that are more dangerous and jobs that are more demanding in other ways. Women tend to be risk-averse, and to be more interested in people and less interested in “things” such as machines and complex technical systems. Also, women tend to want to have a family while there is still time — before the age of 40 if possible. Many of the high paying careers do not allow a woman time to play a meaningful role in a family.

So what should be done with the feminists in academia, journalism, government, foundations, activism, and other parasitic sectors who are determined to destroy the foundations of the planet’s most successful societies, based upon phantasmigorical and meaningless disparities? That may be one of the greatest challenges of the day.

Hope for the best, prepare for the worst. It is never too late to have a Dangerous Childhood © .

This entry was posted in careers, Demographics and tagged career. Bookmark the permalink.

4 Responses to Women Not Dying on the Job Quickly Enough? A Question of Gender Parity