New Oil Discovery? Get in Line

Since 2016, Exxon has made a dozen discoveries in Guyana that now total more than 5 billion barrels of recoverable reserves. This is enormous — for perspective, the industry calls a 1-billion-barrel field a “supergiant.”

Exxon plans to begin producing 120,000 barrels per day next year, and to bump that up six times to 750,000 by 2025.
At $60 a barrel, and a roughly 50-50 split of profits with Exxon, Guyana could receive a bonanza of more than $5 billion a year in revenue.
Given how fast energy is changing and an industry wide push to pull as much oil out of the ground as possible as fast as possible, experts think the company is likely to push production to 1 million barrels per day. __ https://www.axios.com/newsletters/axios-future-ee8f93da-35f6-46d5-99fd-9e8d08e364cb.html?chunk=0&utm_term=fbsocialshare 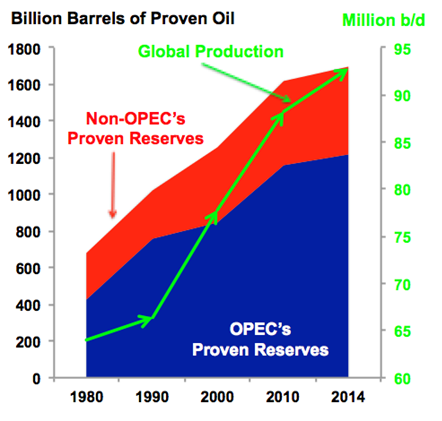 The recent mappings of the huge multi-layered Texas/New Mexico Permian Basin fields revealed oil basins which will continue to add significant quantities of oil to “proved reserves” as oil prices rise — and as the technology to extract all types of oil deposits more economically, improves.

Large undersea deposits of oil are being left undeveloped from South America to Africa to Southeast Asia to the Arctic to North America as oil companies wait for oil prices to rise high enough to justify development. This should tell us that even when US shale oil production begins to plateau — in 20 to 40 years — there are plenty of other more expensive oil deposits waiting in line to take up slack. And if the new discoveries off South Africa and Guyana are any indication, the line of oil discoveries is likely to get ever longer.

We have seen predictions for peak oil demand from a wide range of analysts, due to take place anytime within the next 10 years to 50 years. “Peak Oil Demand” is designated as the time after which demand for oil will decline, perhaps rapidly.

Analysts at the Al Fin Institutes do not expect to see Peak Oil Demand until humans develop advanced new forms of nuclear power, in combination with electrical storage technologies far superior to what is currently on the market — or in the pipeline. If Elon Musk really wanted to divert human development away from fossil fuels, he would have promoted advanced nuclear energy before burning all that money on inferior electric battery technology and inferior electric vehicle production.

Liquid hydrocarbon fuels can be produced from more than just crude oil. Liquid fuels can be made from natural gas, coal, plastic waste, and virtually any other carbonaceous material — with the right processes and catalysts. All of these things would be quite economical if only the price of oil would rise. But that will only happen when oil producers stop discovering new oil and stop developing more economical ways of getting at oil that is already discovered.

During the Peak Oil fad of the late 1990s and early 2000s, doomers fantasised over the collapse of civilisation due to the exhaustion of world fuel supplies. But global reality did not work out to the satisfaction and titillation of the doomers’ expectations. That is because doomers are either unwilling or incapable of looking for solutions to the genuine problems that are posed.

Problem-solvers tend to be a different breed, and are more likely to achieve economic success through solving problems — instead of by selling doomer books and doomer newsletters.

When that happens, fossil fuels will stay in the ground — indeed they will begin to build in quantity again in underground reservoirs. Hopefully humans will never fall back to the primitive levels that force them to utilise those huge reservoirs again.

8 Responses to New Oil Discovery? Get in Line