Engineers are getting better at printing complex metal objects using 3D printing. Building rocket engines for space launch has to be one of the more complex applications of the technology.

SpaceX launched its first 3D-printed part, the body of a main oxidizer valve, back in 2014, for example. And Blue Origin is incorporating 3D-printed components into its powerful BE-4 engine.

But one of the organizations with the most experience flying 3D-printed parts is Rocket Lab, based in New Zealand and the US. Founded by engineer Peter Beck in 2006, Rocket Lab is now leading the pack among small-satellite launch companies, thanks to its Electron rocket. Six of the rockets have launched successfully so far—each equipped with nine Rutherford engines that are created primarily using metal 3D printing, as are a number of other elements on board.

… the Rutherford rocket engine is, to our knowledge at least, the highest-performing liquid oxygen–kerosene engine in America, with slightly hotter performance than the [SpaceX] Merlin 1D. And that is in part due to 3D printing. We 3D-print all of our injectors, and we’re able to 3D-print geometry within the injector that allows for superior mixing and superior performance that you couldn’t do with other manufacturing processes. It’s really hard to get a small engine really highly efficient. __ MIT Technology Review via AT

Another unconventional approach to achieving space launch is the “Spinlaunch” centrifugal booster approach. The California company recently got a launch contract with a branch of the US DOD. They plan to begin offering commercial launch services for small satellites in 2022.

The world’s largest airplane and flying spacelaunch platform, Stratolaunch, is being offered for sale for $400 million. It was a dream of the late Microsoft co-founder and billionaire Paul Allen. As billionaires die, so also sometimes do their dreams die with them. But the principle of the Stratolaunch — the flying spacelaunch platform capable of launching into any conceivable Earth orbit — will still live.

The SpaceX Falcon Heavy rocket booster is scheduled to launch a large payload for the US Air Force on 24 June 2019, in 2 days. The photo below shows what the 24 satellites look like when loaded as payload. 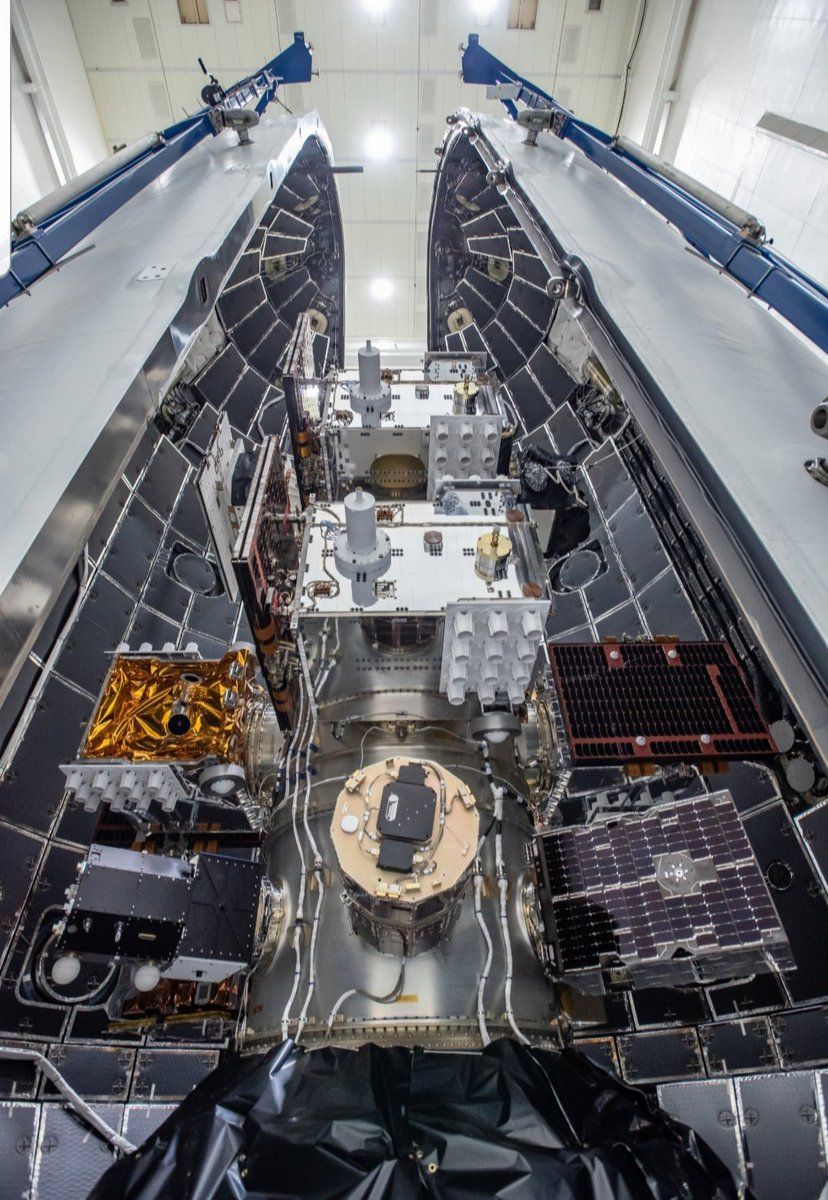 More than 370 FAA-licensed space activities have occurred since the first commercial launch in 1989, and no one in the public has ever been injured. We believe it is possible to maintain that safety record while enabling innovation.

This administration, with the leadership of Transportation Secretary Chao, wants to make sure regulatory requirements don’t keep rockets tied to the launch pad. We’re jettisoning rules that have outlived their usefulness, are duplicative, or are unnecessarily burdensome. We’re cutting two regulations for every one we create.__ https://spacenews.com/op-ed-commercial-space-activities-offer-boundless-opportunities/

SpaceX, Rocket Lab, and other private space companies are pushing launch technologies to their limits. In an investment climate where risk-comfortable investors are looking for high yield investments, they would do well to look to visionary inventors, engineers, and entrepreneurs. That is far more rational than investing in nations which are targeting their homes with nuclear warheads.

Industries from space tourism to asteroid mining to routine re-supply of permanent lunar outposts and Mars colonies — all of these will lead to dozens of high value commercial niches which cannot be imagined today. It is our inability to foresee what we will discover when we walk through the door, which should encourage us to be bold while cautious. We cannot afford to be paralysed or overly reticent.