Some Groups are Over-Represented in Higher Education 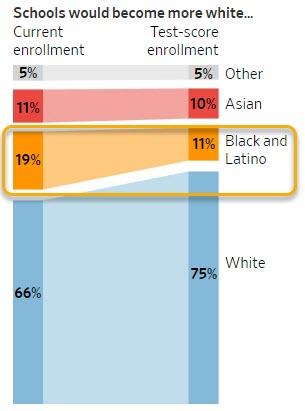 Identity politics is making a mockery out of higher education. Many are admitted to elite colleges who cannot be taught, and others who should be admitted are being discriminated against because of their sex and race. In any rational world this wasteful approach to “education” would be considered an outrage.

“The SAT was the last bastion of objective measurement in the sea of subjectivity that makes up a college application. It is profoundly disappointing to see that the SAT is now subject to the same identity politics bias that everything else is in college admissions. The SAT and the ACT were the best predictors of college preparedness…

… Paradoxically, younger Americans are entering college at a higher rate – 70 percent – than the boomer generation managed. In 1970, only 48.4 percent of high school graduates went on to higher education, according to a study published in 2010 in the American Journal of Applied Economics. But that edge is negated, because fewer than half of today’s students manage to stay in school and earn degrees, a slightly lower completion rate than boomers…

If you debase the results, you will get one or all of the following: higher dropout rates; debased teaching standards, resentment and distrust among students.”
__ https://www.wsj.com/articles/what-if-colleges-used-only-test-scores-to-fill-campuses-11561282201? via ZH

Colleges are admitting too many future dropouts, and not enough of the gifted students who could actually benefit from a higher education.

How do we look our kids in the eyes, urge them to work their hardest, study endlessly, never stop trying because that’s what counts in America… and then apologize for reducing their chance of making it to their dream school by daring to live in a low-crime, low-poverty, high-cost, two-parent home. __ ZH

Helping less capable youth to reach their potential would be good policy. But placing them in situations where they are almost certain to fail is not an act of compassion. It is an act of hypocritical virtue signaling, and an act of callous cruelty at the same time.

Once a critical mass of lower qualified minority students is enrolled in a department — and the number doesn’t have to be that high — an unspoken pressure exists on the professors in that department not to let them flunk out. Over time, this leads to lower standards — for everyone. __ AT

The foolish and cruel policy of “dumbing down the departments” is even more destructive than allowing failed students to drop out with large student loan debt. In a dumbed down university propelled by unearned social promotion, all of society plus the world at large loses.

According to education researchers at Georgetown University, judging by academic merit [SAT Scores] alone a lot more males of European descent would be admitted to the most elite US schools. With better students, the universities would turn out better graduates. With better graduates, society and the world would benefit from a more rational future.

… the percentage of blacks and Hispanics would fall sharply from 19 percent to 11 percent. The whites student population would rise from 66 percent to 77 percent. And surprisingly, Asian students would fall from 11 percent to 10 percent. The study goes on to say that many of the whites in these select college would lose their seats to other better qualified white students.

In other words, the student mix would change noticeably. __ AT

Affirmative Action and Title IX have helped to make a mockery of the concept of “higher education.” Higher indoctrination and higher social engineering are more to the point of what makes modern universities tick. Which is not only a huge waste of society’s resources, but also goes a long way to wreck much of the nation’s financial system through massive student loan obligations into the $trillions.

Student Loan Debt Is the Worst!

Radical rearrangements of university admissions, educational standards, and financial policies are all overdue. And that is only for a bare beginning. After that we will have to take a much closer look at what can be done to make better use of promising young minds.

Note: Grade inflation and cheating by both students and teachers/administrators is common in many high schools. SAT scores are crucial as a quasi-objective rating method for a diverse body of applicants. Higher education has become corrupt in accepting bribes and looking the other way when other financial inducements are used to affect admissions. When combined with corruption from affirmative action and Title IX, the bribery corruption scandal makes universities look almost criminal. Top it off with the student loan fiasco, and one wonders why society tolerates the bunch of swindlers and fanatical ideological indoctrinators.

More data and graphic materials on this story from Georgetown University

This entry was posted in Education, University and tagged Education. Bookmark the permalink.

2 Responses to Dirty Little Secret Revealed by US SAT Scores