More Than All the Money In the World 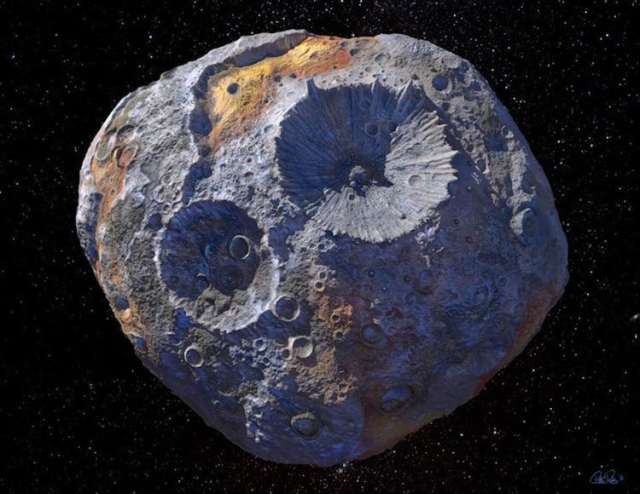 16 Psyche is a massive asteroid that is particularly interesting due to its metallic composition, which has caused some people to speculate about its potential value.
https://mymodernmet.com/16-psyche-asteroid-nasa/

The Danger is Real

Asteroids represent both threat and promise. A large enough asteroid could destroy human civilisation. But it could also represent unimaginable wealth in base metals, diamonds, platinum, and gold. Much rests upon whether humans can prepare themselves to apprehend and process large rocks in space.

Three asteroids whizzed by Earth last week, with Armageddon averted only by a few hundred thousand miles. While they didn’t actually pose much danger, the cosmic near-misses may have been an opportunity for massive profit, according to NASA. As space travel becomes more technically feasible, mining operations among the stars could soon become a wildly lucrative industry. __ More Than $Trillions

The valuations in $quintillions above are just estimates for a few of the belt asteroids. Some earth orbit-crossing asteroids are thought to be worth far more:

It is estimated that the 16 Psyche consists of $700 quintillion worth of iron, nickel and other valuable metals. This is way more than the total amount of money in the world, including physical and virtual assets. __ https://www.rankred.com/mining-asteroids-using-bacteria/

The space mining industry will take a while to get going. Already there has been a significant shakeup among the early players in the game. Both Planetary Resources and Deep Space Industries have been bought by other companies, with some changes in their goals away from just mining asteroids.

Planetary Resources was acquired last year by ConsenSys, a blockchain software company based in Brooklyn that develops decentralized platforms for signing documents, selling electricity, and managing real estate transactions, among other things.

… DSI, in turn, was acquired by an aeronautics company named Bradford Space.

… Bonin says many of his DSI colleagues quickly found work elsewhere. And engineers laid off from PR have banded together to start a company called First Mode, which builds hardware that can operate in harsh environments both on Earth and above it; the company, according to its founders, is already profitable.

So the asteroid-mining industry may have collapsed for now, but its players are still hard at work. __ Asteroid Mining Has Its Ups and Downs

Still, further investments in the high frontier are being made far and wide — because the potential for profits is so great, and because the risks of failing to be able to properly deal with errant asteroids are so serious.

North America is expected to be the dominant market for space mining in the years to come. Currently, the United States is investing huge amounts in the space mining industry. NASA’s OSIRIS-REx traveled to a near-Earth asteroid called Bennu and may bring a small sample back to Earth for study. The mission was launched in September 2016. After traveling through space for more than 2 years, NASA’s OSIRIS-REx spacecraft arrived in December 2018 at its destination, asteroid Bennu. As planned, the spacecraft is expected to return a sample to Earth in 2023. __ http://finance.dailyherald.com/dailyherald/news/read?GUID=38632698

Most people seem to think that the big payoff from asteroid mining will come from selling the metals and gems on Earth markets. But that is not where the big money will be made. Almost all of the mined asteroid mass will be utilised in space, rather than back on Earth.

C-type asteroids have a high abundance of water which is not currently of use for mining but could be used in an exploration effort beyond the asteroid. Mission costs could be reduced by using the available water from the asteroid. C-type asteroids also have a lot of organic carbon, phosphorus, and other key ingredients for fertilizer which could be used to grow food.[24]
S-type asteroids carry little water but look more attractive because they contain numerous metals including: nickel, cobalt and more valuable metals such as gold, platinum and rhodium. A small 10-meter S-type asteroid contains about 650,000 kg (1,433,000 lb) of metal with 50 kg (110 lb) in the form of rare metals like platinum and gold.[24]
M-type asteroids are rare but contain up to 10 times more metal than S-types[24] __ https://en.wikipedia.org/wiki/Asteroid_mining

Space based infrastructures would be too expensive if all the materials had to be hauled up from Earth. But shipping large quantities of asteroid mass to Earth would be nonsensical and dangerous. Best to minimise the likelihood of accidental Earth bombardment, and keep the mass in space.

The costs involving an asteroid-mining venture have been estimated to be around US$100 billion in 1996.[73]

There are six categories of cost considered for an asteroid mining venture:[73]

…. Decreases in the price of space access matter. The start of operational use of the low-cost-per-kilogram-in-orbit Falcon Heavy launch vehicle in 2018 is projected by astronomer Martin Elvis to have increased the extent of economically-minable near-Earth asteroids from hundreds to thousands. With the increased availability of several kilometers per second of delta-v that Falcon Heavy provides, it increases the number of NEAs accessible from 3 percent to around 45 percent.[76]

And so we begin to see the importance of lowering the cost of space launches. As SpaceX and others continue to reduce the cost-per-launch for a wide array of space missions, the viability of many new space enterprises improves. Space mining is just another term for being resourceful in space, and making good use of what is available.

An expansive and abundant human future depends upon humans being able to deal with both opportunities and threats. If we base our actions on vague fears and dark fantasies, there will be no future.

This entry was posted in Asteroids, Space Future and tagged Space. Bookmark the permalink.

7 Responses to More Than All the Money In the World