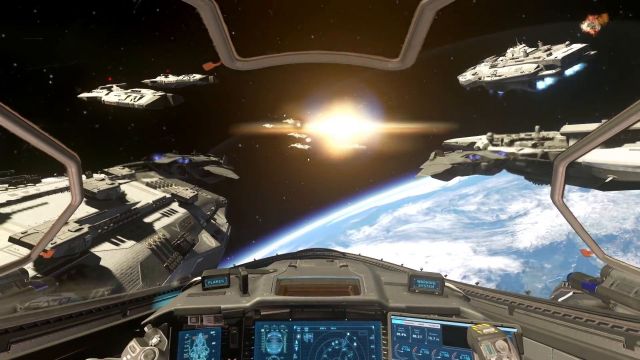 The US Air Force has been exploring multiple uses of outer space for decades. The latest flight of the secretive USAF X37B space plane came to an end recently after a record 780 days in orbit.

Air Force officials have said that the exact nature of X-37B missions are classified, though they have dropped hints about the types of experiments OTV-5 performed in orbit. One payload was the Air Force Research Laboratory Advanced Structurally Embedded Thermal Spreader, an experiment designed to “test experimental electronics and oscillating heat pipe technologies in the long-duration space environment,” according to an Air Force statement.

These space flights seem aimed at developing a larger understanding of the space environment, keeping a wide range of possible scenarios in mind.

A war in space would be a nightmare. Such an engagement could lead to particularly lethal engagements, including space-based EMP attacks on military and civilian targets and the bombardment of Earth cities using space materials — including asteroids. But given what is known about Chinese space weapons and intentions, that bird has long since flown the coop.

Effective “Space Force” military operations could benefit from lessons learned by the US military on the ground and in the air. The “Kill Chain,” or — FIND-FIX-TRACK-TARGET-ENGAGE-ASSESS — is meant to link all levels of operations that might be involved in space operations.

The fusing of sensors, shooters, and C2 [Command & Control] across the special operations and space operations communities during Operation Enduring Freedom proved transformational in redefining how precise precision engagement could be and began an era of increasing dependence on space by the Department of Defense. The benefits of using the kill chain model in the air domain translate through a similar integrative approach for space. The different steps of the F2T2EA process provide a roadmap for achieving a space warfighter mindset and the foundation of a more lethal space force. As technological capabilities continue to advance to increase lethality and accuracy, the relationships and processes that guide those capabilities should keep pace with the threat. __ https://warontherocks.com/2019/10/the-kill-chain-in-space-developing-a-warfighting-mindset/

It is inevitable that the US Space Force would utilise a large number of unmanned autonomous and remotely piloted space craft and aircraft against any opponent engaged in a space war against the US. Drones are cheaper than manned craft, and are already being incorporated into advanced air war strategies:

A combat drone could become a force multiplier for manned aircraft. A F-35A, F-22 Raptor, or even B-21 Raider bomber could someday control several unmanned escorts, each with a different mission and equipment set. Drones accompanying fighters could search for manned enemy warplanes, then act as bait for an aerial ambush or engage the enemy with missiles. Drones accompanying bombers could map out the enemy’s air defense grid, jam enemy communications and radars, and seek out and destroy enemy radars and surface to air missile sites– improving the bomber’s chances of escaping detection. Finally, a drone could act as a decoy for any manned plane, sacrificing itself. __ Popular Mechanics

The concept of the swarm offers a wide range of strategy and tactics — including a dynamic strategy of attack or defence that can change almost instantly depending upon the developing situation.

The U.S. military can set itself apart from others by embracing autonomous drone warfare through swarming — attacking an enemy from multiple directions through dispersed and pulsing attacks. There is already work being done in this area: The U.S. military tested its own drone swarm in 2017, and the UK announced this week it would fund research into drone swarms that could potentially overwhelm enemy air defenses.

I propose we look to the amoeba, a single-celled organism, as a model for autonomous drones in swarm warfare. If we were to use the amoeba as this model, then we could mimic how the organism propels itself by changing the structure of its body with the purpose of swarming and destroying an enemy. __ https://nationalinterest.org/blog/buzz/amoeba-warfare-how-us-military-could-use-drone-swarms-next-war-45057

The outer space environment offers levels of maneuverability and targeting that are different from those used on the ground, on and beneath the waves, and in the air. We can be certain that swarm tactics will play an increasing role in future warfare, whether terrestrial or extraterrestrial.

Whatever We May Wish, War is Coming

War is always coming, and only fools doubt that. We certainly wish otherwise. Nevertheless, wise men make provisions for likely times of trouble — when there is no perfect outcome other than perhaps to avoid total destruction.

A war that escalates to the level of space war risks setting back the chances for an abundant and expansive future by many decades or longer. Yet when we look at the suicidal policies of many European and Anglospheric nations, it is clear that the damage that several advanced nations are doing to themselves can ultimately reach the level of damage that one would expect from a large-scale war.

In other words, intelligent persons of broad and deep perspective will prepare for either avenue to catastrophe, and more. Hope for the best, prepare for the worst. It is never too late to have a Dangerous Childhood © .

This entry was posted in Military, Space Future, Uncategorized and tagged Space. Bookmark the permalink.