Compared to other forms of generating electric power, nuclear fission is safe, reliable, and clean. But for many reasons it costs a lot more to build new fission power plants than competing forms of power generation such as gas turbines and coal power. 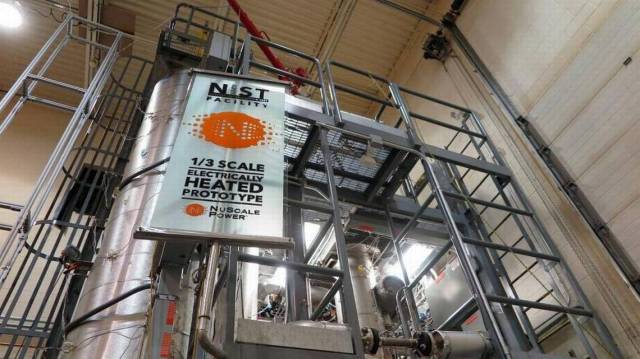 A one-third-scale model of NuScale Power’s 50-megawatt reactor is perched in a birdcage of steel girders in a nuclear test facility at Oregon State University. NuScale has offices in Richland, and its design for small modular reactors has received approval by the U.S. Nuclear Regulatory Commission. Keith Schneider TNS
Read more here: https://www.tri-cityherald.com/opinion/opn-columns-blogs/article237370389.html
https://www.tri-cityherald.com/opinion/opn-columns-blogs/article237370389.html

Nuclear fission has a bright future in the US if the industry can find a way to control the costs of building new nuclear power plants. One of many promising new approaches to reducing costs for new plants is the “small modular reactor.” These new designs can be factory-built in a timely manner — using the best quality control methods known. Installation can be similarly standardized. And finally, we are seeing progress in the government regulation arena — one of the biggest bottlenecks in the entire process.

Canadian and United States nuclear regulators have signed a first-of-a-kind Memorandum of Cooperation that will see our two countries collaborate on the technical reviews of advanced reactor and small modular reactor technologies.

Kristine Svinicki, Chair of the United States Nuclear Regulatory Commission, and Rumina Velshi, President and CEO of the Canadian Nuclear Safety Commission, signed the MOC in Ottawa that is specifically designed “to increase regulatory effectiveness through collaborative work on the technical reviews of advanced reactor and small modular reactor technologies.”

Perhaps these government agencies will finally stop obstructing new technologies and will actually begin assisting in their implementation.

Nuclear Fusion: When, Not If

Here’s a brief sample of some different approaches to fusion.

First Light: This company originated in the University of Oxford and was founded specifically to address the urgent need to decarbonise the global energy system. Their idea involves firing a projectile at a target that contains hydrogen atoms. The shockwave from the impact of the projectile creates a shockwave that crushes the fuel and briefly this reaction will produce plasma that is hotter than the sun and denser than lead.

Commonwealth Fusion Systems: A private company created by former Massachusetts Institute of Technology (MIT) staff, CFS has raised significant funding of over $100m. It is focusing on developing a Tokamak system but its key innovation is in superconducting magnets. They hope to build powerful enough magnets so they can build smaller and cheaper Tokomaks to contain the plasmas required to generate fusion.

TAE Technologies: With backing from Google and other high tech investors, this California-based company is using a different mix of fuel to develop smaller, cheaper reactors. They want to use hydrogen and boron as both elements are readily available and non-radioactive. Their prototype is a cylindrical colliding beam fusion reactor (CBFR) that heats hydrogen gas to form two rings of plasma. These are merged and held together with beams of neutral particles to make it hotter and last longer.

US Navy: Worried about how to power their ships in the future, the US Navy has filed a patent for a “plasma compression fusion device”. The patent says that it would use magnetic fields to create “accelerated vibration and/or accelerated spin”. The idea would be to make fusion power reactors small enough to be portable. There’s a lot of scepticism that this approach will work.

One of the main challengers with ambitions to make fusion work is a company based in British Columbia, Canada called General Fusion. Their approach, which has gathered a lot of attention and backing from the likes of Amazon’s Jeff Bezos, combines cutting edge physics with off the shelf technology.

This approach sees a hot gas plasma injected into a ball of liquid metal inside a steel sphere. It is then compressed by pistons, much like in a diesel engine.

“The pistons all fire simultaneously and collapse the cavity with the fuel inside,” said Michael Delage, the company’s chief technology officer.

“So at the peak of that compression when the fuel bursts into fusion reaction, it is surrounded on all sides by liquid metal so the energy goes into the metal and you take this hot liquid metal and boil water, make steam and make electricity.”

General Fusion say they hope to have a working model within five years. __ https://www.bbc.com/news/science-environment-50267017

With oil still the world’s most vital fuel, the U.S. became a net oil exporter last December for the first time in nearly 75 years.

By 2022, crude exports are supposed to more than double to 6 million b/d; by 2024, the U.S. could be the world’s largest crude oil exporter.

We are quickly becoming a stable and predictable supplier to help meet non-stop rising global demand.

In particular, much more oil usage in plastics manufacturing, plane travel, and SUVs is assured.

In September, the U.S. Department of Energy projected that global oil consumption jumps another 20% by 2050 to over 122 million b/d – explaining why oil investment is a totally legitimate and essential enterprise. __ https://www.forbes.com/sites/judeclemente/2019/11/14/us-oil-production-set-to-keep-rising/#3b88eb5053a8

And don’t forget natural gas, which provides a useful substitute in place of crude oil for many chemical, materials, and energy applications. North America has centuries’ worth of natural gas resources, not counting methane hydrates.

US Natural gas is fueling a global plastics boom

Without abundant, reliable, affordable energy, modern civilisation would screech to a halt. The only reliable & affordable forms of large-scale energy at this time are nuclear, coal, gas, oil, hydro, and biomass. Wind & solar are intermittent, unreliable and exorbitantly expensive when examined honestly. “Renewables” cannot support advanced societies and will only destroy these societies in time if pushed too far.

In the long run, only nuclear fission (and fusion) can provide reliable and affordable large scale energy production that will allow an abundant and expansive human future.

Energy for a Galactic Civilisation

Artist’s impression of an active galactic nucleus. The supermassive black hole at the center of the accretion disk sends a narrow, high-energy jet of matter into space, perpendicular to the black hole’s accretion disc. Events and objects such as this can create enormously accelerated cosmic particles, which can smash into heavy atomic nuclei and blast them apart into smaller components. DESY, Science Communication Lab

Dark Matter as an unlimited source of 100% efficient fuel

A contrarian view of black holes