Not as Bad as Africa 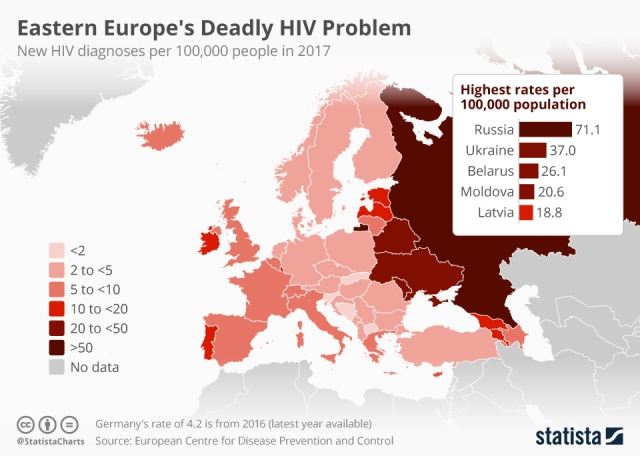 Russian HIV incidence rates are not nearly as high as in sub Saharan Africa. But Russia accounts for roughly 2/3 of new HIV cases in Europe. Almost 1% of all Russians have HIV. And the numbers continue to grow.

Why Russian Healthcare is in Crisis

The Russian Federation has free and universal state healthcare, but in name only. Changes to Russian’s national healthcare system since the fall of the Soviet Union have attempted to provide Russians with an acceptable level of healthcare services. However, a continued lack of funds, a lack of medical and technical equipment and supplies and an outdated approach to medical training present major obstacles to alleviating the Russian healthcare crisis…

… Russia’s healthcare system is currently characterized by a neglect of primary care, an emphasis on treatment rather than prevention, overuse and misuse of doctors, underuse of nurses and inadequate access to medications.

These issues have contributed to a severe Russian healthcare crisis, affecting the health of the Russian population. Inequality in access to treatment has contributed to an epidemic of HIV and TB in Russia. __ https://www.borgenmagazine.com/russian-healthcare-crisis/

The system is simply not prepared to treat the problem — it will not even acknowledge the problem. In many places a substantial bribe is necessary just to be seen by a doctor. If the bribe is not high enough, you can forget about treatment — particularly any treatment that might possibly work. 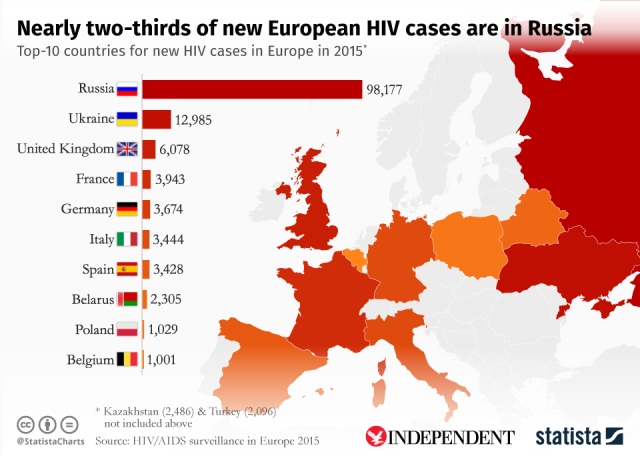 HIV prevalence has been growing up to 10% per year recently in Russia. Estimates for total prevalence in Russia range between 1 million and 3 million cases. New cases are largely split between intravenous drug users and heterosexual spread. More Prisons are another breeding ground for the spread of diseases such as HIV, TB, Hepatitis Virus B and C, and others.

The ongoing health crisis in Russia presents a frightening picture of a nation’s leaders undermining its own citizens’ lives through neglect, corruption, and a quest for power. Russia is a wealthy country with vast resources at its disposal—an estimated 40% of the world’s natural resources—but these riches have limited benefit for its citizens’ health… Russia is widely regarded as one of the world’s superpowers, yet it suffers from HIV infection rates higher than most developing countries, and one of the highest rates of alcoholism in the world. Russia’s massive public health problems result from complex and deep-seated societal norms paired with a government that has demonstrated inadequate interest in fixing them. __ Yale Global Health Review

This is not the portrait of a superpower, but of a corrupt state that is teetering toward failure.

An estimated 1.7 million people are living with HIV in this region, including 150,000 newly infected in 2018. New HIV infections in the region increased by 29% between 2010 and 2018. Most of the new infections in the region are among key populations, with 63% of infections occurring among people who inject drugs, gay men, and other men who have sex with men. __ https://www.kff.org/global-health-policy/fact-sheet/the-global-hivaids-epidemic/

Not as Bad as Africa

There are places in Africa where over half the women of child-bearing age are infected with HIV. For Russia, that number is no higher than 1% for most of the country. But many countries in sub Saharan Africa have admitted the problem, and allow foreign medical supplies into the country for distribution to infected people. This has slowed the incidence rate for new infections across many African nations. Russia has not been so lucky, since the system does not devote significant resources to the problem — and does not allow outside help to compensate for the corrupt neglect that is rampant inside the country’s civilian medical corps.

Despite all that, Russia is generally a civilised country. If the broken-down health care system allows prevalence rates to continue to rise, eventually Russians will demand changes. But will its mafia government pay any attention to ordinary people? It never has before.

Russia is in the midst of a massive, largely ignored public health crisis. Although considered a superpower due to its vast natural resources and military spending, Russia stands out for its overwhelmingly poor health as well. Many preexisting societal circumstances have contributed to the emergence of disease, but negligent and corrupt government actions have exacerbated problems, allowing them to become endemic. These missteps have already caused life expectancy in Russia to fall thirteen years below that of any other developed nation, and the consequences will only increase if Russia’s leaders continue to enact policies that ignore the best interests of its populace. __ https://yaleglobalhealthreview.com/2016/12/21/russia-the-sickness-of-a-nation/