Since the split from the chimpanzee lineage, the human brain has increased three-fold in size and has acquired abilities for vocal learning, language and intense cooperation.

… the increasing availability of genome sequences from humans, chimpanzees and other primates, as well as even our closest extinct relatives, the Neanderthals and Denisovans [3], allows us to precisely identify most of the about 16 million genetic changes that occurred in the human lineage, i.e. after the split from the chimpanzee lineage and before the most recent common ancestor of currently living humans.

… recent experimental 81, 82, 83, 84 and theoretical [85] evidence now strongly suggests that an expansion of so-called ‘basal progenitor cells’ is sufficient to cause an increase in cortical size and folding that echoes changes seen during evolutionary increases in cortical size and folding. __ Molecular Basis of Human Brain Evolution in Current Biology Vol. 26 Issue 20 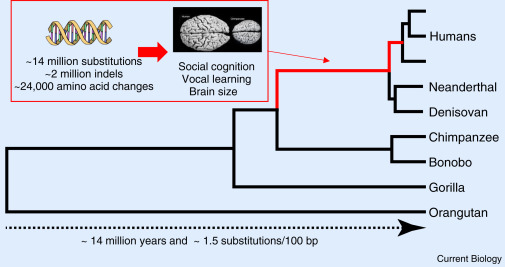 The human brain is larger and structured somewhat differently than the brains of other primates, but it is also different in function — displaying “cognitive functional networks” that are unique.

… Here, we studied the expansion and evolutionary genetics of higher-order cognitive networks in recent human brain evolution, with a particular focus on the evolutionarily genetic drive of the DMN. Recent genome-wide studies comparing the human genome with that of the chimpanzee have identified a unique set of loci that displayed accelerated divergence in the human lineage17,18. Genes associated with these so-called human accelerated regions (HAR) have been linked to neuron development, but also the development of brain disorders such as autism spectrum disorder (ASD)19. We integrate genetic data with comparative neuroimaging and present that regions of higher-order cognitive networks are highly expanded in recent human brain evolution. We show that HAR genes likely have played a crucial role in this, being highly expressed in expanded cognitive networks (and in particular the DMN) and being differentially expressed in the human brain compared to chimpanzees and macaques __ Nature Communications 10 (#4839 Oct 2019)

The human brain evolved differently than the brains of other primates and hominids. If not, I would not be writing this and you would not be reading it. The question of whether culture plays a larger part in the evolution of human cognition — or whether genes do — is a matter of healthy scientific debate. For example:

Tomasello and Rakoczy (4) highlight this point by noting that “if we imagine a human child born onto a desert island, somehow magically kept alive by itself until adulthood, it is possible that this adult’s cognitive skills would not differ very much—perhaps a little, but not very much—from those of other great apes (ref. 4, p. 121)”. __ quoted in “Unraveling the Evolution of Uniquely Human Cognition” Evan MacLean published PNAS June 7 2016

Without the benefit of human culture, the growing child would not learn language, music, mathematics, and other uniquely human skills that have led to our modern technological age.

On the other hand, if we imagine a chimpanzee taken immediately after birth into an affluent and well-educated human household, given the best of human education, social life, and healthcare — while also given the best chimpanzee nutrition and exercise — it is likely that this chimp’s adult cognitive skills would not differ very much from those of other adult chimpanzees raised under less cognitively favorable conditions.

The 10,000 Year Explosion by Henry Harpending and Greg Cochran, looks closely at an example of the interaction of culture and genetic evolution in a small breeding population over the past 10,000 years. (Full text PDF)

The thesis of The 10,000 Year Explosion is that the largely inbred population of Ashkenazim artificially (culturally) selected for intelligence, resulting in the disproportional over-representation of Ashkenazim among Nobel Prize winners, top mathematicians and theoretical physicists, and other groups of highly learned and highly accomplished members of modern western societies.

There are several key observations that motivate our hypothesis.

The first is that the Ashkenazi Jews have the highest average IQ of any ethnic group, combined with an un-usual cognitive profile, while no similar elevation of intelligence was observed among Jews in classical times nor is one seen in Sephardic and Oriental Jews today.

The second is that the Ashkenazim experienced very low inward gene flow, which created a favorable situation for natural selection.

The third is that they experienced unusual selective pressures that were likely to have favored increased intelligence. For the most part they had jobs in which increased IQ strongly favored economic success, in contrast with other populations, who were mostly peasant farmers. They lived in circumstances in which economic success led to increased reproductive success.

The fourth is the existence of the Ashkenazi sphingolipid, DNA repair, and other disease clusters, groups of biochemically related mutations that could not plausibly have reached their present high frequencies by chance, that are not common in adjacent populations, and that have physiological effects that could increase intelligence. ___ https://web.mit.edu/fustflum/documents/papers/AshkenaziIQ.jbiosocsci.pdf

The authors of the book are not trying to champion the cause of Judaic culture or religion. Neither are they suggesting that the Ashkenazim are some sort of “master race.” Rather they are suggesting that culturally driven selective breeding within a relatively small population of humans can — over time — lead to evolutionary genetic distinctions that provide advantages (and disadvantages) to some members of that population.

Consider the Potential for Human Evolution on a Larger Stage

If 20% of Nobel Prize winners are Jewish, and only 0.2% of the human population is Jewish, one might suspect that over the past 10,000 years evolution has performed something of a cognitive miracle on that relatively small group of people. 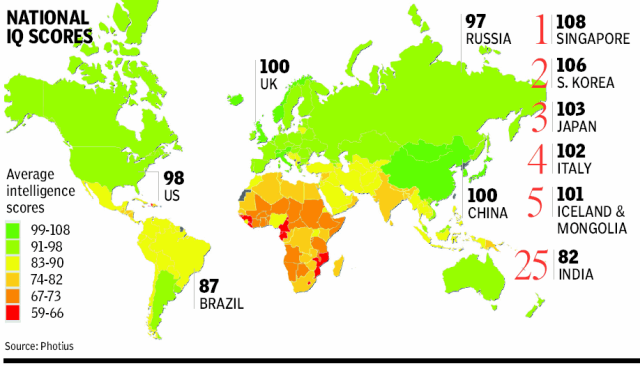 Since all modern humans are presumably derived from hominids that originally evolved inside Africa, it is a challenge to discover just when and where the different breeding populations diverged, in terms of brain evolution. We can be sure that genes and culture interacted every step of the way. But of course, scientifically minded humans want to know the details behind the divergence.

Neanderthals were very early (archaic) humans who lived in Europe and Western Asia from about 400,000 years ago until they became extinct about 40,000 years ago. Denisovans are another population of early humans who lived in Asia and were distantly related to Neanderthals. (Much less is known about the Denisovans because scientists have uncovered fewer fossils of these ancient people.) The precise way that modern humans, Neanderthals, and Denisovans are related is still under study. However, research has shown that modern humans overlapped with Neanderthal and Denisovan populations for a period, and that they had children together (interbred). As a result, many people living today have a small amount of genetic material from these distant ancestors.

The percentage of Neanderthal DNA in modern humans is zero or close to zero in people from African populations, and is about 1 to 2 percent in people of European or Asian background. The percentage of Denisovan DNA is highest in the Melanesian population (4 to 6 percent), lower in other Southeast Asian and Pacific Islander populations, and very low or undetectable elsewhere in the world.

Is it possible that archaic human DNA contributed somehow to the cognitive divergence between the different continental groups? Difficult to say.

We have seen the eruption of a cognitive divergence between the Ashkenazim and surrounding European populations, over a relatively short period of time. It seems altogether possible that given the longer period of time since the out-migration of modern humans (“Out of Africa”) with the generally isolated breeding populations on the different continents that prevailed for tens or hundreds of thousands of years — that other cognitive divergences could have occurred.

It is likely that at the time of the out-migrations from Africa that the IQ differences between those who left and those who stayed were not as distinctly divergent as the differences in IQ distributions now between the various modern human populations.

IQ and Achievement Match Too Closely to be Coincidence

The correlation between the wealth of a nation and its average IQ was first determined as linear, by statistical analysis. But more careful analysis suggests that the correlation is exponential, which makes the real-world situation even more serious and consequential.

Whatever the details of the “how” of divergent cognitive evolution of the human brain in the different continents and regions, the consequences in terms of cultural and technological development could not be more stark. The average cognitive deficit can be compensated somewhat by a “smart fraction” or market dominant minority. It may also be partially compensated by natural resource wealth, as in the MENA region. But when a nation ejects its “smart fraction” or is otherwise unable to develop its natural resources, the miserable consequences of the evolved cognitive deficit are difficult to escape for most of the population.

The use of Quantitative Traits (QT) as phenotypes provide increased statistical power over categorical association approaches and when combined with a GWAS creates a strategy for identification of unanticipated genes that modulate cognitive processes and cognitive disorders. ___ Genome-Wide Strategies for Discovering Genetic Influences on Cognition . . . in Cognitive Neuropsychiatry 2009

Every year brings new discoveries linking specific alleles with cognitive aptitude and educational attainment. As the evidence for the linkage accumulates, ever more objective ways of measuring cognitive ability also are being developed.

Each person accumulates between fifty and a hundred mutations over the course of his lifetime, since conception.

The mutational site in the DNA can be of a number of types. The simplest and most common type is nucleotide-pair substitution, which can lead to amino acid substitution or to premature stop codons. Small deletions and duplication also are common. Even a single base deletion or insertion produces widespread damage at the protein level; because mRNA is read from one end “in frame” in groups of three, a loss or gain of one nucleotide pair shifts the reading frame, and all the amino acids translationally downstream will be incorrect. Such mutations are called frameshift mutations. __ Source

Gene duplication is another source of genetic divergence, as are changes on the chromosomal level. Divergent changes in gene expression & epigenetics can also occur on many levels, leading to significant changes in phenotypic characteristics. These changes can be much more difficult to detect and quantify, but researchers are making strides even there.

Cognition, emotional stability, and executive function are all strongly influenced by inheritance. Here is one example of a heritable influence on human behaviour, but there are many more. If you give neural systems of various types just the tiniest tweak, you may discover some surprisingly large effects.

We are learning more about the past, present, and future evolution of animal cognition every year. Expect some politically incorrect surprises.

An interesting comparison of cultural evolution vs. biological evolution

This entry was posted in Cognition, Evolution, Genetics and Gene Expression, Human Brain and tagged genes and IQ. Bookmark the permalink.