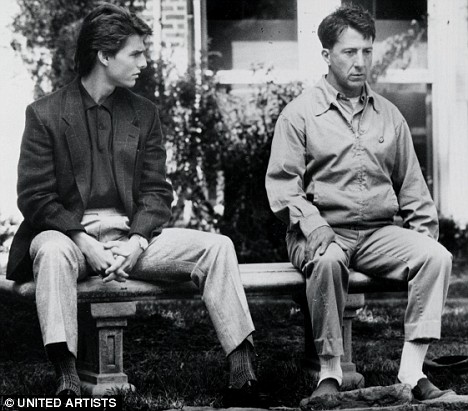 The most familiar autistic savant to most of us is the fictional Raymond Babbit (played by Dustin Hoffman) from the movie “Rain Man.” Raymond displayed superhuman skills of recall which earned his scheming brother (played by Tom Cruise) a tidy sum at the Las Vegas gaming tables.

There are at least four ways persons may find themselves with savant mental skills such as those displayed by “Rain Man.”

In congenital savant syndrome the extraordinary savant ability surfaces in early childhood. In acquired savant syndrome astonishing new abilities, typically in music, art or mathematics, appear unexpectedly in ordinary persons after a head injury, stroke or other central nervous system (CNS) incident where no such abilities or interests were present pre-incident. __ Source

In 2002, two men savagely attacked Jason Padgett outside a karaoke bar, leaving him with a severe concussion and post-traumatic stress disorder. But the incident also turned Padgett into a mathematical genius who sees the world through the lens of geometry.

Padgett, a furniture salesman from Tacoma, Washington, who had very little interest in academics, developed the ability to visualize complex mathematical objects and physics concepts intuitively. The injury, while devastating, seems to have unlocked part of his brain that makes everything in his world appear to have a mathematical structure.

“I see shapes and angles everywhere in real life” — from the geometry of a rainbow, to the fractals in water spiraling down a drain, Padgett told Live Science. “It’s just really beautiful.” __ Source

Allan Snyder has demonstrated that the use of Transcranial Magnetic Stimulation on certain parts of the brain may unlock savant-like cognitive abilities. More

The individuals in the graphic below came by their savant mental skills in various ways:

The fourth way for emergence of savant skills is Sudden Savant Syndrome (SSS). This seemingly miraculous occurrence may happen at any time in a person’s life for no obvious reason. It is different from “acquired savant syndrome” in that with SSS there is no injury or other obvious precipitating event.

[In] sudden savant syndrome an ordinary person… has an unanticipated, spontaneous epiphanylike moment where the rules and intricacies of music, art or mathematics, for example, are experienced and revealed, producing almost instantaneous giftedness and ability in the affected area of skill sets. Because there is no underlying disability such as that which occurs in congenital or acquired savant syndromes, technically sudden savant syndrome would be better termed sudden genius.

A 28-year-old gentleman from Israel, K. A., sent his description of his epiphany moment. He was in a mall where there was a piano. Whereas he could play simple popular songs from rote memory before, “suddenly at age 28 after what I can best describe as a ‘just getting it moment,’ it all seemed so simple. I suddenly was playing like a well-educated pianist.” His friends were astonished as he played and suddenly understood music in an entirely intricate way. “I suddenly realized what the major scale and minor scale were, what their chords were and where to put my fingers in order to play certain parts of the scale. I was instantly able to recognize harmonies of the scales in songs I knew as well as the ability to play melody by interval recognition.” He began to search the internet for information on music theory and to his amazement “most of what they had to teach I already knew, which baffled me as to how could I know something I had never studied.”

… [A] 43-year-old woman woke up one night in December 2016 with what she called “the urgent need to draw a multitude of triangles, which quickly evolved to a web of complex abstract designs. I stayed up into the morning with a compulsive need to draw, which continued over the next three days at an intense level.” She had no prior interest or training in art. By the third day she was working on a piece of art she named “the Mayan,” which took her two weeks to complete. Three months later she had created 15 pieces whose styles were reminiscent of artists including Frida Kahlo and Picasso. She presently spends about eight hours a day on her craft in addition to her work as a real estate agent. Incorporated into most of her pieces of art is mandalic style of which she was totally unaware prior to her sudden art ability.

Many people pick up a new skill or hobby, especially later in life. So what is different here?

—The skill has an abrupt onset with no prior interest in or talent for the newly acquired ability.

—There is no obvious precipitating event or CNS injury or disease.

—The new skill is automatically coupled with a detailed, epiphany-type knowledge of the underlying rules of music, art or math, for example—none of which the person has studied. They know things without ever having learned them.

—The new skill is accompanied with an obsessive-compulsive (OCD) component; there is the overpowering need to play music, draw or compute. It is as much a force as a gift, as is usually the case with both congenital and acquired savant syndromes.

—There is a fear the gift and OCD is evidence of losing one’s mind, and a tendency to hide the new ability from others rather than display it.

Darold Treffert was studying 14 cases of SSS at the time he wrote the above Scientific American piece. Ten were female and four were male — with an average age of onset of 47.2 years.

It seems that for “spontaneous savants,” various components of brain networks suddenly “clicked” and began working at a higher order of function than previously. Many persons would find the prospect of moving to a higher level of function quite attractive.

… the acquired savant particularly, and now the sudden savant, reinforce the idea that not only is the line between savant and genius a very narrow one but also underscores the possibility such savant abilities may be dormant, to one degree or another, in all of us. The challenge is to tap those special abilities without head injury or CNS incident but rather with some nonintrusive, more readily available methods. __ Darold Treffert

A Release of Inhibition?

Our brains are a mass of inhibition. Without this inhibition we would all go mad, and suffer from incessant and uncontrollable seizure disorders. But we could all do with a bit less inhibition from time to time. In the “spontaneous savant” this release of inhibition seems to have occurred unprompted, out of the blue. But in the more common cases of savant skills, disinhibition occurs as a result of injury.

Ways that Neural Inhibition Can Be Released

Brain Damage: Savants with congenital and acquired savant syndromes have suffered from some kind of brain damage — either before birth or after, respectively.

Behavioural neurologist Bruce Miller, of the UCSF Memory and Aging Center in San Francisco… has come up with a new theory to explain the phenomenon. He believes the talents of a savant emerge when the areas damaged — those associated with logic, verbal communication, and comprehension — have inhibited latent artistic abilities already present. According to this theory, these hyper skills, such as great proficiency in music, manifest themselves as the areas of the right brain associated with creativity operate unchecked for the first time. __ https://nationalpost.com/health/from-head-injury-to-math-genius-on-savant-syndrome-and-the-possibility-of-a-little-rain-man-within-us-all

In the case of transient induced savant skills, electromagnetic stimulation is used to “inhibit the inhibition,” releasing other parts of the brain from their neural restraints. How it works:

Snyder et al. (2003) directed low-frequency rTMS for 15 min over the LATL [Left Anterior Temporal Lobe] of 11, right-handed, healthy participants. The participants were given 1 min to draw a dog, horse or face from memory, before, during, immediately after and 45 min after rTMS treatment.

Magnetic stimulation caused a major change in the schema of the drawings of 4 out of 11 participants. Two of these also underwent sham (inactive) stimulation either the week before or after the real test. The changes in drawing style were observed only following active stimulation and not after sham stimulation. In some cases, the drawings returned to ‘normal’ 45 min after rTMS ceased. Young et al. (2004) also reported rTMS-enhanced drawing skills.

Several participants reported greater awareness of detail in their surrounds after active rTMS. One participant published his experience, stating that he ‘could hardly recognize the drawings as his own even though he had watched himself render each image’. (Osborne 2003, p. 38).

… Low-frequency rTMS was applied to the LATL for 15 min (Snyder et al. 2006). Participants were presented with between 50 and 150 discrete elements on a monitor with rTMS and sham stimulation. Each session involved 60 trials, that is 20 opportunities to guess the number of elements before, immediately after and 1 hour after rTMS. The exposure time was 1.5 s: too short for anyone to count the number of elements, but sufficiently long to resemble exposure times in real-life situations (figure 1).

Out of 12 participants, 10 improved their ability to accurately guess the number of discrete elements immediately following magnetic pulse stimulation. Out of these 10 participants, 8 became worse 1 hour later, as the effects of the magnetic pulses receded. None of those eight participants exhibited that pattern during the sham session. The probability of as many as 8 out of 12 people doing the best just after rTMS and not just after the sham by chance alone is less than 1 in 1000 (p=0.001; figure 2). __ Allan Snyder 2009

The US DARPA is doing research with military personnel using electromagnetic brain stimulation, in the attempt to sharpen a number of thinking skills relating to combat.

By delivering electrical pulses into the body’s nervous system, the scientists aim to modulate the brain’s neural connectivity and production of key chemicals. That kind of neural tuning can “influence cognitive state—how awake you are, or how much attention you’re paying to something you’re viewing or performing,” says Doug Weber, a bioengineer at DARPA who heads up the TNT project. __ Spectrum IEEE

If I had my preference, I would take the spontaneous sudden genius savant approach. But the use of electromagnetic or photonic stimulation to induce temporary savant skills is a viable alternative, when the first one fails.

Pharmacology is another approach to both enhancing cognition and for disinhibiting parts of the brain. Drugs are a less focused approach than electromagnetic and photonic stimulation, but some pharmaceuticals may be effective in triggering a spontaneous savant-like mental condition in some people.

Snyder 2009: A rich source of information

I have argued that the extraordinary skills of savants are latent in us all and that they can be induced artificially owing to the inhibiting influence of low-frequency rTMS, that is, by turning off part of the brain, not by exciting it. My hypothesis is that savant skills are facilitated by privileged access to raw, less-processed sensory information, information that exists in all brains but is inaccessible owing to top-down inhibition. Thus, autistic savants tend to see a more literal, less filtered view of the world. Their ‘skill’ or performance does not depend on active learning, but simply on an effortless ‘reading off’ of this less-processed information.

… such savant abilities may be dormant, to one degree or another, in all of us. The challenge is to tap those special abilities without head injury or CNS incident but rather with some nonintrusive, more readily available methods.

An earlier Al Fin look at transient induced savantism from 2010