A Spectrum of Homelessness in the US

Brief Summary: Homelessness in the US comes from many causes. Each cause of homelessness — whether bad luck, drug addiction, mental illness, or the phenomenon of the criminal transient who chooses to be homeless and prey on weaker homeless — will need its own policy approach. When most state mental health institutions shut their doors decades ago, large numbers of the mentally ill were dumped onto the streets. Similarly, as more drugs are decriminalized by states, large numbers of former “drug criminals” are being dumped onto the streets from prisons, raising the numbers of homeless. Sanctuary cities that do not enforce crimes by illegal aliens similarly dump criminals onto the streets.

Not All Homeless are Alike

Some people are temporarily without a place to call home, due to bad luck or bad decisions, for weeks or even months. Others will be homeless for the foreseeable future due to chronic mental illness, disability, or intractable drug addiction. And then there are others who intentionally choose a transient’s life of crime or of sponging off other people. It makes no sense to class these different groups together under the same name of “homeless.” We are most interested here in the perpetually homeless group who are not likely to spontaneously recover.

Brandon, described below, is an example of a young adult drug addict who has chosen homelessness in San Francisco because it is so easy there to combine the homeless lifestyle with his opiate addiction. A brief glimpse into San Francisco (and Seattle) homelessness:

“I’d say it’s more chaotic here. Drugs, it’s easier to get them here, than there,” he says.

He is a heroin addict but recently switched to smoking the far more powerful drug fentanyl.

“It’s pretty popular here now. People on the street switched over about five months ago. I guess the drug dealers finally let it happen,” he says.

We watched as he and his friends heated up the fentanyl on foil with a lighter and used the shaft of a discarded syringe as a pipe.

“That’s why you don’t see syringes on the ground,” he says. “Since the city banned plastic straws, the addicts are using syringes as pipes.”

Seattle was the first city in America to ban plastic straws. Addicts in Seattle say fentanyl is not widely used on the streets, but methamphetamine is very popular.

Brandon says people in San Francisco are more generous than Seattleites with their dollars to panhandlers who are ‘flying a sign.'”

In Seattle, he says, “They’re like, ‘Oh you are just going to spend it on drugs,’ but it’s normal for them out here.”

He says he can get $30 in 15 minutes when he ‘flies a sign’ asking for money, whereas in Seattle it could take him all day. __ KOMO News

The homeless come from distinct groups:

People in the US illegally often go through a stage of homelessness. One form of petty crime accompanying homelessness is “panhandling under false pretenses.” Falsely claiming to be a veteran, for example, or asking for money “to buy a bus ticket” or to repair one’s automobile.

It will be necessary to take distinctly different approaches when dealing with each of the three groups above. With effective assistance the first group should be able to move off the streets into safer and more secure forms of housing. The second group — being much more resistant to any forced change of lifestyle — will require a different approach. But it is very important to separate the second group from the criminals and victimizers in the third group. Once the distinct homeless factions are sorted, the law enforcement system — such as it is — will be called upon to deal with the criminal subset.

The second group — the permanent homeless class consisting largely of the mentally ill (63%) and the chronically drug addicted (63% with overlap) — will require the most ingenuity and the widest range of novel ideas to achieve a positive outcome.

In trying to “solve” the multiple problems of homelessness, concerned citizens will necessarily work at cross-purposes with elected public officials — who often have a vested interest in understating or mis-representing the problems. For example, in Los Angeles city officials were caught by the LA Times openly twisting the truth about the extent of the homeless problem in LA.

The Los Angeles Homeless Services Authority, which conducts the annual count, narrowly interpreted the data to produce much lower numbers. In its presentation of the results to elected officials earlier this year, the agency said only 29% of the homeless population had either a mental illness or substance abuse disorder and, therefore, 71% “did not have a serious mental illness and/or report substance use disorder.”

City officials in Seattle have likewise been guilty of mis-representing the data in an almost criminally self-serving manner. Rather than acknowledging the crucially distinct populations of the homeless — and the necessarily different approaches to dealing with them — officials and academics in Seattle want to handcuff their own law enforcement officers and prevent them from policing certain parts and aspects of the city. 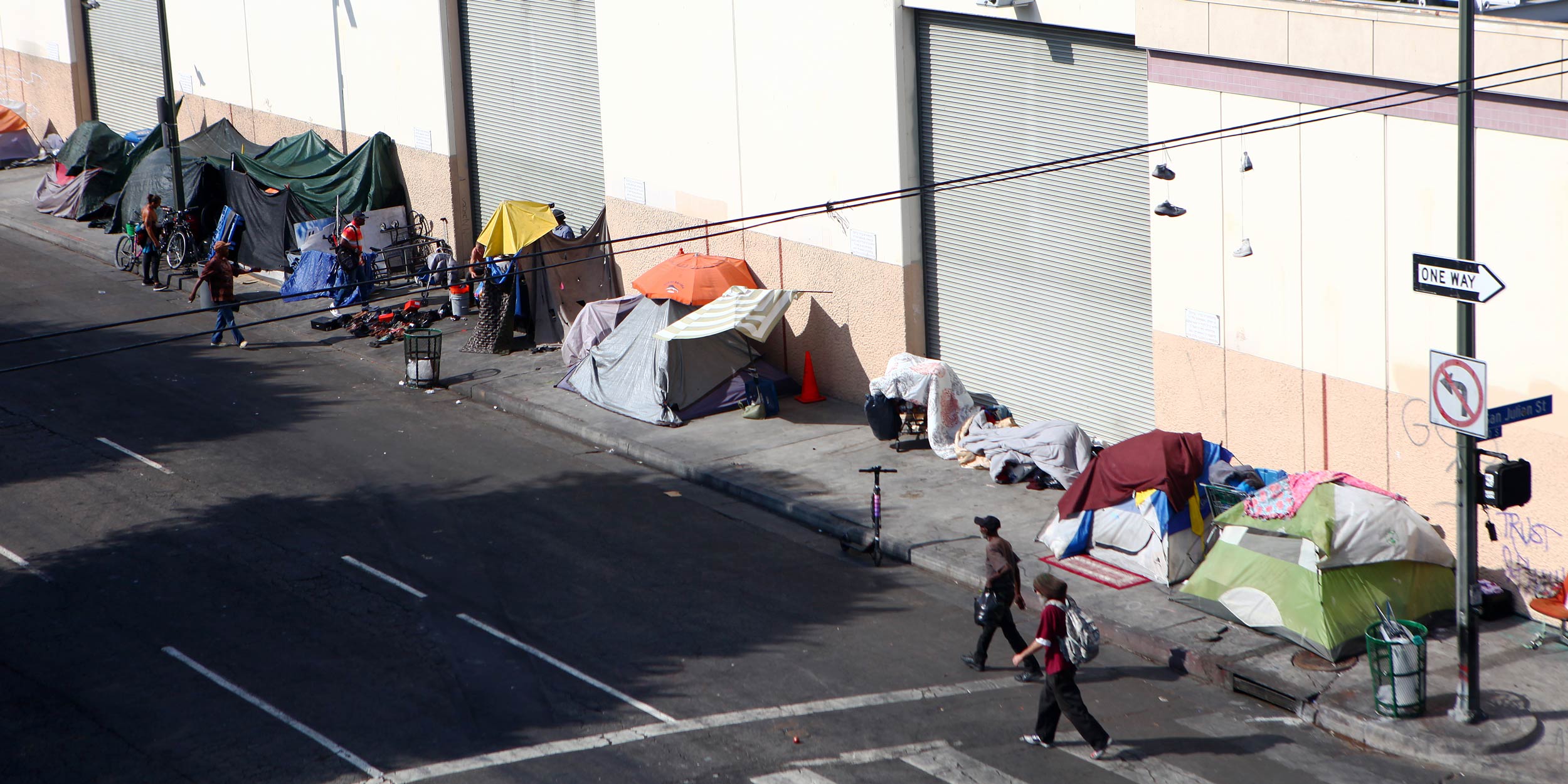 Dealing with the homeless who sincerely want help to pull themselves up and off the streets, will be challenging but doable. Dealing with criminals who prey on the homeless and on ordinary city dwellers alike, will also be challenging but doable. Once these two groups are pulled away from the remaining group of permanently homeless — who are largely either mentally ill or drug addicted — we can begin to work on finding unconventional solutions to the genuine “homeless problem.”

San Francisco has created “containment areas” inside particular sections of the city, such as the Tenderloin district. Housing is priority number one in these areas, but housing of a particular kind — and at a much lower rent than is typical for non subsidized housing.

Kathy Looper runs the Cadillac Hotel. Built in 1907, it now operates it as a nonprofit with half of the 158 rooms going to city subsidized housing. The other half goes to the “marginally employed” making less than $36,000 a year. In a neighborhood that sees renovated one-bedroom apartments going for $3,000 a month, she charges $350 to $450 a month.

“This building would be obsolete if I didn’t do the services I’ve been doing. Who wants to share a bath in today’s world? But it’s perfect for this type of housing” says Looper. On some floors, 10 rooms share one bathroom and shower.

Many of the residents are immigrants, some are undocumented workers, and some were formally homeless.

Over the past several years San Francisco has generated roughly 10,000 housing units. Many are what the city calls SROs, or single occupancy resident hotels. The Cadillac is one of them.

“A lot of the people here are not employable – let’s be realistic here,” says Looper. “This is a containment area and this is were most of the SRO housing is located, not necessarily by the city’s design but by architectural design.” __ Containment

The problem is clearly beyond the ability of city officials to deal with. Which means that if outcomes are to be favorable for both ordinary city residents and the homeless, outsiders must get involved and sometimes act contrary to the stated wishes and misguided policies of city officials. Needless to say, ordinary citizens should exercise their democratic rights to vote in dealing with city officials who pursue particularly misguided and counter-productive policies.

The mentally ill occupy a special category, since the element of choice is most lacking in this group.

Most researchers agree that the connection between homelessness and mental illness is a complicated, two-way relationship. An individual’s mental illness may lead to cognitive and behavioral problems that make it difficult to earn a stable income or to carry out daily activities in ways that encourage stable housing. Several studies have shown, however, that individuals with mental illnesses often find themselves homeless primarily as the result of poverty and a lack of low-income housing. The combination of mental illness and homelessness also can lead to other factors such as increased levels of alcohol and drug abuse and violent victimization that reinforce the connection between health and homelessness. __ Brain and Behavior

It is easier to help persons who are willing to be helped. These are the people with the most favorable long-term prospects. For the other groups, some very creative and innovative thinking is called for.

It is important to recognize the “dumping problem” when state institutions dump inmates onto the streets in increasing numbers, as legal justifications for institutionalizing them weaken when policies and priorities are changed. When mental health institutions closed in the 1970s and 1980s, the homelessness problem emerged almost immediately. In the 2020s the dumping is likely to come from city/county jails and state penal institutions.

City councils may eventually be found to be criminally negligent in their handling of the swelling problem of homelessness.

The first step is to separate the homeless into their separate and distinct situations, so that each group can be dealt with in the way most suitable for its specific problems. The police will necessarily play a strong role in this separation process, which will not be painless. But before all that, new destinations for these different classes of people must be prepared. And that will take some thinking and doing.

The rise of homelessness with the corresponding decline in public safety, has rolled over leftist-administered cities across North America. The aftermath of all this may be worthy of a post-apocalyptic tale — until it can all be rolled back in a more enlightened age that values quality of human life above ideology and political fashion.

Overall in US, Homelessness is Down: What’s up in western US cities?

More job security than since the 1948 post-war boom

“Your chance of going to work tomorrow and getting laid off is lower than it’s ever been going back to 1948,” said Ian Shepherdson, chief economist at Pantheon Macroeconomics. “That feeling of job security is very important.”

An unexpected job for a homeless person to do

This entry was posted in Coming Anarchy, Demographics and tagged psychology. Bookmark the permalink.

1 Response to A Spectrum of Homelessness in the US