Did Potatos Save the World? 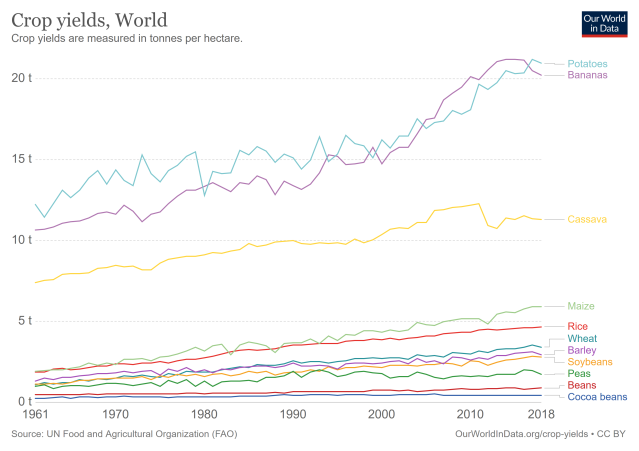 At up to 50 tonnes per hectare, the potato is the king of crop yields. Only bananas come close — but bananas only grow in the tropics. Potatoes are grown around the world, in almost all climates.

After the high yielding potato was introduced to Europe by Spanish Conquistadors in the 1500s — and after Europeans accepted the potato as a desirable food — a population explosion of sorts took place in Europe.

When the European diet expanded to include potatoes, not only were farmers able to produce much more food, they also gained protection against the catastrophe of a grain crop failure and periodic population checks caused by famine. Highly nutritious potatoes also helped mitigate the effects of such diseases as scurvy, tuberculosis, measles and dysentery. The higher birth rates and lower mortality rates potatoes encouraged led to a tremendous population explosion wherever the potato traveled, particularly in Europe, the US and the British Empire.

… The benefits of the potato, which yielded more food per acre than wheat and allowed farmers to cultivate a greater variety of crops for greater insurance against crop failure, were obvious wherever it was adopted. The potato insinuated itself into the French diet in the form of soups, boiled potatoes and pommes-frites. The fairly sudden shift towards potato cultivation in the early years of the French Revolution allowed a nation that had traditionally hovered on the brink of starvation in times of stability and peace to expand its population during a decades-long period of constant political upheaval and warfare. __ History

The great caution in such a situation is: Never become too dependent on one source of food. That is what happened in Ireland during the great Irish famine of 1845-1852. A fungal blight destroyed from 1/2 to 2/3 of the Irish potato crops for seven consecutive years. As a result, 1 million people died and between 1-2 million people were forced to emigrate out of Ireland. The potato allowed the population to multiply in the first place, but in the face of potato blight and poor growing seasons, the absence of sufficient food led to a tragic and abrupt depletion of population. 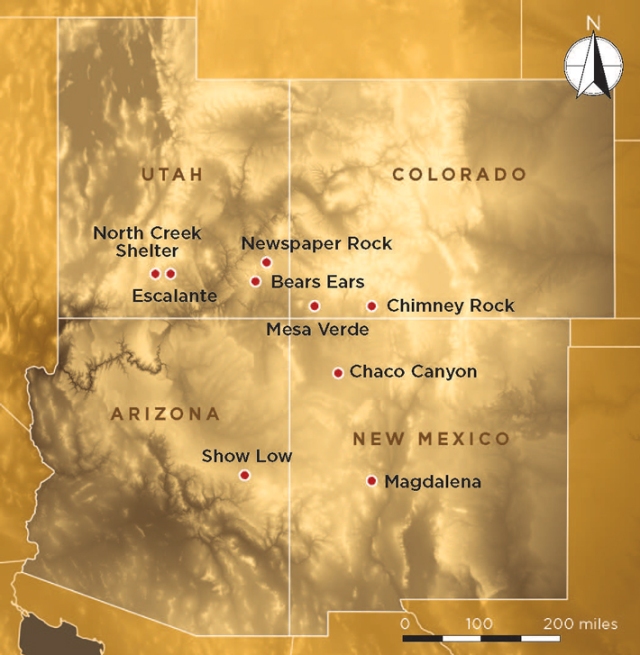 Where Did Potatoes Come From?

Almost all domesticated potatoes eaten today are of the species Solanum tuberosum, which was first cultivated between 7,000 and 8,000 years ago in the high Andes of modern-day Peru. Millennia later, following the Spanish conquest of the Inca Empire in the sixteenth century, the potato spread to Europe. There, it quickly became a dietary staple and, as an inexpensive source of many more calories per acre than other staples, is thought to have been instrumental in urbanization and industrialization. But recent archaeological studies show that people in the American Southwest were consuming potatoes up to 11,000 years ago—some 3,000 to 4,000 years earlier than were people in South America. __ Archaeology

The evidence suggests that North American natives may have cultivated a species of potato in the “Four Corners” region thousands of years before their South American relatives did so in the Andes.

The potato is a nutritious food, with many health benefits that are applicable to modern times of plenty.

Besides the potato, new world explorers and Conquistadors brought back to Europe other new crops, including maize, dry beans, squash, tomatoes, hot chilis, the sweet potato, pineapple, peanut, and others.

It is unlikely that potatoes saved the world. But the potato — along with other high yield crops — helped to facilitate the rapid population expansion in Europe and Anglospheric countries during the industrial revolution. It is even possible that the potato contributed to the sense of crowding in Europe that led to a number of wars for conquest and lebensraum from the early-1800s to the mid-1900s.

But while potatoes were feeding the soldiers who fought wars, they were also feeding the workers, scientists, and inventors who brought western civilization to the modern age, knocking at the doors of outer space and other wonders.

This entry was posted in Agriculture and tagged food. Bookmark the permalink.

3 Responses to Did Potatos Save the World?