Nancy Pelosi’s abrupt and unexpected decision last fall to hold impeachment proceedings in the US House of Representatives — specifically to impeach President Trump on the basis of his Ukraine inquiries — made it inevitable that Joe Biden’s corrupt dealings in Ukraine and China would be revealed, and that Biden would be finished politically as a result. So who is Pelosi’s big boss who ordered her to essentially burn former Vice President Biden, to make way for another front-runner? 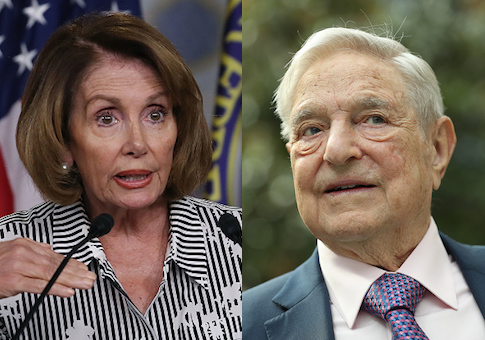 A Thirst for Power
Image Source

The grand collaboration did not start in November 2016 at the Mandarin Oriental Hotel in Washington DC. In fact, this rich cabal which has George Soros as de facto grand wizard began in the early 2000s, soon after George W. Bush was elected. The Soros – Pelosi meetup in DC immediately after Donald Trump’s election, was an emergency disaster mitigation effort.

[From November 2016:] George Soros and other rich liberals who spent tens of millions of dollars trying to elect Hillary Clinton are gathering in Washington for a three-day, closed door meeting to retool the big-money left to fight back against Donald Trump.

The conference, which kicked off Sunday night at Washington’s pricey Mandarin Oriental hotel, is sponsored by the influential Democracy Alliance donor club, and will include appearances by leaders of most leading unions and liberal groups, as well as darlings of the left such as House Democratic leader Nancy Pelosi, Sen. Elizabeth Warren and Congressional Progressive Caucus co-chairman Keith Ellison, according to an agenda and other documents obtained by POLITICO. __ Soros, Pelosi, and the Democracy Alliance Power Bloc

At the time of the Soros-Pelosi emergency conclave at the Mandarin Oriental, Barack Obama was still US President, and believed he had the authority to counsel top Democratic Party donors on future policies and candidates they should support. But his advice was not greeted with sincere smiles.

Obama had a simple message for the mandarins in the Mandarin Oriental who had spent fortunes to elect lefties and transform the country. “The average American doesn’t think we have to completely tear down the system and remake it,” he told his radical audience. And warned that the Democrat agenda should not be driven by “certain left-leaning Twitter feeds or the activist wing of our party.”

Soros and the Democracy Alliance’s activist wing elected Obama to implement a radical agenda. Now he was warning his old backers that they were in danger of backing agendas that were just too radical. __ President Obama Draws the Line

Obama may as well have been talking to the wind. The wealthy masters-of-their-universe were meeting in emergency session, and not just for their health. Donald Trump (!) had just been elected, and they were out for blood.Obama knew what these rich swamp financiers were doing, and famously remarked at the time: “He may have been elected, but he still has to govern.”

It seems fair to say that the over 100 ultra-rich backers of the “Democracy Alliance” and their leader George Soros may have disregarded Obama’s advice, for the most part.

Who are some of these ultra-wealthy far-left donors and radical activists? Democratic Party candidate for president in 2020 Tom Steyer, for one. And it is also clear that Speaker of the House Nancy Pelosi and Senator Elizabeth Warren both have close ties to the group.

Why Did the Democracy Alliance Cut Biden’s Throat?

Nancy Pelosi had become famous for her resistance to impeaching President Trump — especially if doing so might inadvertently strengthen the president with his political base, and perhaps with independents. But when she is given a direct order from the mega-donor of mega-donors, what can she do?

Political donors can be fickle and eccentric, but they are also known for looking out for their own best interests. When it became obvious that the Joe and Hunter Biden global nepotism and bribery campaign was beginning to gain some public attention, the group of mega-donors and game-players decided that Joe Biden should be dropped as a lost cause. Biden had too many weaknesses that Trump could exploit in a national campaign.

The impeachment of Donald Trump over the issue of Ukraine was certain to finish off the former US Senator from Delaware by bringing the issue of Hunter Biden front and center. The Democracy Alliance (and Pelosi) merely hoped that the sacrifice of Biden would also cause serious damage to Donald Trump’s campaign for re-election. If not, at least there would be several months to try to bring up an alternate candidate with a chance to win.

It should be no surprise to readers that political affairs in the US (and most countries) are mapped out well in advance by the ultra-rich. These are the people who — in money terms — have the most to gain and lose based upon who controls the US government agendas and budgets.

It should also not surprise readers that politicians respond to the wishes of the people who got them elected, in hopes that the same people will continue to help them get re-elected. Even in the US, holding political office for a long time is an excellent path to wealth and influence. When Mr. S. told Nancy to impeach the president, guess what she did next?

It may be worth your time to review the Politico write-up on the Mandarin Oriental meeting that took place just after Donald Trump’s 2016 election victory. And you may find it interesting to consider how Barack Obama may play into this dynamic Game of Thrones. And consider where Michael Bloomberg sits at the table. More on Bloomberg’s deep connections.

It is a high stakes gamble, with $trillions on the line. What’s more, your freedom to live and move about is also at risk at that big money poker game.

What you see on the news every night is more likely to be misinformation than genuine information. What little true information you may see online or on TV is but a miniscule fraction of what is actually happening out there.

The Democracy Alliance is a big player in the game. Try to form a reasonably accurate picture of who they are and what they want. There is a better than even chance that you are standing in their way.