Nuclear Micro-reactors In Case of Apocalypse

In Case of Zombie Apocalypse You’ll Want One of These

Ordinary nuclear power plants require massive containment structures, take years to build, and typically produce about 1 GW of power per reactor. Micro-reactors are relatively small, and produce between 1 MW and 25 MW of power. They will be built in factories using tight quality control, will take about a month to build, and will be small enough to fit in an ordinary cargo container.

Micro-reactors are a source of resilient energy that can enable a wide range of installations to enhance their range, endurance, agility and mission assurance. Micro-reactors are being designed with island-mode operations, black-start capabilities, an ability to protect against severe natural phenomena as well as man-made physical and cybersecurity threats, and to operate for several years without the need to shut down for refueling. __ Nuclear Energy Institute

In case of Zombie Apocalypse or a World-Ending Solar Event, you will need a well-shielded small nuclear reactor capable of powering a small isolated community for a decade or more before refueling. Black-start capabilities allow the tiny power plant to power-up in the context of a totally crashed power grid.

The US Department of Energy has agreed to fund a project to prepare a 25 MWe eVinci micro-reactor for demonstration by 2022.

Westinghouse says that it could develop and demonstrate the eVinci micro-reactor in less than six years, owing to its size and “high technology readiness level of individual components.” For now, it wants to… build an integral test with nuclear fuel, aiming for commercial deployment by 2024. __ Powermag

Westinghouse is hoping that micro-reactor projects will be more quickly approved by governments, more affordable to build and install, and better accepted by the public at large than giant nuclear power plants have been.

The key benefits of the eVinci micro reactor are attributed to its solid core and advanced heat pipes. The core encapsulates fuel to significantly reduce proliferation risk and enhances overall safety for the user. The heat pipes enable passive core heat extraction and inherent power regulation, allowing autonomous operation and inherent load following capabilities. These advanced technologies together make the eVinci micro reactor a pseudo “solid-state” reactor with minimal moving parts… The reactor core is designed to run for more than 10 years, eliminating the need for frequent refueling. __ Westinghousenuclear.com 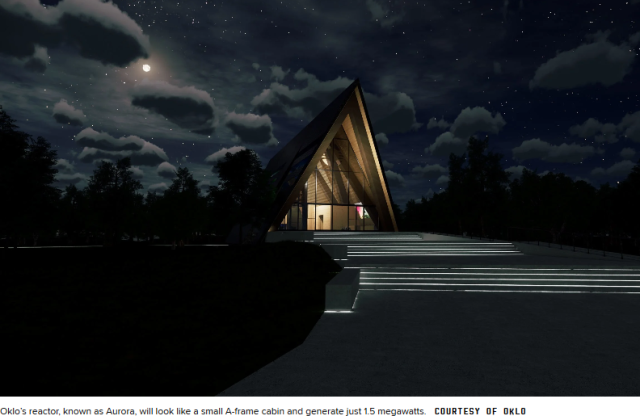 “The plant is designed to be a metal block containing uranium based metallic fuel in a heat pipe configuration that uses liquid sodium. The power conversion system is not final, but consideration is being given to organic Rankine cycle, steam, or super-critical CO2. There is insufficient technical information available publicly to put together a table of key parameters.”

“The design is such that the nuclear plant can ft into a standard shipping container. Two additional containers would house the power conversion system. With mass manufacturing of these small modules, designers claim they can produce electricity for $0.03/kWh. While the design is only in very preliminary stages, they have received venture capital funding to move the design forward.” __ Dan Yurman

The A-frame above is what the containment building for an Oklo Aurora nuclear microreactor will look like. The micro-reactor will run on spent nuclear fuel, producing roughly 1.5 MW of power.

Oklo is currently preparing an application to build its first Aurora reactor and plans to submit it to the Nuclear Regulatory Commission for review next month. DeWitte says he expects the approval process to take two years and construction of the reactor to take another. Assuming everything goes according to plan, Oklo’s Aurora would be the first American reactor to run on Haleu derived from spent nuclear fuel. __ Wired 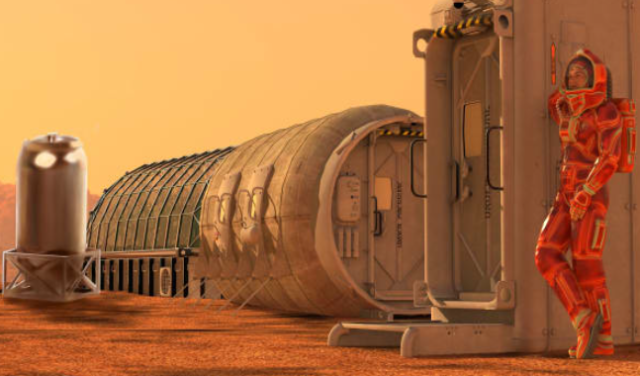 The NuGen micro-reactor is expected to have power ratings up to 20MWe.

It is a direct-cycle gas-cooled microreactor enclosed in a single module. Using a direct-cycle concept eliminates the “balance of plant” infrastructure, such as the secondary loop, allowing for a simpler design. The firm is focusing on the simplicity of its design to minimize licensing costs, operational requirements, maintenance costs and the risk of damage during transportation and siting.

… The design is adaptable for space applications. It could serve as a lunar reactor at a permanent outpost or habitat on the moon and provide heat and electricity for in situ resource utilization (e.g., for water extraction, fuel production and 3-D printing). It could also serve as the electricity generator to power an electric propulsion rocket for travel to Mars. __ Dan Yurman

More micro-reactor projects are discussed in this NEI PDF report.

The availability of safe, clean, affordable, abundant nuclear electricity & heat from micro-reactors makes a lot of things possible. Theoretically, one could put a colony of people on Antarctica and provide the power & heat to grow crops and keep everyone warm and well-lit year round. The same would be possible for floating ocean colonies, isolated island settlements, seafloor colonies, or colonies in space.

The combination of nuclear micro-reactors with advanced micro-grid technologies would provide a great deal of backup resilience and robustness to larger power-grids. This would be a particular help in places like Australia and Germany, where power grids have been steadily weakened by the growing use of unreliable junk electricity from big wind and big solar.

After a large scale solar event, EMP attack, or cyber-attack, a backup micro-reactor capable of black start could form the local micro-grid power nucleus around which the macro-grid might be re-formed and re-started in time. Bright lights at night can have an almost mystical ability to lift the spirits and restore confidence in difficult times. As in your zombie apocalypse, for example.

Just be sure to sharpen those machetes and war axes.

This entry was posted in Nuclear Power, Space Future and tagged Nuclear Energy. Bookmark the permalink.

6 Responses to Nuclear Micro-reactors In Case of Apocalypse