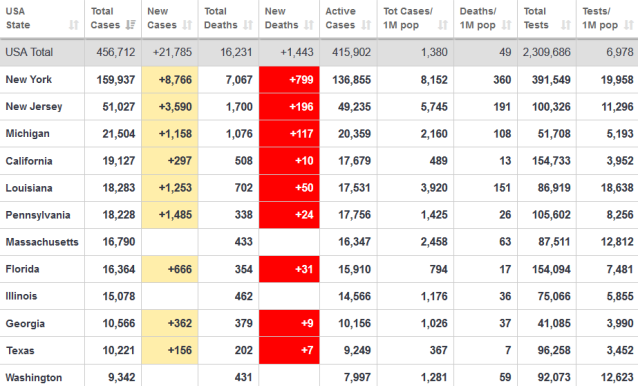 Biobot Analytics, an MIT-associated laboratory, says that the total infection count for Massachussetts may be orders of magnitude higher than the number being released to the public.

Just one section of Massachusetts could have more than 100,000 coronavirus cases — many times more than the entire state has identified at this point, according to an MIT-associated study of local sewage.

But many medical professionals say that at least a quarter of cases are asymptomatic and therefore unlikely to be identified, and many more mildly symptomatic people haven’t been tested. Biobot said its results support both of those points, as well as a lag in detected cases of the virus, which can incubate for upward of two weeks before symptoms start and ramp up over the course of another week or two. __ Big Sewage: Large # Massholes Infected

Around the world, the new disease incidence tracking curves for the Wuhan CoV-19 hotspots, have been flattening. These are mostly confirmed cases, and do not take into account the potentially huge number of undocumented and unknown cases that are likely to be out there.

In many countries, the deaths from Wuhan CoV-19 are likely to be overcounted 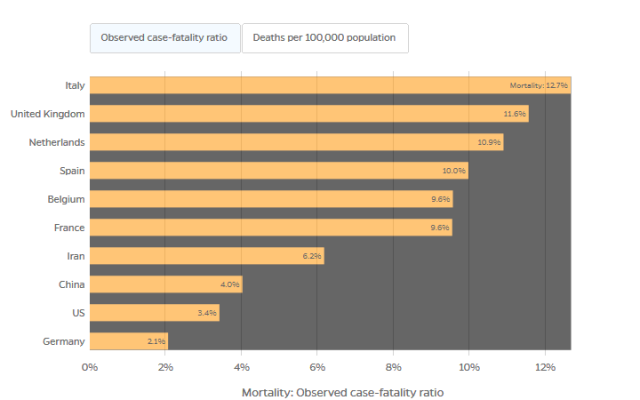 Case Fatality Rates (CFRs) are a simple ratio of number of deaths divided by number of confirmed cases. But when the numerator is overstated and the denominator is understated, it is clear that we necessarily will have CFR inflation. This appears to be the case here.

Other Kinds of Pain

In our rush to shut down our economies — in order to prevent “every possible death” and pain — we are forgetting that there are other kinds of death, and other kinds of pain, besides this panic du jour known as Wuhan CoV-19. By focusing on a single problem, we forget about the far greater problems we are creating.

As disease models try to come to grips with the reality on the ground, we begin to learn that we may have been led astray.

We tried to “flatten the curve” to preserve hospital capacity, but this is just a fancy way of saying “prolong the pain.” It was a form of rationing access to medical services, seemingly necessary given the scoliosis of this highly regulated industrial sector. But the political class and their modelers only considered one kind of pain. Other forms of pain are already here in the form of mass unemployment, waves of bankruptcy, rising despair, social division and anger, a panicked political class, and a seething fury on the part of millions of people – who had long taken their right to work and associate as a given – who suddenly find themselves under house arrest. __ JA Tucker

Public officials across the United States are flying blind against the COVID-19 epidemic. Because of a government-engineered testing fiasco, they do not know how fast the virus is spreading, how many people have been infected by it, how many will die as a result, or how many have developed immunity to it. __ Reason

Thanks to the bungling FDA/CDC twins, the US was delayed by almost six weeks in the attempt to ascertain the extent of infection in the general population. Thanks also to the duplicity of the Chinese government and the World Health Organization, it was probably too late to stop the initial surges of infection anyway. But large scale testing would have helped significantly to mitigate the early to middle stages of the crisis. It can still help now.

Americans are dying daily because of FDA regulations that have repeatedly delayed testing for the Covid-19 virus and impeded the manufacture and deployment of masks and other protective equipment. The agency’s obstructionism has angered the public—and prompted a search for scapegoats at the FDA and the White House—but there’s nothing unusual about these deadly delays. They’re an inevitable consequence of the FDA’s rules and its charter to allow only medical treatments and devices that its cautious bureaucrats have decreed to be “safe and effective.” This philosophy is conservatively estimated to be responsible for tens of millions of deaths of people waiting for the FDA to approve treatments for cancer, heart disease, and other ailments.

FDA officials insist that they’re moving during the pandemic at unusually rapid speed—and, unfortunately, that’s true. The pandemic simply reveals how lethal red tape can be, even when the agency’s leaders are trying to cut it. The debacle isn’t due to any one person or one mistake, but rather to the welter of esoteric regulations that have continually slowed the battle against the virus for the past three months.

In mid-January, a German test for identifying the virus was distributed by the World Health Organization and used in other countries to confront the pandemic early. American doctors could not use the test because it hadn’t received the imprimatur of the FDA, which instead authorized another test from the Centers for Disease Control. That test took longer to develop and proved faulty. __ FDA Bungled the Test

But in the drive to “test everybody,” we should not forget other tools — such as testing sewage — that can provide us with roughly equivalent population estimates, while we wait for the testing infrastructure to gear up.

The single most important tool we’ll need is an extensive testing infrastructure. Right now, we’re testing approximately 150,000 people a day. That’s nowhere near enough. In most states, if you have mild symptoms, you are advised not to get a test but, instead, to self-quarantine at home. This strategy, borne out of a shortage of testing capacity, has meant that we don’t know the true burden of disease, and those quarantining themselves at home are often still spreading it to family members. Furthermore, we now know that a large proportion of people who spread the disease to others have no symptoms at all—and we certainly aren’t testing them. Without adequate testing, we don’t know how many are infected, where the virus is spreading or where the hotspots are. We’re on a battlefield wearing blindfolds. __ Steve Forbes

Exploiting the Epidemic for Political Gain

We are living in a political environment where large numbers of elected officials, bureaucrats, and political journalists, would be willing to cause the deaths of tens of thousands of people if it meant that their arch-enemy — President Donald Trump — can be removed from office. Perhaps someday these pieces of detritus can be made to answer for their callous disregard for lives, and for the truth.

Perhaps the person who first evaluated this debate and the politicization of the pandemic in the United States was Trish Regan, late of Fox Business, who saw it on March 9 as another Democratic attempt to impeach the president. She was right from the start and has been let go by Fox Business for her comments. She did not dismiss the gravity of the virus, but accurately said that it was being exploited as another basis for the virtual impeachment of the president. Even punch-drunk Trumpophobics must have figured out that impeachment doesn’t work, but they are bumping hilariously into each other trying to discredit the president’s handling of the public-health crisis. Trish Regan rightly saw that the media and official Democrats were going to attack Trump from every angle on the issue — for dismissing it at first (as they did themselves) and moving too slowly to expand testing facilities (even as Abbott Laboratories brought out an easy and swift testing device), and by claiming the president was an anti-science moron until he assembled a strong professional task force to manage the crisis. They criticized his championship of hydroxychloroquine until New York governor Andrew Cuomo revealed on Monday that he was dispensing it to tens of thousands of New Yorkers with initial success. Mika Brzezinski on MSNBC had already declared that we should “follow the money,” and implied that the president had a financial interest in that drug, a decades-old malaria remedy. This was so grossly defamatory, it could pass as criminal slander if the president wanted to press his rights. __ Source 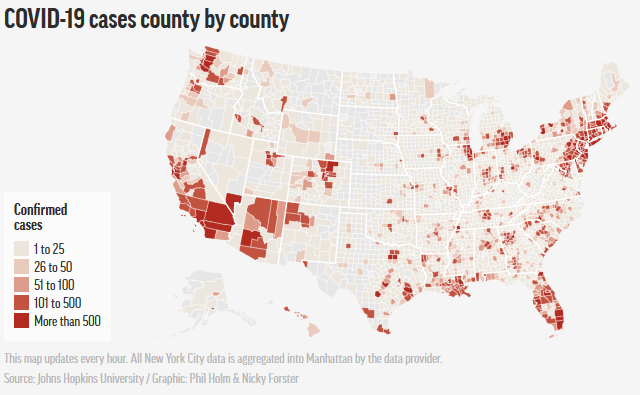 One challenge for modelers is dealing with seesawing death totals from overburdened public health departments. A state’s data might show big swings in deaths — but only because a backlog of reports showed up all at once. The tremendous leaps in deaths in a single day could throw off predictions.

… Because of the large fudge factor, it’s smart not to look at one single number — the minimum number of deaths, or the maximum for that matter — but instead at the range of confidence, where there’s a 95% chance reality will fall, mathematician Paulos said. For the University of Washington model, that’s from 50,000 to 136,000 deaths.

In the grocery store:

Leftists in the government, media, universities, and activist communities, want to spread and intensify the misery and panic as much as possible. Try to limit your vulnerability to their poison.

Dr. Scott Jensen is both a physician and a Minnesota state senator. Yesterday he was interviewed by a local television station and dropped a bombshell: he, and presumably all other Minnesota doctors, got a seven-page letter from the Minnesota Department of Health that gave guidance on how to classify COVID-19 deaths. The letter said that if a patient died of, e.g., pneumonia, and was believed to have been exposed to COVID-19, the death certificate should say that COVID-19 was the cause of death even though the patient was never tested, or never tested positive, for that disease. __ Government Disinformation

Normally level-headed observer Steve Forbes appears to have forgotten that humans are not passive automata. He excuses the government’s draconian measures of “house arrest” as necessary, although most of the countries that have controlled the epidemic have stopped far short of the totalitarian measures used in communist China (and in California, New York, Illinois, and elsewhere). If populations took the simple precautions in the short list above, viral spread would be curtailed significantly — probably just as well or better than when using the communist totalitarian measures.

In hindsight, it will be easier to see where we went wrong in our stupid subservience to the elite and unscrupulous overlords of society.

At some point, the country is going to have to redouble the protective segregation of the immune-challenged population and everyone else will have to take their chances with the coronavirus to some extent. On what we have seen, the survival rate, among the whole population, if the vulnerable elderly and infirm groups are exempted, is over 99.5 percent. __ Source