In Most Places, Lockdowns Cost More Lives than they Save

“Sheltering in place decreases your immune system. And then as we all come out of shelter in place with a lower immune system and start trading viruses, bacteria — what do you think is going to happen? Disease is going to spike,” [Doctor] Erickson explained. __ Source 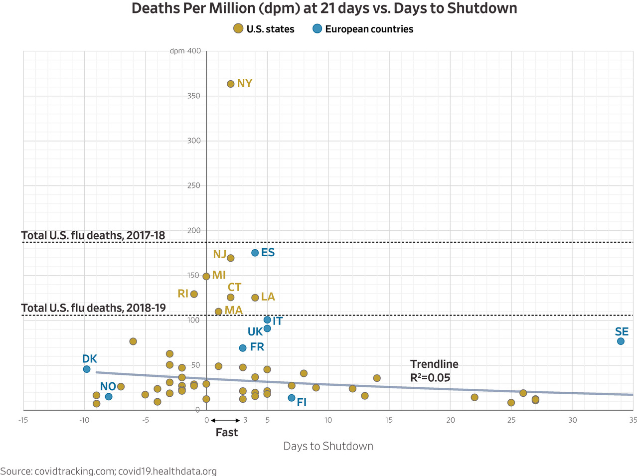 Do Lockdowns Save Lives?
Not in Most Places

No conclusions can be drawn about the states that sheltered quickly, because their death rates ran the full gamut, from 20 per million in Oregon to 360 in New York. This wide variation means that other variables—like population density or subway use—were more important. Our correlation coefficient for per-capita death rates vs. the population density was 44%. That suggests New York City might have benefited from its shutdown—but blindly copying New York’s policies in places with low Covid-19 death rates, such as my native Wisconsin, doesn’t make sense.

… Sweden’s death rate‒without a shutdown and massive unemployment‒is lower than that of the seven hardest-hit U.S. states—Massachusetts, Rhode Island, Louisiana, Connecticut, Michigan, New Jersey and New York—all of which, except Louisiana, shut down in three days or less. Despite stories about high death rates, Sweden’s is in the middle of the pack in Europe, comparable to France; better than Italy, Spain and the U.K.; and worse than Finland, Denmark and Norway. Older people in care homes accounted for half of Sweden’s deaths.

We should cheer for Sweden to succeed, not ghoulishly bash them. They may prove that many aspects of the U.S. shutdown were mistakes—ineffective but economically devastating—and point the way to correcting them. __ Source

Lockdowns kicked the can down the road. But they will have to face the music.

A large share of those staying home surely have emergency medical and surgical conditions not related to the novel coronavirus. The growing numbers ­dying at home during this crisis must include fatal myocardial infarctions, asthma exacerbations, bacterial infections and strokes. __ Bronx ER Doc Daniel Murphy

Under health department guidance, out of hospital New York deaths will often be attributed to coronavirus without tests being run, regardless of the true cause of death. But increasingly, deaths will be due to coronavirus panic — and panic-induced poverty — rather than coronavirus itself.

Time to Let the Citizens Out of their Cages

When states and hospitals abruptly stopped “nonessential” procedures and surgery, that didn’t mean unimportant care. Treatments for the most serious illnesses, including emergency care, were missed. Some estimate about half of cancer patients deferred chemotherapy. Approximately 80 percent of brain surgery cases were skipped. Perhaps half or more of acute stroke and heart-attack ­patients missed their only chances for early treatment, some dying and many now facing permanent disability. Transplants from living donors are down 85 percent from the same period last year.

We know from decades of medical science that infection causes individuals to generate an immune response (antibodies), and the population later develops immunity. Indeed, that is the main purpose of widespread immunization in other viral diseases: to assist with “herd immunity.” __ Let the People Go

Destroying hospitals in the name of coronavirus “safety”

In many countries, citizens are accustomed to being bullied by their governments. In China, Russia, many parts of the EU, the former USSR, Africa, leftist countries, the muslim world etc. — such authoritarian places can force their subjects into compliance over time. Most long-term residents of the US are not accustomed to this kind of gestapo bullying and Orwellian backstabbing by their neighbors.

Half of the citizenry is in full-scale panic, thanks to the media and government spokespersons. So it is best not to provoke these lockdown vigilantes unnecessarily. Be responsible when you get out, and try to understand the fears of those who are easily led.

The director of Australia’s International Laboratory for Air Quality and Health told the paper: ‘Outdoors is safe, and there is certainly no cloud of virus-laden droplets hanging around.’ Infectious droplets would be quickly diluted in outdoor air, director Lidia Morawska said, so their concentrations would quickly become insignificant. Bottom line: ‘It is safe to go for a walk and jog and not to worry about the virus in the air.’ __ Heather MacDonald

Avoid tight crowds, especially indoor crowds. Avoid close uncleaned spaces with poor ventilation, where many people come and go. Do not touch common surfaces. Do not touch your face while in public or without washing your hands first. Make a public display of being excessively safe, if it soothes your public. Masks can help, even if you have to make one yourself.

Especially now, as many Americans are well into their second month of a lockdown, we need to get outside for the sake of our collective mental and physical health. When taking precautions, the risks of spreading or contracting the virus in open air are slim [ed: nil], and the benefits of sun, movement, and physically distant human interaction far outweigh the virus’ risks.

China wants to treat you like its bitch. The EU has already submitted. Australia is resisting. The western news media has almost completely laid itself down for China.

Advocating for home lockdown is doing China’s work — it is exactly the outcome that China was hoping for when Beijing delayed international travel restrictions out of Wuhan by 3 crucial days, delayed announcement of person to person spread by weeks, and denied overseas investigative teams access to Wuhan hospitals and labs at a time when it would have made a difference. Even now, information about the virus origins — and the origins of the outbreak — is being tightly censored and suppressed.

One cost/benefit analysis of lockdowns

Overall US death rates are low

Stop censoring viewpoints just because they are not politically correct!

Youtube censored a video by two doctors that had garnered 5 million views, just because they did not like their ideas! There should be a reckoning. Watch the video here

Here is another place to watch the video, while Youtube allows:

China the bully. What is it that are they afraid we might find out?

The shut-down gestapo is hoping they can sneak in a socialist economy. But that would only lead to ruin.

2 Responses to In Most Places, Lockdowns Cost More Lives than they Save