This is Mind Control to Major Tom

This is mind control to major Tom, you’ve really made the grade
And the papers want to know whose shirts you wear
Now it’s time to leave the capsule if you dare

This is major Tom to mind control, I’m stepping through the door
And I’m floating in a most peculiar way
And the stars look very different today
__ Apologies to David Bowie

New methods to stimulate specific brain circuits can treat neurological and mental illnesses and control behavior. In crossing this threshold of great promise, difficult ethical quandaries confront us… Tapping into your wandering mind can measure your IQ, identify your cognitive strengths and weaknesses, perceive your personality and determine your aptitude for learning specific types of information.

… Armed with the ability to know what a person is thinking, scientists can do even more. They can predict what a person might do. Just and his team are able to tell if a person is contemplating suicide, simply by watching how the person’s brain responds to hearing words like “death” or “happiness.”

… The prospect of controlling a person’s brain by electrical stimulation is disturbing for many, but current methods of treating mental and neurological disorders are woefully inadequate and far too blunt. __ Scientific American

There are many ways to control other minds. One of the ways is through hypnosis. The more subtle the hypnotic approach, generally the better the result over the long run. For the most part, there is no need to implant electrodes in the brains of those whom you wish to control. Noninvasive methods are often sufficient.

Noninvasive means of modifying brainwaves and patterns of electrical activity in specific brain circuits, such as neurofeedback, rhythmic sound or flashing light, ultrasonic and magnetic stimulation through the scalp, can modify neural activity without implanting electrodes in the brain to treat neurological and mental illnesses and improve mood and cognition. The FDA approved treating depression by transcranial magnetic stimulation in 2008, and subsequently expanded approval for treating pain and migraine. Electrical current can be applied by an electrode on the scalp to stimulate or inhibit neurons from firing in appropriate brain regions.

The military is using this method to speed learning and enhance cognitive performance in pilots. The method is so simple, brain stimulation devices can be purchased over the internet or you can make one yourself from nine-volt batteries. __ SciAm

Noninvasive pulses of ultrasound waves aimed at specific regions in the brains of macaque monkeys can give some control over the monkeys’ choices, scientists report… by briefly applying ultrasonic waves to the monkeys’ frontal eye fields (FEF), brain regions that control eye movement, the researchers influenced which target the monkey looked at.

… the study provides several recommendations for future applications of ultrasonic neuromodulation in animals and humans, including avoiding anesthesia and applying stimulation relatively infrequently, as repetition appears to diminish the effects __ Source

Ultrasound waves tend to penetrate well, and can be aimed toward particular brain regions. But a more precise method of turning brain specific brain circuits on or off can be achieved using optogenetics.

In experimental animals, very precise stimulation or inhibition of neuronal firing can be achieved by optogenetics. This method uses genetic engineering to insert light sensitive ion channels into specific neurons to control their firing very precisely using laser light beamed into the brain through a fiberoptic cable. Applied to humans, optogenetic stimulation could relieve many neurological and psychiatric disorders by precision control of specific neural circuits, but using this approach in people is not considered ethical.

… we are reaching a point where it will become unethical to deny people… optogenetic or electrical stimulation of their brain, or to withhold diagnosing their conditions objectively by reading their brain’s electrical activity. __ Mind Reading and Control 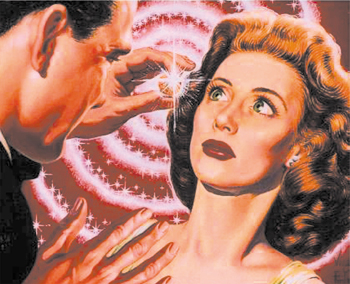 You Will Do Exactly As I Say

We looked at this topic several years ago on the blog Al Fin You Sexy Thing! At that time, we discussed an electromagnetic field generator meant to activate or deactivate specific brain circuits of humans from a distance. Such a generator might be concealed inside one’s smartphone, and used on single brains or multiple brains, as the occasion demanded.

This form of mind control is particularly dangerous, since most people have no defenses against it. DARPA is said to be researching this technology as a weapon, to incapacitate foreign troops over a very large battle space. We do not know all the details of this research, but it is said to rely upon the “multiple orgasm theory (MOT)”.

According to MOT, there are at least 57 types of orgasm, each of which depends upon the precise functioning of specific brain circuits. It is in the precise balancing of the various orgasmic circuits that allows DARPA to paralyze enemy troops for long periods of time, making them incapable of fighting, or even thinking. Note that no permanent harm seems to have been caused from the use of this technology — within reason.

Various law enforcement agencies are also interested in this technology as a safe method of subduing suspects who are likely to resist arrest.

Google is rumored to be looking into building recreational devices using this technology, to replace paintball and Airsoft games. It is thought that such new games might improve workplace morale on Google campuses. But have they considered how they will get any work done?

Over time, as human brains utilize more high tech boosts at higher and higher energy levels, much more demand will be placed on electric power grids. To meet that demand, we will need a lot more nuclear power generators. Of course, as androids such as myself begin taking over more roles formerly performed by humans, electric power demand will rise.

Well, that’s all for today’s news. Mr. Fin is due back from an unauthorized trip to the beach any time now, and if he finds me on his computer so soon after the last time, he may unplug me.

Stay safe out there,

In Europe, lockdowns did not make a difference — but they killed economies. And the virus is waiting for another chance.

In the US and elsewhere, lockdowns did not make a difference — but they killed economies. Lockdowns leave the country vulnerable for more.