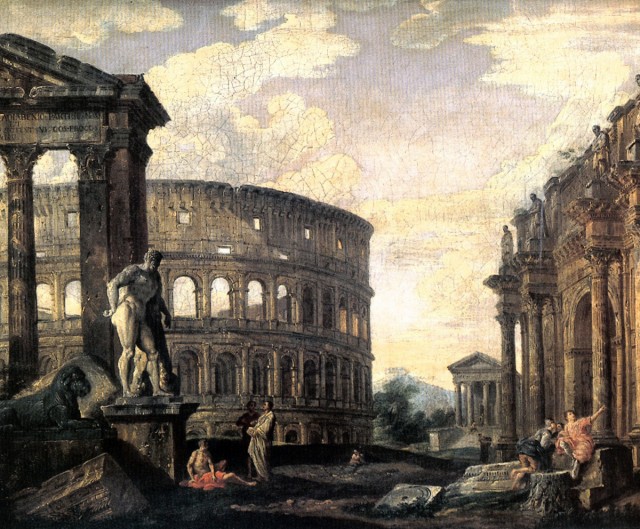 After the Fall Roman Ruins
History

For something to last, knowledge, skills, culture, and enthusiasm must all be maintained through future generations.

If you want to perpetuate human knowledge and human culture, you must do more than just procreate. You must also explain, and you must pass it on. “Because I said so,” doesn’t carry a lot of weight with bright and curious youngsters — especially as they grow bigger and more sophisticated in their thinking. If you want these young alien creatures to become the repositories of future human wisdom and progress, you must swallow your impatience and sense of urgency and give them something they can make their own, take with them and use in the future. Something more than mere command and dictate.

One Approach to Explanation:

State it: Clearly and succinctly state the concept or idea in a single sentence or two.
Elaborate: Explain it further in your own words.
Exemplify: Provide concrete examples and counter examples of the concept.
Illustrate: Provide a picture, diagram, metaphor or analogy of the concept.

Everyone has large gaps in their knowledge and experience. Smart people admit these gaps and are on a constant lookout for them. The quickest way to find gaps in one’s own knowledge is to try to explain something to someone who doesn’t know much about the topic. It is important to match your level of explanatory detail to the situation and person at hand.

If you’re in doubt about what your listener already knows or comprehends, simply ask. As you start to explain, he suggests, ask questions like “Do you already get this?” or “Is this making any sense?” __ Source

Give the person plenty of time to reveal their own understanding of the topic — do not try to cram it down their throats. They may give you the perfect jumping off point.

When we’re speaking about a subject we’re very knowledgeable about, we may tend to be carried away with the impulse to get everything “right.” Sometimes, though, an emphasis on the facts can occur at the expense of comprehension.

“It’s better to come up with a simpler explanation that maybe isn’t completely technically correct but it gets the point across,” Walliman says. Settle for establishing a basic understanding in them. If they want to know more, you can build upon that knowledge and create a more complete — and accurate — picture. __ TED

Be a Teacher and Not a Brainwasher

It seems that a plague of imposters have taken control of schools, from Kindergarten through University. These people do not teach children to think and learn for themselves — but instead work hard to indoctrinate students into a specific outlook. The same gang of brainwashers can be found across the spectrum in news & entertainment media, in government and non-governmental entities, and in corporate offices around the world. There are already enough brainwashers, and you do not want to be one of them — else you would never be reading this in the first place.

When you are teaching a young person, consider the following:

Your children are not your children.
They are the sons and daughters of Life’s longing for itself.
They come through you but not from you,
And though they are with you yet they belong not to you.
You may give them your love but not your thoughts,
For they have their own thoughts.
You may house their bodies but not their souls,
For their souls dwell in the house of tomorrow, which you cannot visit, not even in your dreams.
You may strive to be like them, but seek not to make them like you.
For life goes not backward nor tarries with yesterday.
You are the bows from which your children as living arrows are sent forth. __ The Prophet

The message is true whether the young person in question is your child, your grandchild, your student, or just a young friend you are privileged to know. They are on a grand adventure that you can only share in the most limited way. But you can use your own knowledge and experience to help them prepare.

Lord of the Flies Anarchy in Seattle

This is what happens when people procreate, but neglect to teach their children anything useful for the future:

During five undercover days and nights in the zone, I witnessed a continuing experiment in anarchy, chaos and brute-force criminality. In order to avoid being exposed as a journalist — several reporters have been barred or expelled — I slept and showered outside the zone. (Those inside have no showers but they do have portable bathrooms.) I took meals, and most of my water breaks, elsewhere because I was reluctant to remove my mask and risk being recognized. Every day I entered the zone twice through its semi-porous borders — once in the early afternoon, and again after sundown, staying until the wee hours.

… On Saturday morning, a shooting erupted that left at least one person dead and another injured near a border checkpoint. Police were reportedly met with resistance when they tried to get to the victims, who apparently were then taken in private cars to the hospital. Cops made it into the zone to gather shell casings and evidence, some reports said, as police in riot gear stood at the border.

On Thursday, police arrested Robert James after he left the CHAZ. He is accused of sexually assaulting a deaf woman who was lured inside a tent. The same day, former city council candidate Isaiah Willoughby was arrested on suspicion of starting the arson attack on the East Precinct on June 12.

Police Chief Carmen Best has stated that police response times to 911 calls in the surrounding area have “more than tripled” because the force is down a station. __ Andy Ngo via Source

What kind of a future do you think Seattle has, if it continues under this kind of leadership? I suspect that the city will fill up with people who are attracted to decay and decline.

Minneapolis, New York City, and Chicago are not so far behind on the same path as Seattle. Not coincidentally, all of these distressed cities follow similar ideologies of governance — catering to undisciplined mind-children of any stripe, to the detriment of persons who might wish to build an expansive and abundant future.

Other than voting and otherwise participating in the political process, most of us are limited in how we can counteract this broad cultural current of decline that emanates from school systems, government agencies, news & entertainment media, foundations, and corporations.

But you can take care that young people under your influence are provided with the type of education — full of clear explanation and example — that leads them to personal strength and independence, along with a commitment to the good things that last.

14 Ancient Civilizations that Collapsed — Much of the obscure information in the article is unsourced and lacking evidence. But it stimulates the imagination nonetheless.

The Evolution of Civilizations