What is Positronium, and Where Can I Get Some?

Positronium is an atom without a nucleus, an example of an “exotic” atom. At this time, positronium can only be made inside a particle accelerator. It looks like this:

Positronium is composed of an electron, with a negative charge, circling in orbit with a positron, with a positive charge — making what’s effectively an atom without a nucleus (SN: 9/12/07). With just two particles and free from the complexities of a nucleus, positronium is appealingly simple. Its simplicity means it can be used to precisely test the theory of quantum electrodynamics, which explains how electrically charged particles interact…The researchers formed positronium by colliding a beam of positrons with a target, where they met up with electrons. __ https://www.sciencenews.org/article/positronium-energy-levels-exotic-atom-physics

Exotic atoms such as positronium are used in the study of quantum physics, including quantum electrodynamics and quantum chromodynamics.

Of course, what most of you are wanting to know in connection with exotic atoms and exotic matter is: ” Can we use it to make powerful weapons with which to control the world?” And that will take some time. But in secret labs — and not so secret labs — on Earth and orbiting the Earth, scientists are seeking the secrets of exotic atoms, exotic matter, and exotic energy.

You may have thought that nuclear fusion — which is always 10 to 30 years away — is the ultimate futuristic technology. But nuclear fusion is theoretically achievable using conventional atoms and conventional technology, as long as sufficiently advanced materials are developed. Truly futuristic technology such as faster-than-light travel and communications, teleportation, immortality, orders of magnitude higher levels of human intelligence, intergalactic civilizations, and the ability to interact with multiple parallel universes and timelines, will probably require something more. 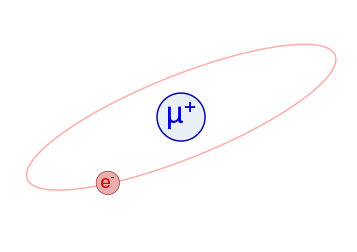 Muonium — Exotic atom made up of an antimuon and an electron

The video lecture below from the UK College of Arts and Sciences provides more background on positronium, muonium, and other atomic physics topics. It is a bit rambling and technical in nature, so if you are interested, be patient.

Muonium, Positronium, Proton Radius, and all that from UK College of Arts & Sciences on Vimeo.

The future is not for wimps and snowflakes or for the type of person who just wants to break things. It is not for people who submit unquestioningly to nonsensical power grabs by government functionaries. To be fit for the future, we must question everything. And pay attention.

Hope for the best, prepare for the worst. It is never too late for a Dangerous Childhood © .

This entry was posted in Future, Science. Bookmark the permalink.

5 Responses to What is Positronium, and Where Can I Get Some?