Sex Differences in the Body and the Brain

Front and side view silhouettes of man and woman. Face and profile human.
Source

In the aggregate, male bodies are different from female bodies. This has proven an inconvenience for feminists and for political activists. But the differences are real. 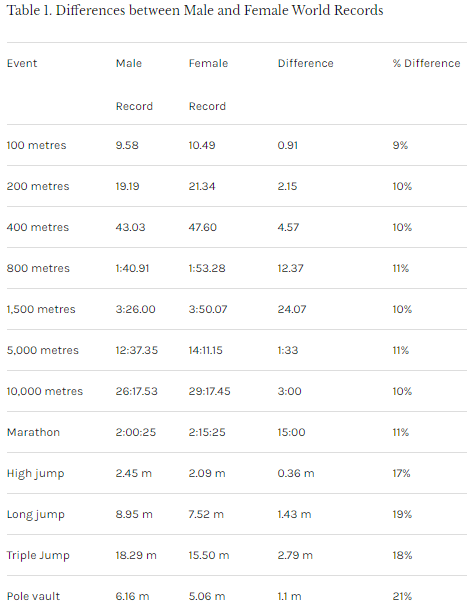 What is it then, that causes these differences? Well, one of the major contributors is the influence of testosterone, with large differences occurring throughout puberty. 11 But even before puberty, there are observed differences in many characteristics including body size and shape, and also in levels of aggression.12 Indeed, it is been highlighted that over 3000 genes contribute just towards muscle differences between men and women. This combination of genetic components and hormones result in many factors each contributing towards the differences that are manifested in males and females. While the effects of testosterone supplementation or inhibition may go some way to modify the original characteristics, it is unlikely to reverse all of the sexually dimorphic manifestations.

Now, knowing the objective data, what does this mean for trans-athletes? The rise in LGBT rights and ideas of inclusion (which are noble aims) has somehow been confused with a misunderstanding of why categorization of athletes is necessary. There has perhaps been an assumption that because gender identity may be accepted as somewhat fluid, then biological sex must also be fluid. But someone’s own perceived gender identity is not the same as biological sex. This is an example of someone’s subjective feelings versus objective reality. And while a person is free to believe whatever they choose, their subjective feelings can never overrule empirical evidence.

It certainly may be apparent that many of the proponents of inclusion and participation are also the same people who dislike the idea of competition in general. Thus, for them the idea of not being allowed to participate in which every category a person wants is terrible. But this is not what most people think about sport and certainly not at the elite level. For example, I would love to be a 100m world champion, yet my physiology would not allow it no matter how much I trained or how much I wanted it. But I don’t feel excluded. We can’t all be capable of doing every single thing in the world, and while we want to remove artificial barriers and enable opportunity and participation, we can’t deny the facts of life.

This is not just about fairness in competition and the potential earnings at stake. While there are many females who make a living in professional sport, there is a perhaps an even larger danger. This could be apparent in boxing and combat sports, where the higher levels of strength and power could lead to devastating consequences. There may be cries here that I am being alarmist and looking at the worst outcomes possible, which are never really going to occur. But we can’t possibly predict the future, and it is naïve to make decisions without thinking through all of the possible consequences. Indeed, some of the outcomes of this have already began to play out. There may be some who say that we just accept it and move forward, but I don’t think that is a forgone conclusion and it certainly requires some serious dialogue and sensible discussion at many levels. __ Sex Differences in Sport

Statistically, men have greater cardiopulmonary capacity, and greater capacity in the blood for supplying oxygen to tissues. The muscles, bones, and sinews of men are stronger on average and faster. Men can carry more weight and take more dynamic punishment while continuing to function under load.

Sex Differences in the Brain

Male brains are larger and they have different patterns of connectivity. Different brain centers are dominant (and are larger) in male brains as compared to female brains. These differences are influenced by gene expression and by differential levels of sex (and other) hormones in the brain.

Differences in Brain Connectivity
from “Smart and Sexy” by Roderick Kaine

… men had higher brain volumes than women in every subcortical region they looked at, including the hippocampus (which plays broad roles in memory and spatial awareness), the amygdala (emotions, memory, and decision-making), striatum (learning, inhibition, and reward-processing), and thalamus (processing and relaying sensory information to other parts of the brain)….

Volumes and cortical thickness between men also tended to vary much more than they did between women, the researchers report this month in a paper posted to the bioRxiv server, which makes articles available before they have been peer reviewed.

That’s intriguing because it lines up with previous work looking at sex and IQ tests. “[That previous study] finds no average difference in intelligence, but males were more variable than females,” Ritchie says. “This is why our finding that male participants’ brains were, in most measures, more variable than female participants’ brains is so interesting. It fits with a lot of other evidence that seems to point toward males being more variable physically and mentally.” __ Sciencemag

Differences in the brains and bodies of the sexes leads directly to differences in occupational preferences and aptitudes. People tend to do what they are good at. There are a few women loggers and pipefitters for example, but you may have look to far and wide to find them.

Another good list of jobs by male vs. female participation rate

Participation in different occupations by sex is a matter of choice and aptitude these days. Political activists in academia and government attempt to concoct a narrative of discrimination, in an attempt to grab ever more control and power over larger numbers of institutions. In the short run they may get their way, but in the long run evolution and human nature will wash over them like a vengeful hurricane-strength wakeup call.

The book Smart and Sexy by Roderick Kaine, is available on Amazon and as a free E-book. It provides hundreds of scientific references along with very strong arguments for the thesis that apparent male and female cognitive and behavioral differences are based upon underlying biological and evolutionary reality.

More — Grown adults pretending that male bodies are the same as female bodies:

Trans activists and their allies like Judge Chatigny are determined that trans persons won’t feel bad. That’s admirable. But “not feeling bad” isn’t a right guaranteed under law. Fairness and equality, ideals that are enshrined in law, should bar athletes with male bodies from competing against those with female bodies.

The whole edifice of American antidiscrimination law, including Title IX, rests on there being a meaningful bodily distinction between the two sexes. Remove that foundation — and the justice of antidiscrimination law crumbles.__
https://nypost.com/2020/05/12/judge-sides-with-trans-athletes-against-girls-who-just-want-fairness/

2 Responses to Sex Differences in the Body and the Brain