Well-intentioned people fought long and hard to assure equal opportunity for all citizens and legal residents. But when equal opportunity was finally achieved, the outcomes still did not equal out. This presented a difficult choice — whether to expose the deep and true reasons for these discrepancies of outcome (IQ and EF), or to take the cheap and easy way out and blame “white privilege”.

On average, different population groups in society achieve different levels of success at different rates. In an opportunity society such as the United States, this stratification by achievement exposes the association between intelligence — as measured by IQ — and life success.

IQ by Region and/or Ethnicity

There are outliers, of course. As a whole, Indians have an average IQ of 82.2. But Indian-Americans have a median income of $100,547, probably due to selective immigration policies. (The 287 million illiterate adults in India are not the ones filling out immigration paperwork and now working high-tech jobs in the U.S.)

These data obviously don’t mean there are no Asians with low IQs or blacks with high IQs. Lumping people into a group and judging them based solely on skin color is the definition of racism, and everyone should be judged as an individual. What it does mean, though, is that it’s possible to build statistical models of what will happen to America or other Western countries if current immigration rates continue.__ Source

IQ data above based upon Lynn and Vanhanen.

American universities twist themselves into tangled knots in the attempt to achieve “diversity” of ethnicity, while neglecting the far more important diversity of thought. As a result, failure rates of minority students in universities is high. Lifelong indebtedness and the stigma of failure are the result of “good intentions with unintended consequences.”

Example, UC Berkeley before being banned from using race as a criterion for admission:

University of California, Berkeley, 1995
Berkeley Enrollee Median Verbal Scores, 1995
• Blacks, 450
• Hispanics, 480
• Asians, 590
• Whites, 600
There was a 150-point difference in median verbal scores between whites and blacks and a 120-point difference between Hispanics and whites. The Asian-white gap was 10 points.
Berkeley Enrollee Median Math Scores, 1995
• Blacks, 510
• Hispanics, 560
• Asians, 710
• Whites, 690
The math score gap was even larger—180 points between whites and blacks and 130 points between whites and Hispanics. The Asian-white math gap was 20 points, favoring Asians.
Berkeley Enrollee Median GPAs, 1995
• Blacks, 3.42
• Hispanics, 3.75
• Asians, 4.00
• Whites, 4.00
Black and Hispanic enrollees had lower high school GPAs compared to whites and Asians. The white-black gap was roughly six-tenths of a point, while the white-Hispanic gap was a quarter of a point. Asian and white median GPAs were the same. __ http://www.ceousa.org/attachments/article/1374/California%20Project.Final-Embargoed_9-9-20.pdf

UC Berkeley’s preferential treatment toward black and hispanic candidates for admission prior to the race criterion ban, is still typical of universities outside of California that are not subject to such a ban. The state of California is now trying to eliminate the race-neutral policy, in the attempt to reinstate a policy of “reverse discrimination” against higher IQ whites and Asians.

Admitting higher levels of minorities makes university administrations look good, but it dooms many minority students to failure when they are admitted to schools and programs which are too difficult for their aptitudes and preparation.

In the famous Isle of Wight study, for instance, all five year olds on the island were IQ tested, that is, before they even went to school. Their final school grades at the age of sixteen years were predicted very accurately by their IQ, and when the IQ was reassessed at the same time, it had changed very little. In other words, IQ predicts achievement, it is not something you are taught at school. Similarly, IQ predicts success at university, law school, medical college, or indeed any advanced teaching unit more successfully than anything else, including interviews or special exami­nations. Within a given job, occupation or profession, IQ almost in­variably correlates with performance. __ Intelligence: A New Look by Hans Eysenck

More on IQ and Success from Data in Non-Hispanic Whites:

Mid-range IQs have the most likelihood of being married before age 30. Those with high IQs (above 125) are less likely to be married by age 30 those with the lowest IQs.

White men with the highest IQs are the least likely to be incarcerated (0 percent), but for IQs under 75 it jumps to 7 percent.

Richard J. Herrnstein and Charles Murray, authors of The Bell Curve, devised a Middle Class Values Index that ranks a person’s likelihood of having a stereotypical middle class life, such as graduating from high school, not being incarcerated, being married to one’s first spouse, being in the labor force (for men), and not having a child out of wedlock (for women). The lower the IQ, the less likely someone is to live such values: 16 percent for under 75 IQ; 30 percent for IQs from 75-90; 50 percent for IQs 90-100; 67 percent for IQs 110-125; and 74 percent of those with IQs above 125 have these middle-class values.

In addition, IQ scores are the best predictor of whether people will be economically successful in Western society. __ Source

There is good evidence that children born to unmarried parents are at higher risk of dropping out of high school, having run-ins with the law, and other negative social outcomes.
https://www.washingtonexaminer.com/77-black-births-to-single-moms-49-for-hispanic-immigrants

Group average IQs correlate with rates of illegitimacy in the US, and with rates of crime and government dependency in those groups. Exacerbating the problem, government policy rewards out of wedlock births, and a decadent popular culture programs degenerate behaviors into young people which leads to lower rates of marriage and higher rates of illegitimacy. This has been true for a number of decades now in the popular entertainment industry. What is shocking is that this degenerate programming and indoctrination is now an official part of government school and typical university curricula.

White privilege is the same as Asian privilege — or even Igbo privilege. It is the privilege of being born with a higher IQ, with better EF (executive functions), and into a family environment where there are more books, higher levels of conversation, and more care is taken to provide consistently good nutrition for growing children.

If parents can give the gift of intelligence, a good upbringing, and wise habits to their children, they will give them all the privilege they will need in an opportunity society that has not been destroyed by socialism.

Different breeding groups evolved different sets of alleles contributing to overall intelligence. That is why there is such a broad range of average IQs for different breeding populations. Only an opportunity society — not socialism — can create the broad number of economic niches to suit this evolutionary diversity that is innate in the human race. 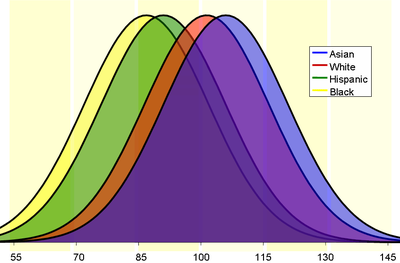 More: A lower IQ is one thing. But no one forces black people to act this way

This entry was posted in Competence, IQ, University and tagged race. Bookmark the permalink.