Credits borrowed and modified from IMDB

The classic Western film High Noon, released in 1952, offers a compelling analogy to the Trump presidency. Set in New Mexico territory sometime in the late 1800s, it starred Gary Cooper as Marshal Will Kane and Grace Kelly as Amy. Her character is a Quaker. She had seen her brothers and father die by gunfire, so she is a pacifist. The two of them marry in the first moments of the film but then learn that a man the marshal had sentenced to hang, but was released by an early version of an Obama-appointed judge, is coming to their town with three henchmen to kill Kane. The marshal and his new wife quickly leave to seek the life they’ve planned, but he soon turns around in a crisis of conscience, realizing that if he runs from this man, Frank Miller, he will always be running. He returns to Hadleyville and attempts to deputize other men in the town to help him face off the murderers.

But not one of the townsmen will agree to help. They are all cowards (Republicans) in fear of their lives, or they are friends and admirers of the outlaw Frank Miller and want to welcome him back to the town (Democrats). Bottom line? Not one man will stand with Kane or defend the peace and safety he has brought to their town. All the men he’s tried to recruit only want Kane to leave; they think if he’s not there, there will be no trouble, rather like those who want to dispense with ICE, DHS, and the police. No law enforcement, no crime. Sure. We all know how that goes. Like The Magnificent Seven, this film, too, proves the age-old truth that submission to evil brings only violence and grief. It is generally “toxic” masculinity that saves the day.

“People gotta talk themselves into law and order before they do anything about it. Maybe because down deep they don’t care. They just don’t care.” This line is spoken by Kane’s mentor, who is too old to help. That pretty much sums up our Left today. They refuse to approve border security, and they above all want to protect criminal illegal migrants, no matter the cost to our citizens. They don’t care about the horrific consequences of open borders. The men in the film are merely cowards. Our Democrats and silent Republicans are worse than cowards. __Source

Sadly, there are no roles in the film ridiculous enough to cast Hunter Biden. The fruit does not fall far from the tree.

And so when it comes to the showdown between the enemies of western civilization against the lone holdouts defending the worth of the individual to build his own life, you will need to choose sides. The enemies of civilization are not really out to get Donald Trump. They are out to get anyone who opposes the groupthinking juggernaut controlling the deep state, the media, academia, and the corporatist elements of the regional and globalist swamps. 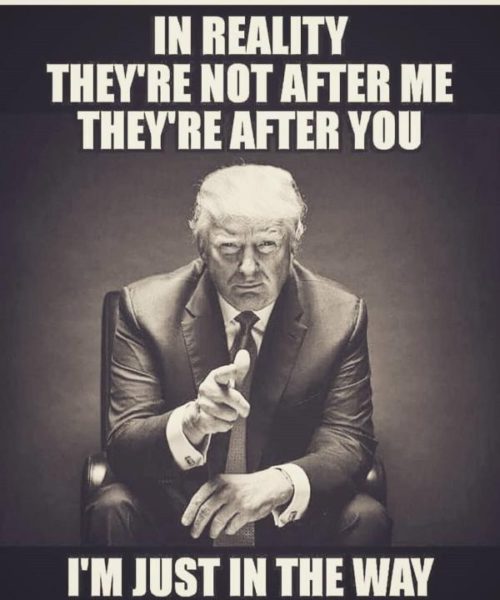 The massed swamps of the world appear united behind the corrupt ideologies of Communist China, North Korea, Revolutionary Islamic Iran, Communist Cuba and Venezuela, and Putin’s Russian mafia state. Together with globalist and Nazi collaborator George Soros, they all want a piece of the American Pie. And they can only have that if they eliminate everyone who stands in their way. Using voter fraud in support of a demented Democratic Party puppet candidate, this is exactly what they intend to do.

Expect riots if they win, and riots if they lose. It is a question of where the riots will be directed by the financiers of chaos. Like the Bolsheviks, these people cannot accept any opposition to their top-down goose-stepping ideology. Try not to get caught behind the 8 ball.

Democrat Party operatives have begun their election fraud campaign, destroying military ballots and absentee ballots. There is a reason why civilized countries require in-person voting, with picture ID. It is too easy to cheat the Democratic Party way.

Many consider the group Democracy Alliance (DA) the place to start ferreting out how funds are utilized to promote unrest. DA is a George Soros-founded organization that is a consortium of heavy-hitting leftist and progressive-minded donors. In 2016 they had Black Lives Matter in their quiver to supply resources. One can perform a simple internet search and find hundreds of organizations – one or several for nearly every state – to assist in bailing out rioters and protesters. Candidate Joe Biden’s staffers have contributed to the Minnesota Freedom Fund to help the rioters who damn near burned Minneapolis to the ground.

The problem is that someone or something – buried beneath layers of community organizations – is coordinating and funding the infiltration of cities for the opportunity to cause physical and psychological harm. And no one seems to want to dig too deep – until now. __ Financers of Chaos

Princeton U. researchers found that BLM was behind over 500 riots so far. And all of those riots based upon a false premise.

Democracy Alliance is a George Soros-led group, populated by big trial lawyers and corporatist kingpins supporting the Democratic Party. They are uncultured trash, and they want everything that you own. Very little stands in the way of their violent crusade.

The Chinese SARS CoV-2 from Wuhan is a serious virus, almost certainly human-modified by Chinese virologists. It is worse than most seasonal flu, but not as bad as the very worst influenza. For that, we are lucky that the Chinese were not really trying to destroy the world, “it just happened” . . . as people of loose standards often say.