Even in Gas-Rich USA, Nuclear Energy is the Future

Nuclear demand is high where air pollution is at its worst and where economic activity is fast and furious — in Asia generally, and in China and India in particular… China and India are building half of the 60 new reactors under construction worldwide, according to Andrew Paterson of Verdigris Capital Group, which studies nuclear. __ Inside Sources

Populous Asian nations China and India are currently leading in the global race to install new nuclear power plants. Japan is in the middle of restarting its nuclear plants after a temporary post-Fukushima shutdown for maintenance and upgrades. US nuclear construction is currently stalled while its abundant deposits of cheap natural gas are being utilised for electric power generation. And most of Europe is fearfully retreating from nuclear power, even while it eagerly welcomes a much greater threat in the form of human time bombs from the third world.

Despite the temporary slowdown of new US nuclear power plant construction, in the long run there is no substitute for nuclear energy in a modern and prosperous society. In a free society, technology development never stops.

The United States is on the frontier, pioneering a generation of wholly new reactor concepts, mostly for small modular reactors and even big new reactors.

We know that big wind and big solar are unreliable and intermittent. Now we should also understand that there is no such thing as affordable big wind and solar. And there never will be, no matter how good batteries eventually become.

Eventually the supplies of oil, gas, coal, and other hydrocarbons will become too expensive to burn. Whether that deadline occurs in ten years or two hundred years, improvements in nuclear reactor design will continue to be made. Newer reactors are becoming safer, cleaner, more efficient, more affordable, more reliable, better at “load following,” more versatile for CHP (combined heat and power), and more scalable. Within the next few decades — even if hydrocarbon fuels remain abundant — advancing nuclear technologies will gradually crowd older technologies out of most power applications.

The average wind turbine you see along the highway turns out 2 megawatts of electricity when there is wind, a trifling amount compared to the 1,600 megawatts a new nuclear plant produces continuously — and probably will produce for 100 years before it is retired.

Asia, choking on air pollution and with huge growth, needs nuclear. America is not gasping for new generation: demand is static and there is a natural gas glut… But U.S. nuclear creativity, even genius, will not rest. The United States is on the frontier, pioneering a generation of wholly new reactor concepts, mostly for small modular reactors and even big new reactors, which may first be built in China and India but, like so much else, will be “thought up in America.” __ http://www.insidesources.com/nuclear-booms-asia-new-reactor-ideas-flourish-u-s/

The following table from Wikipedia (Specific Energy) reveals why nuclear fission and fusion will power advanced human societies on Earth and beyond, for tens and hundreds of thousands of years:

Nuclear fission and fusion have the capacity to cleanly power advanced human societies into the indefinite future — on planet and off.

New nuclear plants are likely to produce high levels of clean, reliable, affordable power for over 100 years. The components in the best wind and solar plants, for example, lose efficiency and begin to break down in less than ten years. The most modern electric storage batteries begin to lose efficiency within a few years.

When contrasted with intermittent and unreliable forms of energy such as wind and solar, nuclear comes out far and away the winner on all counts. By abandoning newer, safer, more efficient nuclear reactors, most of Europe — and California — are walking down a road leading to energy and economic suicide.

The $2.5 trillion scandal you will never read about or hear about in the mainstream skankstream

Paradoxically, new nuclear technologies may help bring about a new age of hydrocarbons. But rather than burning most of them in combustion engines, most will likely be used for other purposes such as plastics, fertilisers, lubricants, and similar higher value commodities requiring organic feedstocks. 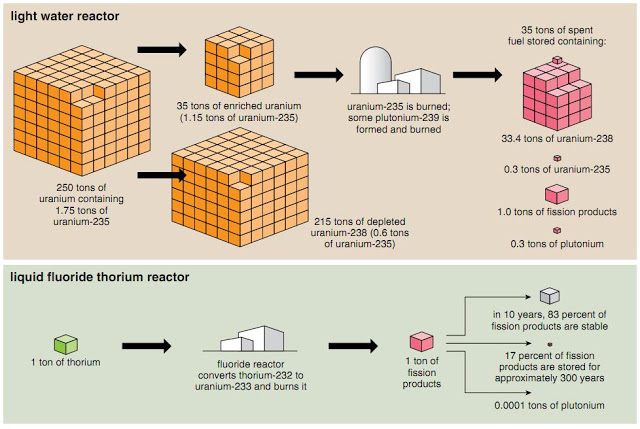 This entry was posted in Energy, Nuclear Power and tagged Nuclear Energy. Bookmark the permalink.

11 Responses to Even in Gas-Rich USA, Nuclear Energy is the Future