Under Cover of Darkness
Source

Warren Buffet, billionaire and major investor in wind energy, has admitted that wind isn’t all that it’s cracked up to be. “The only reason to build them [wind farms]” is the subsidies; “They don’t make sense without” them.

… As with the financial sector, renewables have had a boom led by government intervention and hedging that may ultimately bust as markets can’t efficiently work. This would not only threaten the reliability and price of electricity, but it would also come at the expense of taxpayers.

Yes. Even kindly, grandfatherly Warren Buffet is weakening the foundations of your reality. Not with good intentions — only to make a few more fistfulls of dollars.

Corrupt billionaires are getting richer by risking lives, robbing taxpayers, and victimising the poor.

If power grids go down, entire societies will go down

As the penetration level of asynchronous generation increases this will either increase cost, limit operational flexibility, degrade reliability or most likely result in a combination of all three factors __ Judith Curry.com

Western societies are built upon their critical infrastructure — and all critical infrastructures rely upon electrical power grids. Anything that makes electrical power grids less reliable and more prone to failure creates unacceptable risks to society as a whole. But that is exactly the type of risk that intermittent, unreliable, energy inputs such as big wind and big solar are introducing at increasing scales. 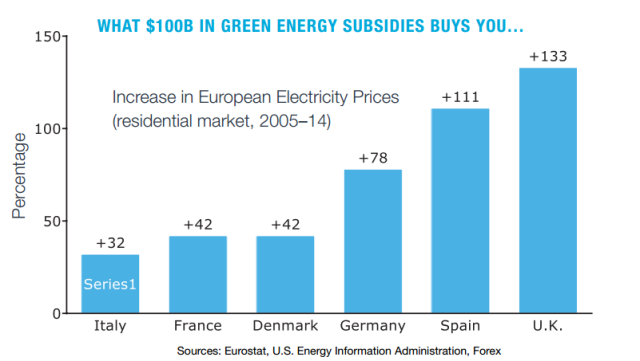 Germany’s energy minister has warned that the continuation of current policies [Energiewende] risks the “deindustrialization” of the country’s economy.

…. in 2016, renewable-energy surcharges will cost the average German household about $721. European countries are seeing big increases in industrial rates, too. During 2005–14, industrial electricity prices in the EU increased by 46 percent, nearly twice the increase seen in the U.S. over the same period. Industrial electricity prices in the U.K. jumped by 133 percent, to 16.6 cents per kilowatt-hour, among the highest rates in the European Union.

Over the same period, industrial rates in Spain jumped by 84 percent, to 15.8 cents per kilowatt-hour.

Since Germany’s wealth depends upon its industrial export sector, a deindustrialised Germany is a dead Germany.

Corrupt billionaires with insider connections are not only putting power grids at risk of failure, they are driving consumer electricity costs to exorbitant, poverty-inducing levels. The billionaire-owned media refuse to discuss this ongoing scandal, although the corrupt and larcenous reality behind the censored con-game is not that hard to ferret out.

The link below provides “a technical and economic analysis of the European electricity system” which clarifies the ongoing tragedy:

Currently, variable RES (wind and solar PV) have priority access to the system, and the volume of production has so far only had a marginal impact on the system. However, the large scale introduction of variable RES will have a marked impact on the structure and operation of the electricity system at all levels. The paper examined the infrastructure requirements (inter-connectors, reinforcements), on existing generators, on the flexibility (storage, stability and demand) and costs/profits in order to accommodate 40% variable RES (wind and solar PV).

As more and more big wind and big solar energy are forced onto the grid — and as more fossil fuel and nuclear plants are removed — the risks of chaotic breakdown grow exponentially.

If you want to learn what’s really going on, you will never find out from reading the New York Times or Washington Post, whose missions in this area are basically to suppress all information that is important to know.

Intelligent persons immediately understand that critical life-or-death power demands must be met instantaneously — at the instant the power is needed. Wind and sun are unreliable, intermittent, squander immense tracts of land, and too often produce energy at the exact times it is NOT needed — energy that must therefore be dumped at additional expense. Backing up unreliable energy generators with more reliable generation — gas, coal, nuclear — is becoming less and less viable for utilities and power producers, given the many perverse government incentive structures.

Energy storage is not the answer due to the enormous tacked-on costs involved which leads to hugely greater costs which must be paid for by someone.

Thanks to insider corruption by green billionaires and politicians such as Obama and Clinton, the focus has been shifted away from the production of high quality, life-saving, prosperity promoting reliable power — toward stuffing the pocketbooks of political insiders in the name of climate apocalypse. Much is being risked for no good reason.

Since July 2010 we have been exposing the fact that the big green deals involve cronies, collusion and tons of taxpayer cash. We have unleashed a treasure trove of evidence to back up this claim, which stems from over six years of extensive research. This also included ongoing House Oversight reports, and hearings; Department of Energy (DOE) internal emails; Energy and Commerce Committee Reports, Inspector General reports; Whistle blower Intel as well as 2012 Revelations (57-page, “Sensitive & Confidential” memo) that revealed the real intent behind Obama’s trillion-dollar spending spree, of which $100 billion was earmarked for green energy.

We’ve analyzed various publications and non partisan studies covering the topic and so much more –– all leading to the conclusion that President Obama’s green energy revolution and radical climate change agenda is a Big Green Heist: the largest, most expensive and deceptive case of crony capitalism in American History.

After months of digging, I found tons more. Thus my final chapter will be devoted to proving beyond a reasonable doubt that the Democrat presumptive presidential nominee, Hillary Rodham Clinton, is not on only in bed with Big Money (Wall Street, the Uber-Rich, special interests groups and lobbyists) Dark Money (Super PACS and Secret Cash), she’s also bankrolled and in cahoots with –– directly and through her husband and her family foundation –– the wealthy Green Gangsters, who are robbing U.S. taxpayers in order to “save the planet.” __
http://greencorruption.blogspot.com/

Who are the guilty billionaires who are pushing societies to the brink of critical infrastructure failure?

Make no mistake. The billionaires listed — and thousands more who promote and benefit from the green degradation of modern power grids — are guilty of conspiring to weaken the foundations of life for billions of people. Some of them are merely greedy and corrupt fools who rake in government handouts or bask in the self righteousness of destructive and incompetent fools. Others are fully conscious of what they are doing and will be directly responsible for any catastrophes that result from their well planned actions.

“By one estimate, should the power go out and stay out for over a year, nine out of 10 Americans would likely perish,” said Frank Gaffney, founder and president of the Center for Security Policy in Washington. __ Source

Important Note: No green billionaires were killed in the writing of this blog posting.

French-style wind energy corruption and incompetence flows into Texas (Background)
Texas taxpayers need to take a close look at financial ties between politicians and EDF executives and board members.

Big wind and solar are the kiss of death. Wishful thinking and a sense of self-righteous arrogance cannot save you when too much unreliable intermittent energy causes your grid to crack and fail

Energy policy determines the life and death of society — and it is in the hands of brainwashed children and fanatical ideologues.

Renewables to cause blackouts in Australia