Why Blacks Destroy Everything They Inherit

… no one will talk about the painful fact that most African and Caribbean nations have either failed or are about to collapse. __ Source

From South Africa to Zimbabwe to Jamaica to Detroit to much of London, African blacks are destroying their inheritances for the lack of ability to manage and maintain complex infrastructures. Why does this happen? 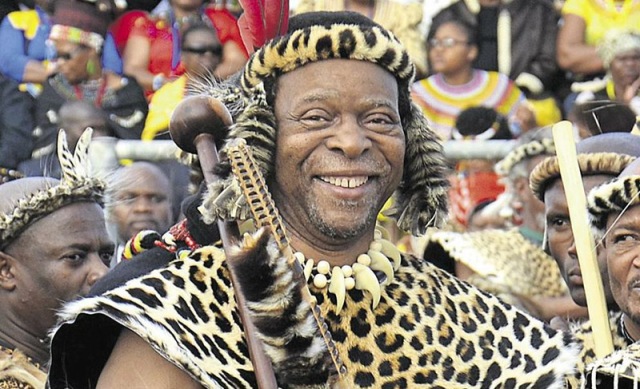 Zulu King Goodwill Zwelethini
“History will judge black people harshly as they have failed to build on the successes of the Afrikaners,” he said, before continuing to explain that “black people loved to use matches to burn down infrastructure” built by the white government.
Source

King of the Zulus, Goodwill Zwelethini, despairs of how South African blacks have done nothing but destroy the once impressive infrastructure built by white South African immigrants and their descendants. But on the larger world stage, no one will talk about how there are no successful black-led countries in the entire world.

… it is no surprise that in the absence of any healthy black nation — in the midst of chaos, senseless wars, corrupted religiosity, violence, and economic collapse — African and Caribbean people leave home en masse. They beg on the streets of Greece, prostitute in the red-light zones of the Netherlands, and make up 40 percent of the migrants flocking to Europe. As they turn up in these countries, helpless, unwanted, starved, or maimed, they are treated like dogs. … Everywhere from Ukraine to India, nearly every day, black indignity, black helplessness, stares us in the face. And all we do, we who hold the platform can do, is scream “racism!” and court the sympathy of others. __ Chigozi Obioma in Foreign Policy

Why is it that Africans can never seem to rule themselves, or build a successful nation — or even a city? When blacks emigrate to the west they bring their dysfunction, poverty, underachievement, violence, and angry victimhood with them.

More than 2/3 s of the world’s poorest nations are located in sub Saharan Africa or are populated by people of African descent. Africa and African-populated nations are at the forefront of global corruption, violence, poverty, instability — and fertility.

Blacks who get jobs thanks to Affirmative Action, almost never carry out their duties with the same level of competence as the whites who came before them. I see this day after day, repeating itself thousands of times over – and not just in South Africa today. This has been going on in lots of other African countries. And it is clear that the problem is not with white people – the problem is with the blacks themselves. But how many black people are willing to admit it?

African descended blacks have little or no basis for pride or sense of achievement. As long as they beg, harangue, and demand that others do everything for them, this will continue to be the case.

“As soon as we have problems, we ask someone else to take care of them for us,” Isaac continued. “We ask the Europeans. We ask the Americans. We ask the Chinese. We will run this train into the ground, and then we will tell the Chinese we need another one. This is not development.” I thought of the wreckage by the tracks. In China, there is no such thing as metallic waste. Armies of migrant workers scour the countryside with hammers and chisels, collecting and selling every scrap to the insatiable smelters that feed the country’s industries. Here, by contrast, was a land without industry. __ Atlantic

Power outages were not a problem before majority rule swept over South Africa like a dysfunctional flood. But now they are commonplace, like over most of the rest of the devastated dark continent.

White rule in South Africa ended in 1994. It was about ten years later that power outages began, which eventually reached crisis proportions. The principle reason for this is simply lack of maintenance on the generating equipment. Maintenance is future-oriented, and the Zulu entry in the dictionary for it is ondla, which means: “1. Nourish, rear; bring up; 2. Keep an eye on; watch (your crop).” In short, there is no such thing as maintenance in Zulu thought, and it would be hard to argue that this is wholly unrelated to the fact that when people throughout Africa say “nothing works,” it is only [a slight] exaggeration.
__ How Africans Differ from Westerners

The article linked above describes how Africans typically have no concept of obligation, or maintenance. Lacking the concepts, they are never expected to follow through with the necessary work required to keep machinery working, to show up to work on time, or to support a family. These same failures one sees in native Africans have somehow transplanted themselves into African immigrants in Europe, North America, and elsewhere. More

Average IQs in sub Saharan African blacks range between 60 and 80, depending on the methods of measurement. The most repeatable estimates centre on an average IQ of 70 to 75 for African blacks. Whether this low level of average intelligence is mostly due to inheritance or to environmental factors remains to be completely proven. This cannot be done for reasons of political correctness. But measurements of the African diaspora to western countries suggests that black African average IQs will remain at least 1 standard deviation below those of Europeans and East Asians, regardless of the quality of education, nutrition, and intellectual enrichment provided.

Average intelligence tells us much less than the distributions at the upper and lower ends of the curve. It is at the upper end of the IQ curve where one finds Nobel Prize winners and the great innovators and managers in their fields. As you can see from the curve above, one finds almost no black Africans at extreme upper levels of IQ, and very few diaspora blacks. It is at the lower end of the IQ curve where one finds those unable to cope with ordinary mental challenge and responsibility. African populations have high numbers of these, who tend to burden social systems and law enforcement agencies to the breaking point.

At the same time, being overburdened by large numbers of dependent — but very fertile — adults reduces productivity and increases poverty to untenable levels.

In truth, Africans have little hope that things will change for the better, on their own. African hopes generally rest on outsiders, from the Chinese to the Indians to the Europeans and so on.

On the scales of violence, intelligence, corruption, rule of law, disease rates, life expectancy, poverty, and almost any other measure of nation against nation, black African states show themselves in a bad light.

A World of Crime
http://chartsbin.com/view/1454

Personality traits such as impulse control and conscientiousness may be better predictors of neglect and decline than any measures of ethnicity or nationality. If these traits vary statistically between members of various ethnicities and different nationalities, they may in fact be responsible for much of the statistical difference in achievement, violence, savings, and decline that is seen between various countries and various population groups within any given country.

As we get better at measuring different personality traits (and executive functions) reliably, it will be easier to stratify out particular subgroups from the larger groups, and perhaps trace evolutionary lineages of traits (extracting genotype from phenotype).

Doing the same thing for IQ — which can be measured far more reliably at this time — would be similarly helpful, if it were not so politically incorrect as to make such a project almost impossible at this time. Political correctness is the enemy of truth, and thus the enemy of the future.

Black Africa is not the only part of the world that is squandering its inheritance and destroying its conquests, of course.

“There are no hopes,” says Alexei Levinson, the lead researcher of the Levada Center. “If there are hopes, they are meaningless, not so different from despair. Social conscience is equally — and simultaneously — ready to feel both.”

The future is perceived as “murky, deformed, inspiring fear,” wrote Denis Volkov, also from the Levada Center, in the Vedomosti newspaper on Aug. 8. One might take that thought a step further: In today’s Russia, there is only one thing that unites — or, to put it more accurately — fragments the whole nation. It is the lack of any vision of the future, shared by everyone, with no exception. __ No Hope in Russia

We have pointed out such eerie parallels between Africa and Russia in the past. No doubt they will continue to pop up due to the strange ties that link the two large land masses and the psychologies of their people.

This entry was posted in Africa, Blacks and crime and tagged Africa, Russia_Africa. Bookmark the permalink.

2 Responses to Why Blacks Destroy Everything They Inherit