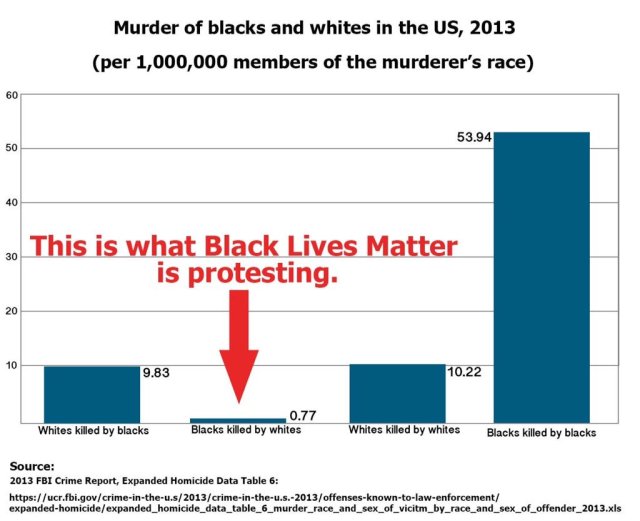 Vengeful black mobs roam the streets of Charlotte, North Carolina, and other North American cities, killing, looting, raping, in the name of an imaginary genocide. The real colour of crime is of a different hue than is claimed by the mobs and than what is highlighted by the media.

Venezuelan oil workers are starving as the country’s production shrinks. Few things are breaking Caracas’ way these days, but its struggles to keep pumping oil, its most important resource, are undoubtedly at the very top of President Maduro’s list of concerns. As the NYT reports, the petrostate’s faltering oil production is compounding Venezuela’s many other economic difficulties… __ Source

In oil-rich Venezuela, “peak oil” is a reality. But it is political peak oil, caused by policies of socialist government.

Political peak oil, the only kind of peak oil you are likely to see — other than peak oil demand.

China’s government is digging its economy into a deeper hole, then covering itself with a mountain of debt. A huge, lucrative industry of organ transplant has been built on the corpses of political and religious dissidents. China’s elite and their capital are making their way to safer destinations, well away from the increasingly toxic Middle Kingdom.

Every now and then you are dragged from your filthy, overcrowded cell into a room where, without warning, needles are jabbed into your arm and blood is drawn into as many vials as it can fill.

Then prison authorities instruct a group of drug-addicted criminals to use violence to restrain you as you are made to give a urine sample and subjected to invasive medical procedures.

“I was placed in a room where the rest of the occupants were all drug offenders,” Liu told news.com.au.

Europe’s rape crisis spirals out of control in Germany, in Sweden, and across the continent wherever third world immigrants are welcomed and supported by government handouts.

Europe has lost her way, and has fallen into a downward political and economic spiral from which she seems to be reluctant to try to escape. Instead, she lashes out at fellow Europeans who try to stop the downward slide, and strikes at allies who may represent Europe’s last chance to survive. All the while she opens her doors to young angry men who hate the prosperity of Europe, the freedoms of Europe, and most of all, the beauty of Europe which they feel compelled to rape and destroy.

Africa is undergoing a population expansion of epic dimension

The population in Africa is rapidly expanding, and by 2060 the region will hold an estimated 2.8 billion people. __ http://www.worldbank.org/en/region/afr/publication/africas-demographic-transition

But Africa is not expanding on its own merits, or by the efforts of its own people. Africa’s population is rapidly expanding thanks to outside medical, financial, humanitarian, and commercial assistance and investments — which are by no means guaranteed to last into the future.

The low innate IQ of sub Saharan African native peoples reveals what most people in government, academia, and media wish to remain hidden — as populations of “competent assisters” in Europe and the Anglosphere drop, populations of those who need assistance is exploding. The outside help that underlies the unsustainable explosion of black African populations is shifting away from Europe and the Anglosphere to China and India. This will change everything.

Russia’s political regime is unsustainable and lacks capacity to reform in the face of economic turmoil. __ ECFR

Ever since Russia’s quiet conquest of Crimea and its ongoing ugly wars in Ukraine, Syria, etc., Russia’s already crumbling infrastructure has accelerated its rapid decline. Russia’s schools, hospitals, clinics, housing, energy pipelines, roads, bridges, and the rest of its mostly-Soviet-era infrastructure is collapsing under Putin’s feet. But he only has eyes and funding for foreign wars, conquests, and domestic tyranny.

“Russian authorities are forced to make budget cuts in real terms, affecting almost all areas of the budget, including defense spending,” Guriyev said. “[There is even] currently discussion of large-scale reduction of the state program of armaments modernization” — a multibillion-dollar plan to overhaul much of the military by 2020.

… “In this scenario, the Reserve Fund will be exhausted later this year or in the first half of next year,” he said. “The consequences are that the government will be forced to start spending the National Welfare Fund.”

… prospects for economic recovery continue to be dimmed not only by low oil prices and sanctions but by a lack of new investment. Domestic capital has shrunk with the economic slowdown and foreign investors have largely fled the country since relations between Moscow and the West soured over Russia’s interference in Ukraine. __ http://www.rferl.org/content/russia-economist-guriyev-interview-stagnation/28005119.html

Under Putin, Russia is once again haunted by the spectre of disintegration.

Russia will face a major crisis by 2020. With a declining economy and limited options to address rising social problems, vulnerabilities for Putin will increase. The fundamentals of Russian geopolitics indicate that he must keep Russia united. He sees controlling security structures as key for keeping the country unified and under his rule. At the same time, as his power and the economy weaken, unpredictability will rise for Russia, especially in key strategic borderland regions like Ukraine, the Caucasus and the Black Sea. __ Geopolitical Futures

Long daily Soviet-style lines form in Russian stores once again. Putin thrusts long-suffering nation into extended economic stagnation, as national morale sinks ever lower. Putin is no one’s champion but his own.

Realities Across the Islamic World

Samuel Huntington pointed out that Islam has bloody borders. Even highly placed Muslims sometimes bemoan Islam’s predisposition to bloody violence at every turn.

This curse of violence appears to be built into the religion itself, and has plagued Islam since its founding, with a constant war against the outside, along with an eternal war within Islam itelf. For the most part, the violence has centred on the Arabian lands of the fertile crescent, the peninsula, and North Africa. But lately the blood-letting is expanding into Central Asia, sub Saharan Africa, Southeast Asia, the Caucases, and into Europe and the Anglosphere.

The best way to see Islam is as a loosely organised mob of violent musim men and women aiming to subjugate the world under a banner of totalitarian religion — all the while killing other muslims as the mood strikes.

Muslims typically have population IQ averages that are quite low — revealing a lack of potential for any future productivity or prosperity. When you think of Islam, think violence and progressive decline.

Latin America is not a unified bloc. It is a grab-bag of peoples, political and economic systems, and conflicting traditions going back millenia. The places where the people suffer the most are the places where socialism’s grip has been the strongest, and where alliances with China and Russia are the strongest.

Other nations such as Mexico, Chile, and an Argentina trying to recover from a recent socialist past, sometimes choose to strengthen economic and political ties with the west, and reap the rewards of their own efforts and resources as a result.

Demography is destiny. Countries and regions that are losing the demographic struggle include Japan, most of western Europe, Russia, South Korea, most of the Anglosphere, and other, scattered nations and city-states.

If one is careful, he will not be fooled by statistics that conflate fertility and births of third world immigrants with births of native, high IQ peoples. Populations of young, healthy, high-IQ peoples represent a much larger promise of future production, innovation, and accomplishment than do large populations of young, uneducable, violent, low-IQ peoples.

The end consequences of such cascading effects are unpredictable. One such effect that has already been detected in world economic data is a slowdown in economic activity and production in Japan and certain nations of Europe where economic decline has been most pronounced.

Reality: Governments that Promote Achievement, Innovation, and Productivity Give the People the Best Chance

The western world has been swamped for many decades by policies of redistribution from the productive and innovative to the non-productive and dull. By rewarding failure and punishing success, western governments of Europe and the Anglosphere have made it difficult for their middle classes to marry and build families that are capable of feeding into future prosperity, innovation, and achievement.

In the 2016 US elections, Hillary Clinton champions this grand tradition of redistribution, as has Barack Obama throughout his presidency. Donald Trump is something of an enigma, to this point, in terms of the policies which his administration would actually promote. The libertarian and green socialist tickets both seem to be dedicated to incomptence, self-destruction, and irrelevancy, to all outward appearances.

The climate apocalypse cult has captured full control of several governments in Europe and the Anglosphere, and of the US Democratic Party machine and auxiliary operatives who control most of media and academia. According to the cult, we should all be dead by now:

Back in the late 1980s, the UN claimed that if global warming were not checked by 2000, rising sea levels would wash entire counties away. Four years ago, Peter Wadhams, professor of ocean physics at the University of Cambridge, predicted “global disaster” from the demise of Arctic sea ice—in four years. He too, is eating crow.

There is some levity in all this charade. In 2009, then-British Prime Minister Gordon Brown predicted that the world had only 50 days to save the planet from global warming. But fifty days and years later, and the earth still spins. __ http://www.forbes.com/sites/robertbradley/2016/09/23/climate-exaggeration-is-backfiring/print/

In the US, race-baiters and election fraudsters are out in force — particularly in big-city precincts of swing states. Hold onto your hats.

Hope for the best, prepare for the worst. It is never too late to have a Dangerous Childhood. Learning about and making plans to build an island of comptence would not be out of order.

This entry was posted in Africa, Blacks and crime, China, Crime, Demographics, IQ and tagged islam, race and crime. Bookmark the permalink.