Global Oil Prices: Calm in the Midst of a Tempest 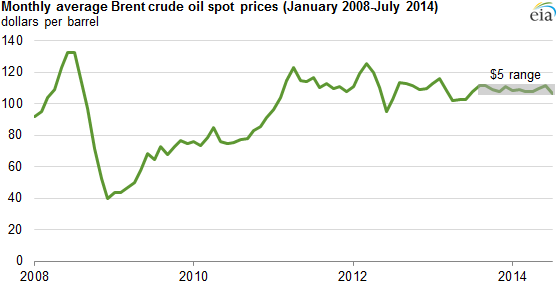 Something strange is happening in global oil prices: About 3.5 million barrels per day have been removed from global output — and oil prices went down!

What’s really remarkable about this recent decline is that it occurred despite the fact that nearly 3.5 million barrels per day of global oil supplies — representing about 4% of daily output — have gone offline since the beginning of 2011. Here’s a chart from the U.S. Energy Information Administration that shows the severity of recent years’ supply disruptions:

So, why haven’t oil prices spiked? It’s mainly because these supply disruptions in places like Libya, Iran, and Nigeria have been offset by the rapid growth in U.S. crude oil production over the same time period. Thanks to a combination of horizontal drilling and hydraulic fracturing, U.S. oil production surged from roughly 5.6 million barrels per day (bpd) in 2011 to nearly 7.5 million bpd in 2013. __ MotleyFool

Global price stability in oil markets is very bad news for national governments which use oil & gas profits to finance their national budgets — particularly if fiscal breakeven requirements for these governments is above the prevailing market prices.

Putin’s Russia is in a particular pickle, since Putin’s plans for neo-empire depend heavily on higher oil prices — and the ability to hold its energy customers such as Europe, in thrall (over a barrel).

Besides the fact that he cannot seem to nudge global oil prices higher no matter what he does, Putin is particularly irritated that the US (and allies such as Canada and Australia) is enjoying an oil & gas renaissance at this time. The petroleum booms in such Anglospheric countries help to keep global oil prices low — just when Putin needs them to rise by about 20% or more.

And so Putin takes the next step to a wider war: The stealth invasion of Ukraine.
“Accidentally” Captured Russian Soldiers Confess

Meanwhile, Anglospheric energy booms are leading to a shortage of skilled workers:

… oil and gas companies are rushing to figure out how to keep their staffs filled.

And not just in the oil field itself. Depressed oil prices in the 1990s turned many professionals away from the industry, resulting in what has now turned into a shortage of engineers and executives. Companies are working with universities and even high schools to get more people trained, a high-stakes process insiders refer to as “the great crew change.”

“You’re starting to see the industry come under a lot of stress,” Caplan said. “It’s probably the No. 1 topic right now: How do we bring more people into the industry?” __ http://www.dallasnews.com/business/energy/20140820-as-oil-boom-continues-theres-no-end-in-sight-for-job-growth.ece

One of the biggest dirty secrets of the energy world is the role that western environmental activists and government sympathizers are playing in retarding the growth of energy production:

Three major stories about the Green movement and its ties to major Left-wing foundations and Left-wing journalists have been in the news.

The extent to which these faux environmental groups are obstructing a clean and abundant future is censored in the skankstream media sources. But those who are better informed can find ways to discover the truth behind “the truth.”

And so we see that Putin and Chinese neo-imperialists are not the only obstacles to a peaceful, clean, and abundant future. The lefty-Luddite dieoff.orgiast greens are playing a huge role in the movement to obstruct a better future, as well.

Eventually, there will be a reckoning. And that is something that some of these people who are currently flying quite high on corrupt government largesse, will not like.