Demographic Change: The World You Think You Know is Being Overturned

Economic Foundations are Eroding Beneath Your Feet

Young people have more dopamine, more testosterone, more vim and vigour. It is the natural life drives and ambitions of the young and middle-aged in high-IQ societies that drives the economic engines of their societies. Demographic balance in advanced societies is shifting to include many more old people.

The Moody’s rating agency ((NYSE:MCO)) has published a report predicting that the number of “super aged” countries, those with more than 7% of their population over the age of 65, will increase from three to 13 by 2020, and 34 in 2030.

The implication is that the global demographic dividend the world has enjoyed over the last 40 years is about to turn into a tax, a big one. The consequence will be lower long-term growth, possibly by 0.5%-1.0% less than we are seeing today.
__ http://seekingalpha.com/article/3974920-cost-aging-world 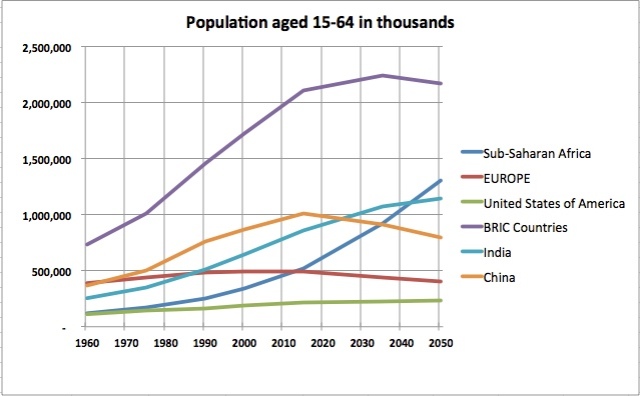 Universities and lower schools are already feeling the pinch across many regions and nations. The phenomenon is felt most keenly in nations such as Japan and Germany, but large parts of Eastern Europe, Southern Europe, and much of the Anglosphere are being affected. China is losing its college-age population rapidly, but desperation over China’s future is causing many families to send more young people overseas to college, and damn the expense.

The UN statistics show that from 2010 to 2015, the Chinese 18 to 23 population has already dropped by nearly a quarter, and yet the number of overseas Chinese students nearly doubled in that period (see graph on Chinese student growth, below). In other words, demand for foreign university education has been so great that it has more than cancelled out a dramatic shrinking of the university-age population.

… economic instability could create an incentive for Chinese families to have someone “on the outside”; having a relation with experience in the West can be part of “a larger family strategy, where it keeps its [emigration] options open”.

Russian parents would be equally wise to send their children overseas whenever possible. Russia’s educational systems — and the rest of Russian infrastructure — have lost mojo up the kazoo. Perhaps as many as 50% of Russia’s top managers want to relocate to the US, Germany, and Britain. The number is difficult to pin down due to the harsh penalties for speaking one’s true mind inside Russia Today.

Demographic change has been particularly unkind to Russia these past decades.

From steamy Miami to the thriving cores of cities from New York, San Francisco, Houston and Chicago, swank towers, some of them pencil thin and all richly appointed. This surge in the luxury apartment construction has often been seen as validation of the purported massive shift of population, notably of the retired wealthy, to the inner cities.

The great “return to the cities” was supposed to be the way of the future. But without children, there can be no future to continue fueling the great return.

Over the past two decades, the percentage of families that have children has fallen in most of the country, but nowhere more dramatically than in our largest, densest urban areas. In cities with populations greater than 500,000, the population of children aged 14 and younger actually declined between 2000 and 2010, according to U.S. Census data, with New York, Chicago, Los Angeles, and Detroit experiencing the largest numerical drop.

These are four of the more corrupt cities in the US, but living expenses – taxes – student debt – and an extended adolescence all combine to doom the “formerly great” return to the city to childlessness.

The Two Universities of California

Another destructive demographic trend for modern societies (and their universities) is the demand for multiculturalism in its most wasteful and malignantly capricious forms.

Today, echoing Kerr, we can say that there are two Universities of California: UC One, a serious university system centered on the sciences (though with representatives throughout the disciplines) and still characterized by rigorous meritocratic standards; and UC Two, a profoundly unserious institution dedicated to the all-consuming crusade against phantom racism and sexism that goes by the name of “diversity.” Unlike Berkeley Two in Kerr’s Day, UC Two reaches to the topmost echelon of the university, where it poses a real threat to the integrity of its high-achieving counterpart.

This grand erosive schism is prominent in society at large. Governments, media, schools, and businesses are being pressed to promote unqualified — sometimes catastrophically unqualified — applicants, contractors, and executives, all in the name of the diversity monster. Groupthink political correctness reigns over the demographic suicide of the west.

This destructive trend is taking place in Europe, across the Anglosphere, and wherever else political correctness and affirmative action have achieved a chokehold.

Africa and other low-IQ impoverished regions have expanding populations. Wealthier nations with higher IQ populations are typically shrinking in population size. In the wealthier world, the only populations that tend to be growing rapidly are subpopulations of lower-IQ immigrants and the underclass.

No One in the Mainstream Wants to Address These Issues

Any attempt to discuss these topics on modern university campuses is likely to create a riot. The same level of self-censorship applies in newsrooms, legislatures, and board rooms. The modern world cannot handle the truth, and would rather be invaded by armies of violent immigrants and cyber thieves / saboteurs from League nations, than to face the demographic hurdles that confront it.

Dangerous Children, of course, understand these issues from a very young age, primarily because such an understanding is crucial to the ability to weather future turbulence.

Abortions, alcoholism, despair over falling living standards, rising crime, and a collapse of opportunity / rise in corruption, can shape the decision of whether to give birth and provide a good environment for a child.

There were 930,000 abortions in Russia as a whole in 2015, the report said, citing official statistics.

Irina Soldatova, the deputy health minister of the Moscow region, said that 85 percent of the time, the decision to have an abortion is the independent choice of the woman and done for reasons other than health: housing problems, strained finances, absence of husband, other children present in the household.

Russia cannot afford a million abortions a year, with its shrinking population of ethnic Russians — being replaced by Central Asians and other muslim newcomers.

Russians are once more being thrown into a situation where the conditions that caused skyrocketing mortality among Russian males in the 1990s and early 2000s are being revived. As illegal moonshine consumption and illegal abortions rise, mortality rates — even if not admitted by state statisticians — cannot help but rise apace. The population of ethnic Russians is expected to drop by up to one half by the year 2050.

a Moscow State University demographer says, the population of the country would decline by half over the next 50 years. In fact, it is likely to decline further and faster than that.

In an interview posted by Stoletiye.ru yesterday, Anatoly Antonov notes that fertility rates in Russia stood at 1.2 children per woman in 1992, rose to 1.4 in 2007-2008, and now stand at “approximately 1.6.” That has given rise to much optimism, but that optimism is misplaced.

Duplicitous grad students Karlin and Adomanis claim to believe official Kremlin statistics which state that “all is well” and nothing bad can possibly happen under the wise leadership of Putin and his cronies. Perhaps they are that unintelligent, but more likely they are spinning to please the corrupt inner circle.

As ethnic Russians continue to be replaced by Central Asians in the cities, and by ethnic Chinese in the Far East, the soft underbelly of Russia — Central Asia — is being increasingly dominated by China, and growing hostile to Moscow.

Moscow seems convinced that the situation in Kazakhstan emerged precisely because the share of ethnic Russians in the population there has declined so precipitously over the last 30 years. Up until 1985, ethnic Russians had a plurality; now, they are outnumbered two to one by ethnic Kazakhs. Because similar trends are occurring in all the post-Soviet states, some in the Russian capital fear that what is happening in Kazakhstan could happen elsewhere sooner or later. On that, see nr2.com.ua/News/politics_and_society/Kazanskiy-Rossiya-poka-ignoriruet-derusifikaciyu-Kazahstana-120399.html.

· And fifth, although it is unclear how widespread this fear is, at least some in Moscow are expressing concerns that what has occurred in Kazakhstan is what faces Russia in the near future. 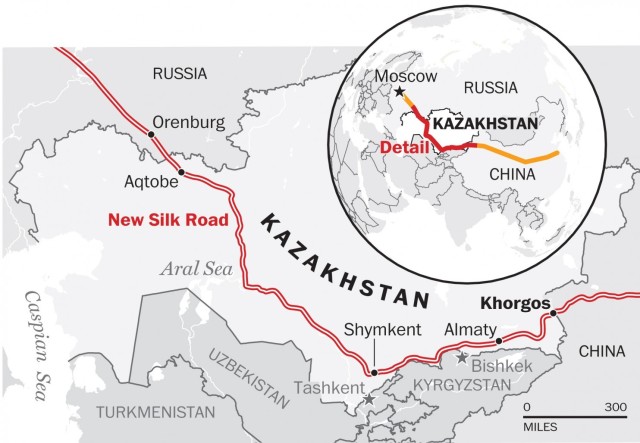 As ethnic Russian demography collapses, the Chinese can be expected to move along well-prepared invasion routes with the complicity of a Muscovy government that has been well and truly bought. The coming bloodless invasion and takeover of Muscovy by China will be seen as a way to save Russia from a homegrown Maidan style grassroots revolution as has occurred in other former Soviet states.

Demographic change has consequences — different for each nation and population. Statisticians can lie for years in the service of state propaganda, but eventually the foundation beneath them will erode and collapse for everyone to see.

5 Responses to Demographic Change: The World You Think You Know is Being Overturned