The Coming Doom of the “Y” Chromosome and Human Males 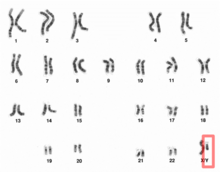 Although the Y chromosome’s role in sex determination is clear, research has shown that it is undergoing rapid evolutionary deterioration. Many generations ago the Y chromosome was large, and contained as many genes as the X chromosome. Now it is a fraction of its past size and contains fewer than 80 functional genes. This has led to debates and concerns over the years regarding the Y chromosome’s eventual destiny. Many speculate that the Y chromosome has become superfluous and could completely decay within the next 10 million years. ___ Uncertain Fate of Y Chromosome

I need not paint in graphic detail the fate of the human race should the essential functions of Y chromosome genes continue to be degraded to a significant degree.

We have seen many reports describing a decline in human sperm quality and quantity across the world.
More:

Sperm counts — measured by sperm concentration or total sperm count — declined by 1.4% per year on average among men from North America, Europe and Australia between 1973 and 2011, a new study published in the journal Human Reproductive Health found. Overall, sperm counts fell between 50% and 60% over those 38 years, with no evidence of a leveling off in recent years. This significant decline in male reproductive health “has serious implications beyond fertility concerns,” it concluded. The researchers analyzed samples from nearly 43,000 men from 185 studies.

“This population-level decline in testosterone concentrations in men is not explained fully by the usual suspects: increasing BMI and prevalence of obesity, certain other co-morbid conditions or decreasing incidence of smoking. Although the analysis by Travison et al did reveal significant age-related increases in adiposity and medication use and a welcome decline in smoking, the age-matched decline in testosterone concentrations persisted even after adjusting for these variables,” Shalender Bhasin, MD, of the section of endocrinology, diabetes, and nutrition, Boston University School of Medicine, wrote in an accompanying editorial.

As more genes are lost from the Y chromosome over time, it is likely that some of these lost genes will have played a significant role in supporting traditional male behaviours and functions — without which the future of the human collective will be compromised.

Other Signs of Male Decline

If a young woman cares about the health and longevity of her prospective child, she may wish to bypass her contemporaries and seek out an older man — with longer telomeres — to father her child:

The increase per year of a man’s delay in reproduction roughly equalled the amount of annual telomere shortening observed in middle-age adults.

The findings published in Proceedings of the National Academy of Sciences suggest delayed paternal reproduction can lead to cumulative, multi-generational increases in telomere length in descendants – which could promote long life.

Telomeres have been called the “chromosomal clock” because they seem to be central to biological ageing. Longer telomeres are a sign of being biologically younger and healthier. __ https://www.telegraph.co.uk/news/science/science-news/9325945/Children-of-older-fathers-are-more-likely-to-live-longer.html

The above findings by Professor Christopher Kuzawa at Northwestern U. are interesting, and have many distinctly different possible explanations. But I suspect that one of the reasons that these older fathers (and older grandfathers) yielded children with longer telomeres, may be that these men were born earlier in the process of the long decline of the Y chromosome.

More in depth look at the phenomenon of older fathers and longer telomeres — this article helps to explain some of the mystery, and lays much of the blame at the feet of a female germline-controlled ongoing decline in human telomere length.

Without the ability to recombine during meiosis, the Y chromosome is unable to expose individual alleles to natural selection. Deleterious alleles are allowed to “hitchhike” with beneficial neighbors, thus propagating maladapted alleles in to the next generation. Conversely, advantageous alleles may be selected against if they are surrounded by harmful alleles (background selection). Due to this inability to sort through its gene content, the Y chromosome is particularly prone to the accumulation of “junk” DNA. Massive accumulations of retrotransposable elements are scattered throughout the Y.[16] The random insertion of DNA segments often disrupts encoded gene sequences and renders them nonfunctional. However, the Y chromosome has no way of weeding out these “jumping genes”. Without the ability to isolate alleles, selection cannot effectively act upon them. __ Wikipedia “Y Chromosome”

The Y chromosome is subject to damage from internal processes as well as from external processes — including environmental toxicity or nutritional deprivation. Since it has no good way to eliminate bad gene sequences, the damage is cumulative over time.

This suggests that society may wish to begin banking human sperm from suitable males, on a significant scale. More research on long-term human sperm storage is needed to assure viability over a long time scale. While the use of donor sperm from an earlier stage in the decline of the Y chromosome cannot possibly erase damage that has already occurred — in both the male and female germlines — it can sidestep some of the problems and allow more time for better solutions.

Fortunately, we do have some time. If only we could step away from the die-off tendencies of our leftist overlords and face the future objectively without all the PC censorship and postmodernist nonsense.

Why young women should seek out older men to father their children — for the good of the species!